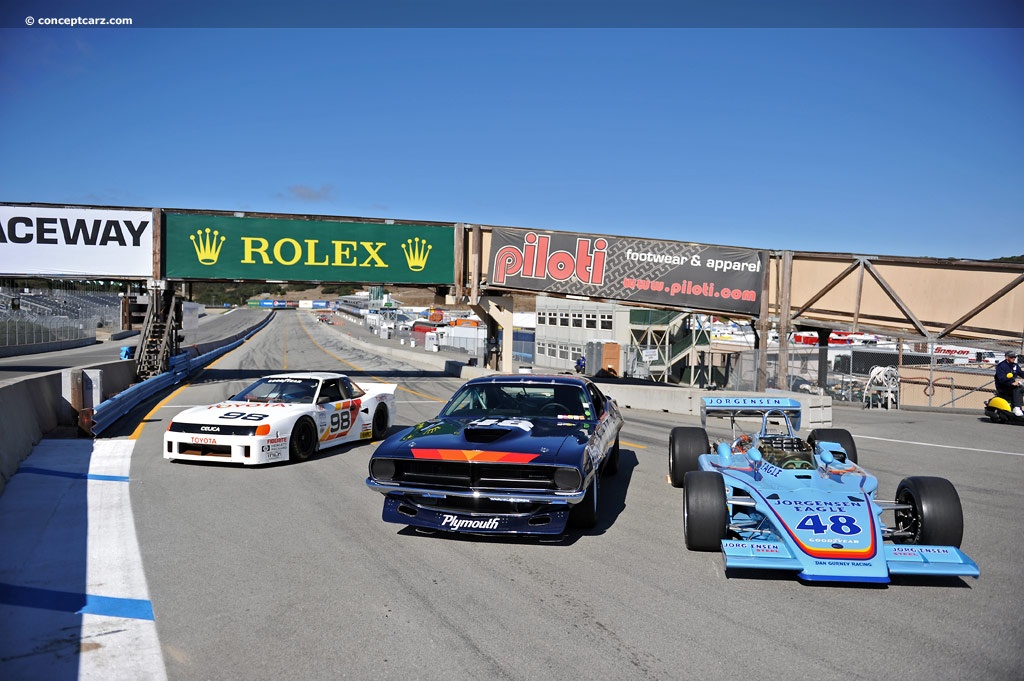 The Ford Mustang birthed the new Pony Car market and was the catalyst for other manufacturers to follow suit. Ford's sporty new compact was based on the inexpensive Falcon chassis and running gear and offered with a slew of engines, options, and configurations. Using the compact Valiant line, Chrysler stylist Irv Ritchie penned a fastback entry for the rapidly growing sports-compact Pony car segment. Although the name Panda was considered, it was John Samsen's suggestion of barracuda that ultimately won.

Chrysler introduced its Barracuda model on April 1st of 1964. It was based on Chrysler's A-body line, rested on the Valiant's 106-inch platform, and incorporated many Valiant body pieces including the bumpers, quarter panels, doors, windshield, headlamp bezels, hood, and A-pillar. Powertrains were identical to the Valiants, including two versions of Chrysler's slant-6 six-cylinder engine. The most potent option for 1964 was Chrysler's all-new 273 cubic-inch LA V8 equipped with a two-barrel carburetor, producing 180 horsepower.

The first generation of the Barracuda was built through 1966, followed by the second generation of 1967 through 1969. Its A-body wheelbase now measured 108 inches and continued to share many body and mechanical components with the Valiant.

The muscle car era peaked as the 1960s were coming to a close, as insurance companies and government regulations were beginning to tame the horsepower figures that had escalated to all-new heights. Many of these performance machines had been built to homologate special equipment for racing purposes and others were for the pure satisfaction of building the most dominant street machines of the day. Among the list was the Hemi 'Cuda that used the simple formula of a light mid-size body and shoehorned the company's most potent powerplant under the hood. In Plymouth's case, it was the 427 cubic-inch street 'Hemi' that topped the line.

For 1970, the Plymouth Barracuda moved upscale with the arrival of the new E-body platform (a shorter and wider version of Chrysler's existing B platform), and wore new styling by John Herlitz. Along with being wider, lower, and longer, the new cars were also sleeker, short deck proportions, and classic 'pony car' long hood. All of the previous commonality with the Valiant was removed, and the original fastback design was dropped, and body styles now consisted of a coupe and convertible. The E-body's engine bay was larger than that of the previous A-body, accommodating the release of Chrysler's 426 cubic-inch Hemi.

Both the 1970 and 1971 Barracuda were offered as the base (BH), the luxury-oriented Gran Coupe (BP), and the sport model 'Cuda (BS). Beginning mid-year 1970, there was also the Barracuda Coupe (A93) that served as an entry-level model that came with the 198 cubic-inch Slant Six engine as standard, lower-grade interior, and fixed quarter glass instead of roll-down rear passenger windows.

Engine options included two six-cylinder versions of the slant-6, a new 198 CID and the 225, as well as three different V8s (the 318, 383 with a two-barrel carburetor and single exhaust, and the 383 with a four-barrel carburetor and dual exhaust). The Cuda came with the 383 cubic-inch engine with 335 (SAE gross) horsepower as the base engine. Additional options included the 440 CID four-barrel Super Commando, the 440ci six-barrel Super Commando Six Pak, and the 426ci Hemi. The Hemi and 440 CID equipped cars received structural reinforcements and suspension upgrades to cope with the power.

The Hemi 'Cuda was Plymouth's top high-performance car for 1970 at a premium of $871 over the basic 'Cuda's $3,164 starting price. The new street Hemi engine for 1970 now came with a maintenance-free hydraulic camshaft with a similar lobe profile to the prior mechanical unit for greater ease of operation. Hemi-equipped cars came standard with the menacing 'Shaker' col-air hood scoop, power-assisted front disc brakes, bucket seats, center console, elastomeric bumpers, Rallye instrument cluster, and heavy-duty underpinnings that included carefully selected rear leaf springs at no additional cost. A total of 652 examples of the Hemi 'Cuda hardtops were built for sale in the United States for 1970, including 284 equipped with the four-speed manual transmission.

Competition
Dan Gurney and Swede Savage raced identical factory-sponsored AAR (All American Racers) 'Cudas in the 1970 Trans-Am Series. During the season, they earned three pole positions and the highest finish was a second-place at Road America. The Road-going version of the AAR 'Cuda was offered to customers and came with the 340 CID 'Six Pack' with three two-barrel carburetors.

The Hemi 'Cuda was very successful in Super Stock and new Pro Stock classes from 1970 through 1972 in the hands of Mopar racers including Sox & Martin until stiff NHRA-imposed weight penalties eroded the Hemi's advantage.
by Daniel Vaughan | Aug 2020

The first series of the Barracuda was produced from 1964 through 1969, distinguished by its A-body construction. From 1970 through 1974 the second series was produced using an E-body construction. In 1964, Plymouth offered the Barracuda as an option of the Valiant model line, meaning it wore both the Valiant and Barracuda emblems. The base offering was a 225 cubic-inch six-cylinder engine that....
Continue Reading >>

A Street Version of Dan Gurney's Trans Am Cars
For a time, Plymouth enjoyed a racing program that cross-town rival Chevrolet didn't, due to anti-racing edicts GM enacted earlier in the 1960's. As the third and smallest of the Big Three, Pl....[continue reading]

For 1970, Plymouth introduced its restyled Barracuda. It was six inches shorter, a few inches lower, and five inches wider. It had the same wheelbase length as its immediate predecessor, yet now it had the muscular proportions that appealed to a ve....[continue reading]

For 1970, the E-body platform became longer, lower and wider and quickly distinguished themselves from their GM and Ford rivals. The redesign was done, in part, to make room under the bonnet for Chrysler's Raise Block engines, both the 440 cubic inc....[continue reading]

In 1970, 2,724 examples of the Plymouth 'Cuda AAR were sold. The 'Cuda AAR package included a six-barrel, 340 cubic-inch small block V8 that was vastly underrated at 290 horsepower, with either a four-speed or an optional TorqueFlite transmission, fr....[continue reading]

For 1970, the Plymouth Barracuda lost the first two syllables of its name and became simply the 'Cuda.' There were three body styles and nine engine options offered, with the most potent being the Hemi 'Cuda powered by Chrysler's 425 horsepower, 426 ....[continue reading]

Plymouth's muscle car was their long hood/short deck version of the Valiant, dubbed the Barracuda. In 1970, the dramatically restyled Barracuda and its high-performance brother, known simply as the 'Cuda, would become some of the most desirable muscl....[continue reading]

This 1970 Plymouth 'Cuda Convertible clone that was originally a 318 cubic-inch Barracuda convertible that was constructed in Plymouth's Hamtramck assembly plant in 1970. The modifications were done by Ultimate Rides in El Paso, Texas in the early 2....[continue reading]

This 1970 Plymouth 'Cuda AAR 2-door Hardtop has 76,048 original miles. It is powered by a 340/290HP six-pack and it features power steering and an axle ratio of 3.55. There are front and rear rubber bumpers and is listed in Galen Govier's registry as....[continue reading]

Two of the most prized options on the 1970 E-Body Plymouth Cuda was the 440 cubic-inch engine and the Shaker hood. The 440 cubic-inch V8 had 3 x 2-barrel carburetors and produced just under 400 horsepower. The E-body configuration was a two-door co....[continue reading]

This car (AAR chassis #50211) is the first of three Plymouth 'Cudas constructed by Dan Gurney's All American Racers (AAR) for competition in the 1970 Trans Am Championship. It was driven by Dan Gurney and Swede Savage during pre-season testing and us....[continue reading]

This is a 1970 Plymouth AAR Cuda 2-Door Hardtop. It is seen here at the 2007 Eastern Concours of the United States.....[continue reading]

This Plymouth Hemi Cuda was constructed in 1970 at the Hamtramck assembly plant and was originally equipped with Plymouth's top-of-the-line 'R'-code 426 Hemi V8 and a four-speed manual gearbox, making it one of only 284 examples specified with this c....[continue reading]

This rare race car is fully documented to be one of the four Hemi 'Cudas exported to France at the request of Henri Chemin, the Director of Chrysler's Racing Department at the time and somewhat of a legend to French motorsports enthusiasts. Chemin ha....[continue reading]

This Plymouth Gran Coupe Convertible is finished in deep burnt orange metaling with matching interior. It is one of sixty-six with a 383 cubic-inch 4-barrel 335 horsepower engine with HD 727 Torqueflite transmission. It has a rare Y-13 VIN code and w....[continue reading]

This Plymouth Cuda is one of 14 known EK2 ('vitamin C') with H6XW (black/white) vinyl interior, optional 'sure-grip' 3.91 rear axle ratio / N95 evaporative emission system. It has a A53 (Trans Am Package) with front power disc brakes and 11-inch rear....[continue reading]

In 1964, Ford introduced the Mustang, leaving the competition in the dust. With some creative shuffling, Plymouth took their similarly sized Valiant, added a curved rear window and some sporty trim, and created the Barracuda. Although it didn't enjoy....[continue reading]

There is no doubt that when it comes to outrageous in-your-face colors for the 1960s and 1970s Muscle Cars, Dodge and Plymouth were at the head of the pack. In mid-1969, they started by offering several special spring time colors such as Bahama Yello....[continue reading]

Originally introduced in 1964 as a fastback, large rear window version of the Valiant; it was offered in 1967 as a line of cars including a fastback, convertible, and a notch back coupe. In 1970, it was totally redesigned with its own 'E-Body' design....[continue reading] 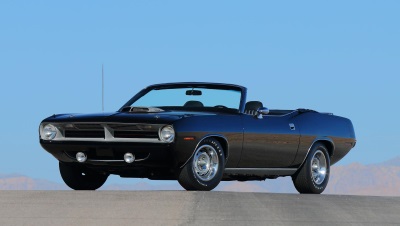 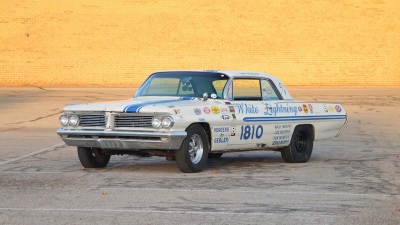 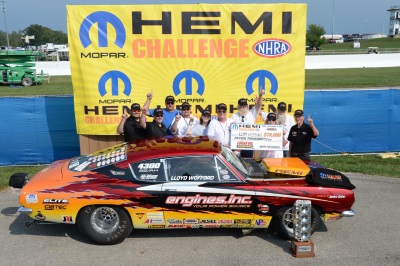 747,508 total vehicles produced by Plymouth in 1970
Total 1970 Plymouth Barracuda production: 0
© 1998-2020. All rights reserved. The material may not be published, broadcast, rewritten, or redistributed.