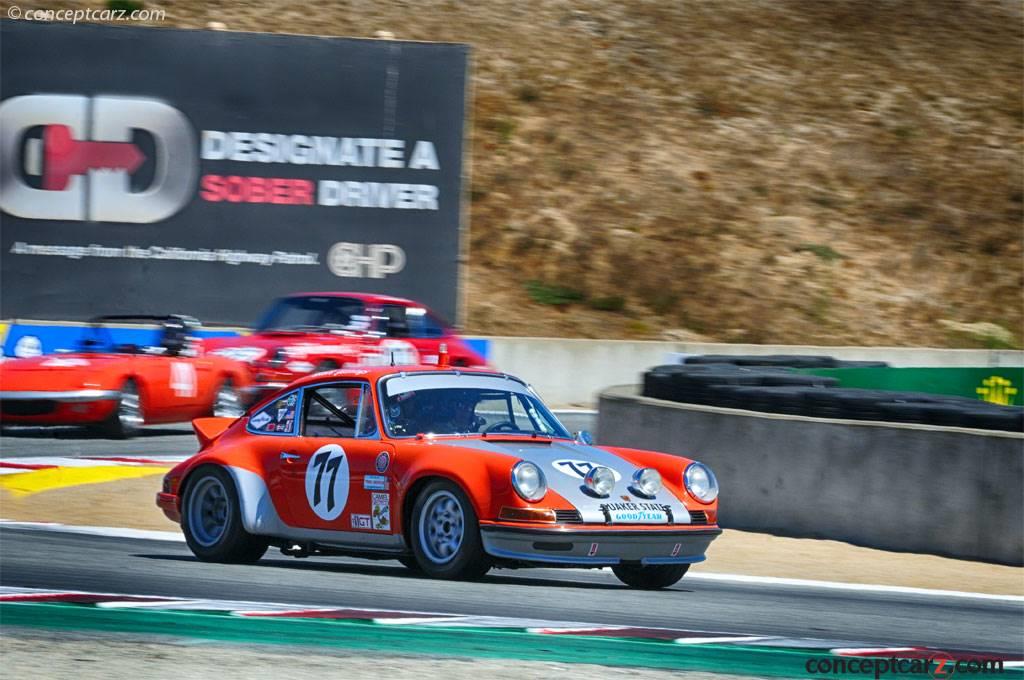 By the mid-1950s, the Porsche 356 was rapidly approaching its development peak, and its small-displacement flat-four engine limited Porsche to class victories in competition despite its durability and effectiveness. The successor to the 356, internally code-named 'Technical Project 7,' or simply 'T7,' had a history that dated back to design sketches by Ferdinand A. 'Butzi' Porsche in 1959.

Testing of the new car began in November 1962 at Porsche's newly constructed track at Weissach, Germany. By September 1963, the new '901,' soon renamed '911' to appease French automaker Peugeot, made its world debut at Frankfurt. Production began in September 1964 and has continued uninterrupted for over five decades. Over the decades it has been relentlessly developed and perfected from launch. Initial competition use focused on rallying, with the new 911's abilities confirmed during the 1965 Monte Carlo Rally, with a 911 piloted by co-drivers Peter Falk and Herbert Linge finishing in fifth. Vic Elford co-drove with David Stone to take victory there with a 911 in 1968. Swedish rally drivers Bjorn Waldegard and Lars Helmer followed up with consecutive wins at the wheel of a 911 for 1969 and 1970. The 911 also took three consecutive European Rally Championships during 1966 (Gunter 'Bobby' Klass G3), 1967 (Sobieslaw Zasada G1/Elford G3), and 1968 (Pauli Toivonen).

The early, short-wheelbase series lasted from 1965 through 1968. By the early 1970s, the 911 had become the company's cornerstone for their competition efforts, with the company's switch in focus from all-out prototypes to production-based GT racing. The lessons learned from racing were later implemented on the road-going cars.

For 1968 the Porsche 911 lineup dropped the high-performance 'S' model. Porsche was unable to comply with the stringent emissions regulation in effect in the U.S market. It would be re-added to the lineup a year later. In its place, the 911L (luxury) was added. The 911L added a leather-covered steering wheel and forged aluminum wheels. Power was from the 148 horsepower (American SAE rating) 2.0-liter flat-six complete with an added air pump and high-performance ventilated disc brakes normally. The new 110 horsepower 911T replaced the base 911 as the entry-level 911 model. European buyers, however, could still purchase the 911S in addition to the L and T models.

The base price for the coupe was $6,200 while the 911L Coupe was priced at $6,800. The Targa sold for $6,600 and the 911L was listed at $7,200. Power was from a horizontally opposed, overhead-cam six-cylinder engine displacing 121.5 cubic-inches and produced 148 (SAE) horsepower. A four-speed manual gearbox was standard and a five-speed manual was optional. A Sportomatic semi-automatic transmission was also optional.

Porsche's new open-air Targa variant was named in celebration of the company's record of success at the Sicilian long-distance road race, the Targa Florio. The Targa body style was made available from December 1966, featuring a distinctive integral roll bar with brushed-aluminum trim, a removable roof panel, and a 'soft' zip-out rear-window arrangement. The fixed glass rear window would not become available until 1968. The 'Soft-Window' Targa would be the closest Porsche ever came to offering a true cabriolet 911 model until 1983.
by Daniel Vaughan | Apr 2019

The 'S' version was introduced within two years of the original 911's launch. It was designed to satisfy the demands of even the most demanding drivers. It had a 2+2 interior and powered by a 2-liter flat six engine, and given subtle details that h....[continue reading]

Judged 'Best Porsche' at the 2007 Pacific Grove Concours Auto Rally, this restored 911T Targa is a nice example of Porsche's base 911 short wheelbase model. Despite reduced output from a milder camshaft and lower compression ratio when compared to th....[continue reading]

Originally built by Porsche as part of a Dutch order of police cars (last in a batch) but intended to come to the United States as a show car. It was shown at Washington, DC, New York, New Haven and Chicago auto shows. Porsche of America also used th....[continue reading]

Tony Adamowicz and Milestone Racing won the 1968 SCCA Trans-Am Championship with 6 wins and 2 second places. With the extensive assistance of the original Milestone Racing Team members and photographer Pete Luongo, this car has been faithfully re-cre....[continue reading]

Assembled in the Porsche Factory Race Department, this car was delivered to Herb Wetanson (Wetson) and entered in several 1968 Trans Am races. One of the most successful early 911 race cars it finished 4th overall and 1st in GT class at 24 Hours of D....[continue reading]

For 1968, Porsche responded to the influx of requests for a competition model with the introduction of aa lightweight, racing 911 L version fitted with the 9552 Rally Kit option. It is believed that just 28 examples with this feature fitted, with jus....[continue reading]

This Porsche 911 Soft Window Targa is finished in Irish green with a brown leatherette interior. It is a matching numbers example that was originally completed on April 30th of 1968 and destined for United States delivery. From the factory, it was gi....[continue reading]

This Porsche is a 911L Soft Window Targa that is powered by a 1991cc SOHC flat 6-cylinder engine fitted with 2 Weber Carburetors and delivers 130 horsepower. There is a five-speed manual transaxle and 4-wheel disc brakes. It has been given a total re....[continue reading]

John Kelly received a Western Union telegram from Porsche of America in October of 1967. Kelly was an SCCA champion and was familiar with Porsche's product. The telegram stated that a limited number of modified 911 R Racing cars were to be built at a....[continue reading]

This Porsche 911 is an original example that is equipped with an intriguing Sportomatic semi-automatic transmission. It was completed on January 9th of 1968 and shipped 20 days later to VW Pacific in Culver City, California. Its first registered owne....[continue reading]

The late Bruce Jennings' race number was 77 and thus it appeared on several different Porsche 911s over his long racing career. This 1968 911S - a 2.0 liter raced in the Trans-Am, IMSA and SCCA series - was bought new by him and kept until he died in....[continue reading]

This 911T was originally delivered with many performance options and has been restored to full FIA (Federation International Automobile, the International sanctioning body of World Championship racing and rallying) specifications using 'sports purpos....[continue reading]

The Porsche 911 L was the most luxurious and expensive version available to American customers in 1968. It was available for just one model year before it was replaced by the E. It is believed that fewer than 500 Ls were ever made. Most of the cars f....[continue reading]

This Porsche 911S Coupe was delivered through Sonauto, the Paris Porsche distributor, on January 22, 1968, and is believed to have come into Canada in the early 1970s through the French Embassy. After years in storage, it was repainted in 1996 in the....[continue reading]

The Porsche highlights for a weekend full of highlights Atlanta, Georgia. For the Porsche Rennsport Reunion V taking place at Mazda Raceway Laguna Seca this weekend, both the men and th...
© 1998-2020. All rights reserved. The material may not be published, broadcast, rewritten, or redistributed.