Ford Motor Company's Special Vehicle Engineering Team (SVE) and Cosworth Technology teamed up to deliver a special breed of a high-performance engine that debuted in the 2002 SVT Focus.

At the heart of the SVT Focus is a normally aspirated four cylinder engine developed jointly between Ford’s SVE team in the Ú.S. and Ú.K. and a project team of engineers at Cosworth Technology in Novi, Michigan, and Northampton, England.

This SVT Focus – the most powerful version of the popular hatchback yet to be released – benefits from a redesigned version of the 2.0-liter Ford Zetec engine.

"This is a high performance engine that will deliver a high level of customer satisfaction because of its good drivability characteristics," says Karl Kollin, SVE Powertrain Engineer. "This is truly a global engine that will be supplied to North America and European markets."

The new engine in the SVT Focus represents several technological 'firsts' for Ford and is designed to provide smooth, almost effortless acceleration, while emitting a growl from the finely tuned engine that is

sure to appeal to any performance enthusiast.

"This engine is about pushing the envelope of the possible on drivable performance, while meeting stringent emissions legislation," says Charles Bolton, Engineering Director, Cosworth Technology. "It was achieved through optimal selection and integration of technical features, with close team work between Cosworth Technology and Ford at every stage. This engine helps set aside the SVT Focus as a real driver's car, and we are proud to have developed it with the Special Vehicle Engineering team at Ford."

Modifications to the engine include a dual-stage intake (DSI) manifold, variable cam timing on the intake camshaft, and an under-body-only catalyst system. Additional new powertrain equipment on the SVT Focus include a dual-mass flywheel (for engine smoothness) and a six-speed manual transaxle, both mark the first use on a front-wheel drive Ford product in North America.

Torque on the vehicle is strongest in the range from 2,200 rpm to 5,500 rpm, where the majority of driving takes place.

"This low-end, drivable torque makes for a more responsive and fun to drive vehicle," says John Coletti, chief engineer at Ford Special Vehicle Engineering. "The power band in this engine will paste a smile on the face of anyone who gets the behind the wheel of the new SVT Focus."

This strong torque at low-to-medium engine speeds is made possible through the use of the continuously variable inlet valve timing, variable length intake manifold and the tuned exhaust manifold.

These modifications increase power output to 170 hp at 7,000 rpm, compared to 130 hp at 5,300 rpm for the 2.0-liter engine in the standard Focus ZX3. The DOHC Zetec I-4 engine in the SVT Focus delivers 145 lb.-ft of torque at 5,500 rpm, 85 percent of which is available at just 2,200 rpm. Compare that to 135 lb.-ft of torque at 4,500 rpm on the standard dress Zetec I-4 engine. "We didn't want an engine that had high specific output and no midrange whatsoever," says Bernard Steeples, a powertrain engineering supervisor at Ford who helped develop the new engine. "We achieved that. This engine delivers torque on demand."

Ford and Cosworth Technology achieved these dramatic increases with a variety of changes to improve breathing and power management, including several technological "firsts" for Ford. The cylinder head is revised to increase flow through the intake ports, and the intake valve diameter was increased to 33.5mm from 32mm . Also, the intake and exhaust valve spring rates have been increased, which contributes to the engine's peak rpm rising from 6,750 to 7,200.

Variable timing has been added to the intake camshaft, which is the first such application on a Ford vehicle in North America. Early Zetec I-4 engines had a variable timing system on the exhaust cam for emissions control, and now SVT Focus has it on the intake side to help increase engine performance.

A new, dual-stage intake (DSI) manifold delivers the maximum amount of air to the intake ports, the first such system ever used on a Ford product. The dual-stage system varies the length of the intake runners, utilizing long runners at low rpm to improve torque development, and short runners at higher rpm for better peak power.

Its more than fitting that we kick off our Year of the Car with Ford Focus – one of the highest quality cars on the road today. With the 2005 Focus, we have taken a great car and made it better. Our newest addition, the 2005 Focus ZX4 ST sedan, has a performance suspension that borrows key components from the SVT Focus and our European Focus ST170, and its powered by a smooth revving 2.3-liter....
Continue Reading >>

BRENTWOOD, Essex, 12 July, 2006 – Sales of Britains top-selling car have broken seven figures, with car number 1,000,000 on display at the British International Motor Show. The 1,000,000th Focus sold in Britain is a five-door, bio-ethanol flexi-fuel vehicle (FFV), and will be handed to its new owner by Ford of Britain chairman Roelant de Waard at the British International Motor Show on Tuesday.....
Continue Reading >>

Theres a reason Fords small car is making headlines.The Ford Focus has been garnering a lot of attention lately. The Ford Focus earned the top rating in the compact car segment in the 2006 AutoPacific Ideal Vehicle Awards. CNNMoney.com named the Focus one of its 2006 Best Cars for Teen Drivers. Focus sales have increased steadily in 2006, driven in part by higher gas prices. May sales....
Continue Reading >>

The Ford Focus WRC Simulator will bring the thrills and excitement of championship auto racing to the 28th Bangkok International Motor Show through the drivers seat of its Ford Focus WRC – winner of the World Rally Championship 2006. The Simulator will make an advance-public preview at Siam Paragons Auto Gallery, 2nd Floor, from March 23-25. Bangkok, Thailand, March 23, 2007 - Ford Thailand....
Continue Reading >>

Visitors to the Motor Expo 2006 voted Ford Focus the best in terms of environmental friendliness. Ford Focus is the countrys first passenger car that is capable of running on either gasoline or gasohol with up to 20 ethanol blend and the countrys best-selling sedan in 2006. Ford Focus has also proven its power by winning the World Rally Championship Mnufacturers title in....
Continue Reading >> 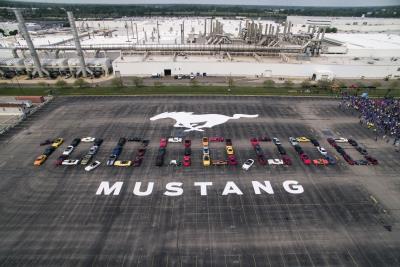 Ford Mustang, a cultural icon inspiring optimism and independence around the world, celebrates the production of its 10 millionth car at Flat Rock Assembly Plant in Michigan Ford Mustang is the best-selling sports car of the last 50 years, is featu...