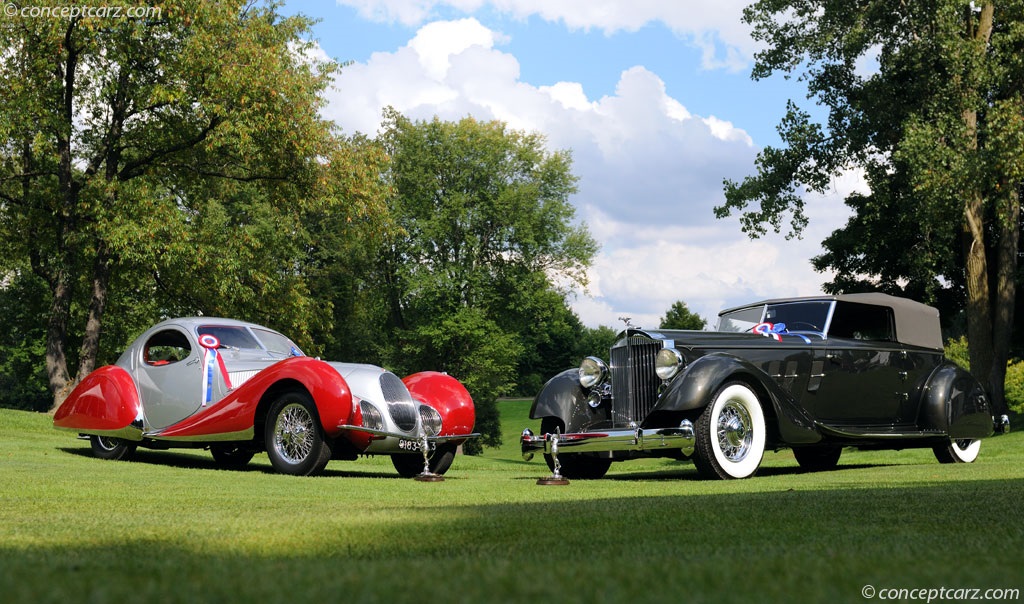 Packard was one of the oldest car companies in America, with the first Packard built-in 1899. The company began life as the Ohio Automobile Company based in Warren, Ohio, and became the Packard Motor Car Company in 1902. In 1903 the company moved to Detroit. The early cars were powered by large displacement six-cylinder engines until Packard introduced a V-8 in 1915. Packard's response in 1916 with the Twin-Six which would remain in production until 1924 when it was replaced by the straight eight.

It was true that during the 1930s, 'It was the best of times, it was the worst of times' as stated by Charles Dickens' novel, A Tale of Two Cities. The world was consumed by the Great Depression leaving few with resources to indulge on automobiles. Yet during this time, some of the most elegant and memorable vehicles were created. Among the most famous and prestigious was the Packard Eleventh Series Twelve.

Packard introduced their first 12-cylinder in 1916 as the Twin Six. The V12 engine had its cylinder banks angled at 60 degrees and a displacement of 424.1 cubic inches, with a rated 88 brake horsepower. In 1932, Packard responded to Cadillac's introduction of its V-12 and V-16 lines with the re-introduction of a new V-12, again called the Twin Six. Despite sharing its name with its predecessor, it was an entirely new design with a 67-degree block and a 445.5 cubic-inch displacement offering 160 horsepower. Realizing it needed to distinguish this new engine from its predecessor, the new Twin Six was soon changed to Twelve.

Prior to the Packard V12 of the 1930s, the company's efforts had been focused on another revolutionary project which did not work out as intended. Packard had been inspired by the Cord L-29 and the Miller engined front-drive race cars. This configuration offered several benefits when compared with the traditional front-engine, rear-drive layout. Packard commissioned the construction of a prototype car and a prototype 12-cylinder, as the shorter length of a V-12, compared with Packard's inline eight, allowed for greater flexibility in packaging the front-drive chassis. Development and testing highlighted inherent weaknesses with the design, and after development costs skyrocketed, Packard was forced to abandon the project. By this point, the cylinder wars were in full effect, and Packard chose to further develop the experimental V-12 engine into a production product.

By 1933, Packard had changed the name from the Twin Six to the Packard Twelve. The 1933 and eleventh series cars were the last to be fitted with the flowing fenders, vee-shaped radiator, and classic lines, before the introduction of the streamlined look. 1934 Packards were given front fenders that now curved down reaching nearly to the front bumpers, which were wider, with stabilizing dampers fitted to the Twelves. Other notable changes included higher seat back, more luxurious upholstery, trunks integrated into the closed car bodies, an oil filter, and motor oil cooled by circulation through a core surrounded by radiator water. By this point in history, Packard had re-engineered their vehicles with shielding wiring, changes in coils to prevent interference, a larger air-cooled generator and a radio head integrated into the dashboard design.

New for 1934 was the first Packard radio option which could be installed into the new dashboard. Packard had experimented with radios since 1929 when Los Angeles Packard dealer Earle C. Anthony led a delegation to talk to radio companies. For 1929, 50 owners had radios installed, though no factory-approved radios were sold until 1932.

The 1934 Packard 1108 was powered by a 445.5 cubic-inch L-head, 67-degree V-12 engine fitted with a single Stromberg EE-3 downdraft carburetor, and offering 160 horsepower. They had a three-speed manual gearbox and four-wheel vacuum-assisted mechanical drum brakes. In the front was a beam-axle suspension with a live-axle setup in the rear, along with semi-elliptical leaf springs. They had a 147-inch wheelbase and could reach top speeds of 90 mph.

Production of the Packard V12 lasted from 1932 through 1939 and helped Packard continue as a leading luxury marque.
by Daniel Vaughan | Jun 2019

The V12 Packards were produced from 1932 through 1939. The 1934s are especially prized for their graceful concession to the trend toward streamlining while still retaining the Packard classic upright body style.....[continue reading]

The individual custom Convertible Victorias was introduced in 1932 and featured the unique V-shaped windscreen and wraparound cowl in the driver's cabin. Another unique feature includes the teardrop-style fenders which required a significant amount o....[continue reading]

The Packard Twelve was introduced in 1933 and over 35,000 examples were produced. It has a powerful 445 cubic-inch side-valve 12-cylinder engine originally used in a Deluxe Eight Chassis and dubbed the Twin Six although the name later changed to the ....[continue reading]

This beautiful LeBaron Sport Phaeton was one of the most recognizable V12 Packard's ever built. It was meant to be a companion to LeBaron's sleek Speedster Runabout. Both aerodynamic open models were heavily based on the designs of stylist Ed Macau....[continue reading]

Packard stole the show at the 1933 Century of Progress exhibition in Chicago with a special Dietrich-designed Sport Sedan that came to be known as 'The Car of the Dome.' The design was such a success that it was offered in their 1934 custom catalog.....[continue reading]

The LeBaron bodied Sport Phaeton was the work of Alexis DeSaknoffsky, an individual responsible for many of the elegant coachbuilt bodies during this Era. Unfortunately, only four examples of the LeBaron Sport Phaeton were ever created during the per....[continue reading]

This 1934 Packard Twelve Model 1108 Limousine was originally owned by oil baron and philanthropist, John D. Rockefeller. The front compartment has leather trim, which was fairly common in chauffeur driven cars at a time when cloth interior fabrics w....[continue reading]

The Convertible Sedan body style was the most popular of the vee-windshield Packards as it offered the intimacy and comfort of a closed car with the top raised and the racy look of a true phaeton with the top down. This example was sold new to the Ma....[continue reading]

This 12-cylinder Sport Phaeton falls into the 11th Series of Packard car production of 1934. The Sport Phaeton, a dual cowl Phaeton an Twelve all-the-way, was another rare body style - style number 280 - and built on the model 1108 147-inch wheelbase....[continue reading]

Penned by Ray Dietrich, the vee-windshield custom body series offered by Packard from 1932 through 1934. The original Dietrich design was slightly updated by Count Alexis de Sakhnoffsky for 1934, with a longer hood flowing over the cowl as seen on th....[continue reading]

Packard was the leading luxury marque at the start of the Classic era. It was one of the oldest car companies in America, with the first Packard built in 1899. The company began life as the Ohio Automobile Company based in Warren, Ohio and became the....[continue reading]

This Dietrich-designed, five-place Victoria features side-windows and an expansive blind C-pillar. The 1934 Packards were subtly modernized from the preceding year, with front fenders that now curved down almost to the front bumpers, which were wider....[continue reading]

Packard built just three examples of the 1934 Packard Twelve with the Dual Cowl Sport Phaeton body by LeBaron. They sold for the sum of $7065. One of the three cars was owned by restorer Fran Roxas. ....[continue reading]

The coupe is often considered the finest extension of basic design when it comes to classic automobiles. In the case of the 1934 Packard, it is certainly epitomized by the Dietrich body Stationary coupe. The distinctive custom coachwork of the Two-Pl....[continue reading]

The Raymond Dietrich bodied Packards were both influential and stunning. One of the highlights was the Convertible Victoria, with its blind quarters giving them an unsurpassed elegance. Unlike the convertible coupe, the car provided far more versatil....[continue reading]

This Packard 1008 Sport Sedan was created specifically to be displayed at the 1933 World's Fair in Chicago, A Century of Progress, which opened in May. It was a Ray Dietrich-style formal sedan modified to present 'The highest expression of the indust....[continue reading]

This Packard 1108 Runabout Speedster has a unique body by LeBaron. The car gives the illusion of motion even at a standstill. There are torpedo fenders and a boat-tail rear-end. The long front end conceals a 7.3-liter twelve-cylinder engine that p....[continue reading]

The Packard Motor Company enjoyed a booming export business, including in Canada. By the mid-1930s, new Packard's were being sent across the Detroit River into Windsor, Ontario, in knocked-down form. The cars were then assembled by the Packard Motor ....[continue reading]

Built in Detroit from 1899 until 1958, Packard was long considered to be the premier luxury automobile. Along with Peerless and Pierce-Arrow, Packard was often referred to as one of the 'Three P's' of American motor car royalty. During the 1930s, whe....[continue reading]

In 1934, the 1108 was the longest of three chassis offered for the 11th Series Packard Twelve, and it was used for the most luxurious models. Like all 11th Series Packards, the Model 1108 featured a smooth-running V12 engine producing a very capable ....[continue reading]

This Derham body Sport Sedan began its life mounted on a 1930 Packard 745 owned by John Bromley. When he purchased a Packard Twelve chassis in 1934, he had the body transferred to that car. ....[continue reading]

The Packard Twelve was one of the finest automobiles produced by Packard and one of the most significant creations of the Classic Era. Most of the 3,500 V-12 engined Packards received factory bodies but this car's coachwork was styled by Raymond Diet....[continue reading]

For decades leading up to the Great Depression, Packard held as much as 50 percent of luxury car sales. Coming off its first profitable year during the depth of the Depression, Packard pulled out all the stops for 1934 in a total overkill of new mode....[continue reading]

Packard added a new twelve-cylinder model to its lineup in 1932, joining Lincoln and Cadillac in the multi-cylinder race. Packard's new engine was used to power its largest and most exclusive automobiles including the sport phaeton. For 1934 the Pack....[continue reading]