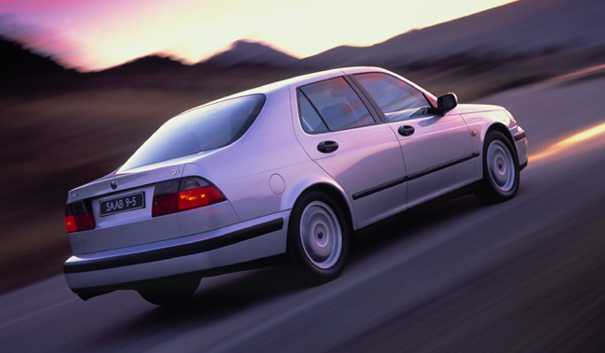 A company that began manufacturing automobiles in 1949, Saab, originally known as Svenska Aeroplan Aktiebolaget (Svenska Aircraft Company), was a Swedish company that early on focused on aerodynamics. Introduced in 1997, the four-door Saab 9-5 was an executive vehicle that was produced as the replacement to the Saab 9000. Representing a huge leap for Saab, the 9-5 was introduced in the spring of 1998 for the 1999 model year. The Saab 9-5 was available with either a four-cylinder or V-6 engines, both turbocharged.Available in both sedan and station wagon body styles, the 9-5 sedan had a drag coefficient of 0.29, while the station wagon was 0.31. To make loading easier, the 9-5 introduced amazing innovation such as tracks to secure cargo down along with a sliding load floor. Advertised as the Saab 9-5, the car was originally badged as a 95. It's important that this model not be confused with the Saab 95 that was produced from 1959 through 1978.
Powered by Saabs B205 and B235 straight-4 engines, the 9-5 was also powered by Alfa Romeo's 1.9 JTD 1V diesel straight-4 engine in Europe. From 1999 to 2003 a version of the GM 54_ V6 powered by a unique asymmetrical low-pressure turbocharger was made available. Only available with an automatic transmission, this engine, and cars with this engine installed were recognizable by their twin tailpipes. This feature was only available on Arc, Griffin, and SE models.
The V6 engine was replaced by a high-pressure turbo straight-4 engine that was capable of producing 200HP in 2004. This engine was able to produce 260HP even in the non-Aero model by 2008. Winning technology and safety awards in Australia, the U.K., and Denmark, the 9-5 continued with Saab's long-standing tradition of offering class-leading safety features and the new availability of ventilated seats with active headrests that moved forward to prevent whiplash when the vehicle was hit from the rear. The 'Night Panel' was also an inventive feature that permits dousing of the lighting from the instrument panel, which aided in lessening the distraction while driving at night.Originally the public was told that the new 9-5 would be unveiled at the end of 2008, but recent reports have suggested that the current 9-5 will be replaced in 2009 for the 2010 model year. Most likely to be constructed in Ruesselsheim, Germany at the Opel plant, the new model will be based on GM's Epsilon 2 platform, shared with the next generation 9-3.In various parts of its native country, Sweden, the Saab 9-5 was used for patrol and undercover police work. In Aspen, Colorado, the City has been utilizing Saabs as patrol vehicles from the early 1970's until 2005 before it was discontinued in favor of the Volvo XC90. Since 1980 the town of Vail, Colorado has been using Saabs until 2005 when the black Saab 9-5 was replaced by Ford Explorers due to budget cuts.By Jessica Donaldson