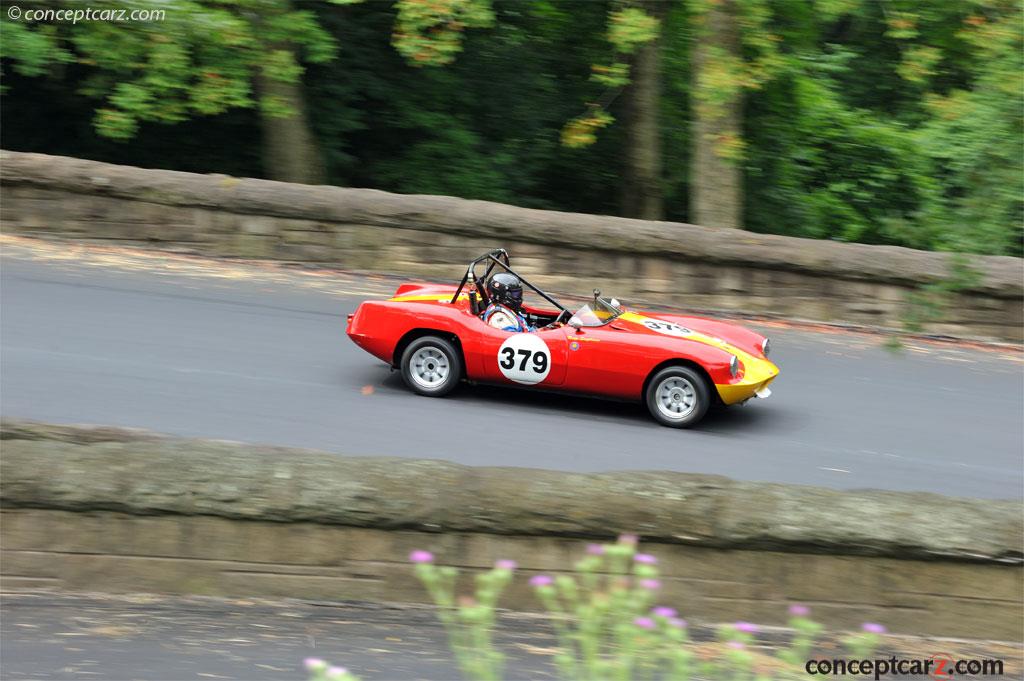 The Elva Courier was designed by Peter Nott and Tim Fry. It featured a fiberglass body construction, making it one of the first vehicles to be outfitted with this lightweight material. The engine was a 1500cc MGA power-plant while the suspension was borrowed from the Riley 1500. The engine was placed in the front of the vehicle, but pushed back as far as possible. This may have created some discomfort for the driver and passenger, but it allowed for a 50/50 weight distribution, enhancing the overall handling and response of the vehicle. The suspension followed this theme by favoring performance rather than comfort. The result was many racing career victories in the American production car circuit. The Courier Mk2 was introduced in 1961. A 1600cc MGA engine was used and could propel the car to over 100 miles-per-hour. A new backbone tubular space-frame chassis and standard front disc brakes improved the ride and the handling.
In 1962, the Courier Mk3 was introduced. The engine and transmission were moved slightly forward. Options such as rear disc brakes and independent rear suspension could be ordered, improving the overall drivability of the car. Three body-styles were now available: the roadster, fastback, and coupe.
By moving the engine and gearbox forward, under-steer resulted. Frank Nichols was asked to helped rectify the problem; which he did so by moving the engine and gearbox back.The Mk4 T type followed the Mk3. The chassis, suspension, and engine received modifications. A 1800cc MGB engine was now available as optional equipment. the front suspension and steering was borrowed from Triumph. A Sebring version was later introduced which featured a light-weight version of the MK4 T Type. A Lotus/Ford 1600cc was used. A prototype Courier using a Ford V6 engine was built. In 1969, the prototype crashed and was never produced. Throughout its lifespan the style of the Courier was virtually unchanged. It saw the company change hands three times, including Elva, Trojan, and McLaren. One of the greatest accomplishments achieved by a Courier during its racing career was with the famous driver, Mark Donahue. In 1961, the duo was the National Class Champion on the US Road Racing Championship (SCCA).
By Daniel Vaughan | Jun 2005

After World War II, Europe was ready to get back to auto racing. Many of the buildings and factories that had produced the engines and chassis before the War had been ruined or transformed into making military vehicles. Club racing offered a competitive means for individuals to enter the racing scene and prove there skills while maintaining a level of affordability. Specialty vehicles were....
Continue Reading >>
Sports Racer Vehicles