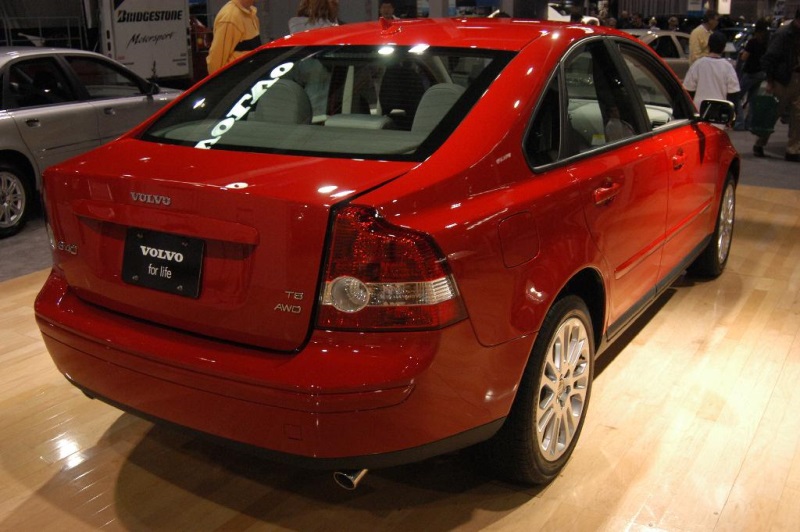 The Volvo S40 is the first new model from Volvo Cars following the success of the Volvo XC90, the SÚV that redefined the segment.

The new Volvo S40 replaces the current S40, which was launched in Europe in 1995. It is the newest addition to Volvo's S-range, which also includes the larger Volvo S60 and S80 models.

Exhilarating design
From the outside, the new S40 is unmistakably a Volvo, a modern evolution of the extraordinary design language that began with the S80 luxury sedan. (concept carz)

The interior is a revolution, with an ultra-slim center console – the first of its kind in the automotive world – creating an aura of exclusivity, simplicity and space. 'The center console is a design icon for the new Volvo S40,' says Henrik Otto, Design Director at Volvo Cars. 'We intend to pursue our position as inaugurators in the car design world, not looking at what our competitors are doing. It is therefore far more valuable to keep an eye on what they're not doing.'

Volvo's Intelligent Vehicle Architecture (VIVA)
In the new Volvo S40, Volvo Cars continues its groundbreaking use of high-tensile steel. In the new front structure, four different grades of steel are used in an intelligent interplay to provide maximum safety for the car's occupants. 'Naturally, our goal is that the new Volvo S40 should be the safest car in its class,' says Volvo Cars President & CEO Hans-Olov Olsson.

Side impact protection is addressed by the use of extremely rigid cross members that form a 3-way attachment between the leading edge of the A-pillar and the base of the B-pillar. Similar cross members are found in the rear doors as well.

This system of energy absorption, along with the new slim-design 5-cylinder engines is called Volvo's Intelligent Vehicle Architecture (VIVA), and represents a new approach to vehicle safety design.

New Volvo Performance
The new Volvo S40 is being introduced with a choice of innovative 5-cylinder engines: a normally aspirated unit producing 168-horsepower, and a 218-horsepower high-pressure turbocharged engine found in the T5. Those who crave an even more dynamic driving experience may equip a T5 with Volvo's new 6-speed close-ratio manual gearbox and electronically controlled all-wheel drive.

Appealing to younger buyers
'With the new Volvo S40, we now offer our customers large-car benefits across the entire line. This, combined with an exciting design and exceptional road manners, makes the new S40 a highly potent challenger in this segment,' comments Olsson.

Expanding the brand to appeal to a broader age range is an important part of Volvo Cars' strategy – it is particularly important that this new model appeal to young buyers. 'We want to attract customers into the Volvo family as early as possible, and the new Volvo S40 will definitely appeal to younger buyers,' said Olsson.

Produced in Ghent, Belgium
The new Volvo S40 will be built in the Volvo Cars factory in Ghent, Belgium, which has been thoroughly remodeled and modernized for this purpose at a cost of $387 million.

Production gets under way this autumn. In 2003, the new Volvo S40 will only be sold in Sweden, reaching markets in the rest of the world in early-to-mid 2004.Volvo Car Corporation expects 2004 sales of the new S40 to reach 70,000 cars. Annual sales for the Ú.S. market, the largest single market for the S40, are targeted at 28,000 units.

The new Volvo S40 is the first in a range of new Volvo models sharing common technology. Next in line is the Volvo V50, a premium activity wagon that will replace the current V40.Source - Volvo

Packing a lot into a compact sedan, the Volvo S40 features numerous safety features, mostly standard, and luxurious detail into its compact package. Enjoying several popular years in Europe the US sales began in 2000 following Fords acquisition of Volvo. For 2004 the Volvo S40 was updated once again with the addition of a more generous interior along with enhanced safety features. Entry-level....
Continue Reading >>

Thanks to its potent turbocharged and intercooled powerplant, precision-tuned handling, communicative steering feel and 4-door configuration, the 2014 Mitsubishi Lancer Evolution is an ultra-high-performance sports car that allows the driver to take...
© 1998-2022. All rights reserved. The material may not be published, broadcast, rewritten, or redistributed.