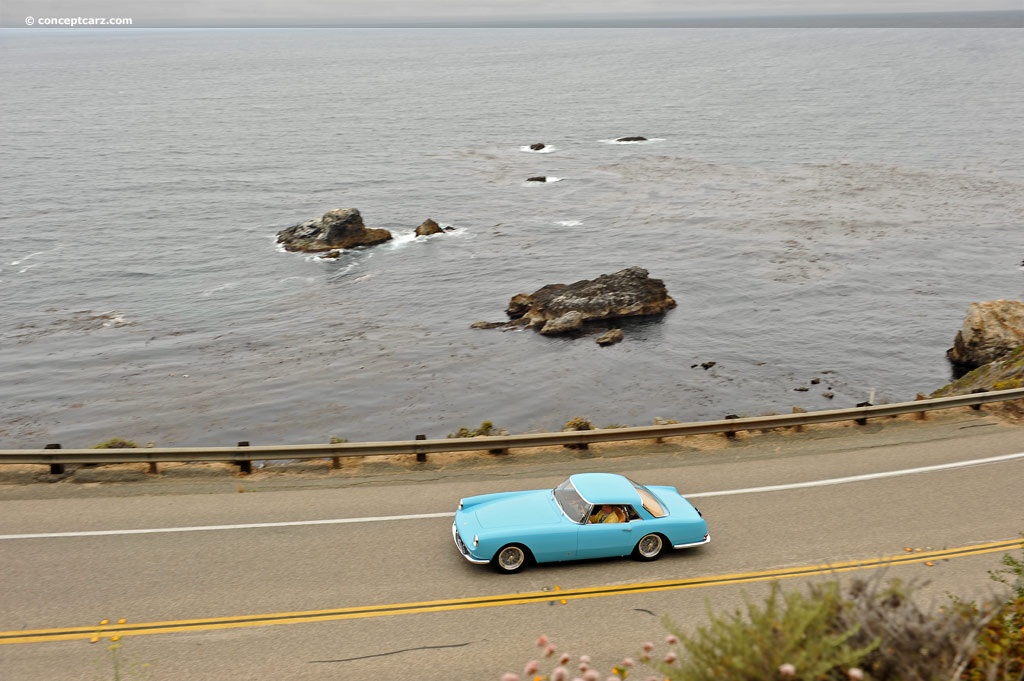 Many of the early models of the 250 GT were 2+2 styled. They had tiny back seats which double as luggage space. The later versions were 2 seaters with a luggage shelf behind the seats.

The 250 is also recognized as the first Ferrari to ever recieve Disc brakes. This did not take place until the end of the 1950's. Also, the 250 was the first four-seater, and the first commercially available mid-engined Ferrari.

The Ferrari 250 GT used a Colombo 60-degree single-overhead-cam, 'vee' type 12-cylinder. There were two valves per cylinder, single overhead cam. The engine had aluminum alloy block and heads with cast-iron cylinder liners. The horsepower produced was in the neighborhood of 220-260. In 1960-1962, the horsepower was increased even more for the short-wheel base (SWB) version to 280 bhp. Seven main bearings and three twin-chose Weber carburetors were used.About 22 of the Series 1 Europa were produced in 1954. The vehicle was displayed at the 1953 Paris show. Also at the show was the Ferrari 375 America. Both vehicles had the same chassis and wheelbase.

Many Italian coachbuilders were given the opportunity, as was the style of early Ferrari, to provide the body-work for the cars. However, the majority of the coachbuilding was done by Pinin Farina. Vignale did atleast one cabriolet and four coupes.

The 205 Europa recieved the smaller of the Lampredi engines. The V-12 engine produced 2963cc. It was a 60-degree, single-overhead-cam, 'vee' type 12-cylinder with aluminum alloy block and heads. With the backing of a 200 horsepower engine, the vehicle was able to muscle its way to a top speed of around 135 mph. Similarly to the 342 America, an all-syncromesh four-speed transmission was used.

Almost all the Europa's were sold in America.

Gioacchino Colombo started out being the primary builder of Ferrari's engines in the late in 1940's and a major contributor to the success of Ferrari. Aurelio Lambredi became his assistant in 1947. Lambredi soon became convinced that a large engine that was naturally aspirated would have better fuel economy and provide more power. Colombo was of the belief that smaller engine compiled with a supercharger would produce the better results. Ferrari tested Lambredi's idea and proved it to be successful. Lambredi was promoted to chief design engineer and Colombo returned to Alfa Romeo. The Lambredi engines were used in the ladder part of the 1950's.
by Daniel Vaughan | Sep 2011

When 250 GT production began in 1954, a variety of body styles, engines, and coachbuilders were used. Ferrari provided a chassis and an engine, the coachbuilders provided the body and the styling.....[continue reading]

Built specifically for Prince Bernhard of The Netherlands, this unique Ferrari 250 GT Speciale (chassis 0725GT) shares several styling details with the 400 and 410 Superamericas designed by Pinin Farina. These large-displacement Ferraris were produce....[continue reading]

Pinin Farina was selected to build the first 250 GT Cabriolet on chassis 0655GT. It was destined for the 1957 Geneva Motor Show. It was well received and laid the groundwork for the series of 39 more cabriolets that followed. The design included trai....[continue reading]

Carrozzeria Boano was the first coachbuilder to design a convertible body for Ferrari's new 250 GT chassis, and its flamboyant design marked the beginning of a new era for Ferrari. The following year, in 1957, a prototype 250 GT Cabriolet, designed a....[continue reading]