The CanAm series was astonishing and 'wide open.' There were minimal regulations on the aerodynamics, engine sizes, and vehicle mechanics. The main rules were a body that enclosed the wheels, complied with the safety requirements, and had seating for two.The first Can-Am race was on September 1966 at St. Jovite Raceway. Famous drivers, manufacturers, and cars were entered, totaling 34 entrants. John Surtees of England entered a Chevy small-block powered V8 Lola T-70. George Follmer, Kiwis Bruce McLaren, Chris Amon, and John Cannon also showed up with powerful cars ready to contend for the first ever Championship of Can Am Racing. At the end of the season it was Surtees who was crowned the champion after winning three of the races. Dan Gurney captured a victory at Bridgehampton while driving a Ford powered racer.For 1967, McLaren entered a potent M6A racer which dominated the season with Bruce McLaren easily capturing the championship. The M6A was powered by a small-block Chevy V8 capable of producing over 520 horsepower.
McLaren continued their dominance for the next four years. Dennise Hulme won the Championship in 1968 and 1970 with Bruce McLaren securing another championship victory in 1969. Bruce McLaren was killed while testing a McLaren Can-Am car and was not around to compete during the 1970 season.
Though McLaren was a dominate force in CanAm racing, their results were poor in single seater racing in Europe. McLaren had first entered Formula 1 racing in 1966. Stiff competition from companies such as Ferrari and Lotus kept McLaren from achieving any significant success. Changing rules were difficult to keep up with and demanded a high price to introduce new technology that would be competitive. For 1970 McLaren introduced the M14 which was basically an evolution of the M7 that had debuted during the 1968 season. Though these iteration cars had done well in CanAm racing, more was required to compete in Europe. A Cosworth DFV engine provided the power and bolted to a conventional monocoque frame. Denny Hulme and Bruce McLaren drove the vehicles to a couple of second place finishes early in the season. This success was short lived as Bruce McLaren was in a fatal accident while testing the newest CanAm racer. Shortly thereafter, Denny Hulme burned his hands at Indy, making it nearly impossible for him to drive. Even with these unfortunate set of incidents, team McLaren continued to dominate CanAm racing. In Formula 1, however, they were losing to the competitive and well-funded Ferrari and Lotus teams. At the conclusion of the season, McLaren was in fourth position in the Constructor's Championship which they shared with Brabham. Ralph Bellamy was tasked with designing a new Formula 1 racer. The outcome of his efforts was a 'coke-bottle' shape with a fiberglass body, aluminum monocoque frame and a Cosworth DFV engine. It was dubbed the M19. For 1971 McLaren adapted a new suspension and added 'A' to the end of the name. Denny Hulme drove his M19 to a respectable sixth place finish in his M19. However, he had been leading and was just four laps shy of a victory when his rear suspension failed. Throughout the season the car would prove to have potential but various reasons often kept the team and driver from podium finishes. The suspension never really worked as intended so for 1972 a more conventional setup was used and the name was changed to the M19C. Sponsorship changed and the team colors were no longer the bright orange.For 1972 Denny Hulme drove his M19A to a first place Grand Prix victory in South Africa. This marked the first time McLaren had achieved this victory since 1968 when Bruce McLaren finished first at Spa in his M7A. This would be the team's only victory during the season but the McLaren team still captured third in the Constructor's Championship. This was accomplished by consistent driving and a number of podium finishes.
For 1973 the M19's were used for a short while before being replaced by the M23. The McLaren M23 F1 racer was based on the Indy racer designed by Gordon Cuppock, McLaren's chief engineer. It proved its potential by capturing 16 victories and two driver's titles.
By Daniel Vaughan | Aug 2006
Concepts by McLaren 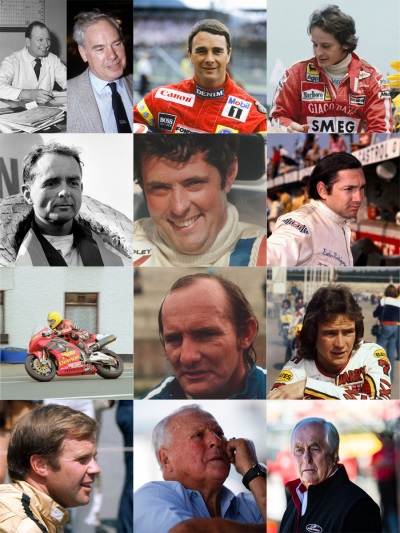 While Formula One will be forever considered the pinnacle of motorsport, from a period between 1966 and 1986 there existed a series that would likely be the closest to anything goes as any motor racing series could truly get. Based upon the FIA Group...
1971 Formula One Season1971 Season Review