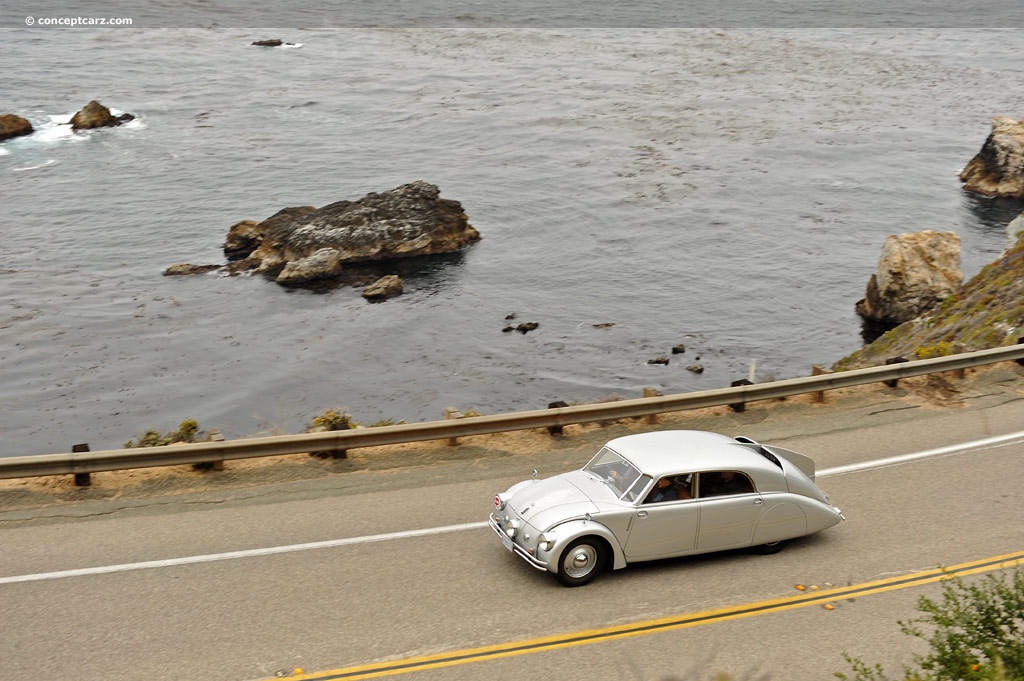 Named after the Tatra Mountains, Tatra was a vehicle manufacturer in Koprivnic, Czech Republic that was founded in 1850. Originally beginning as a wagon and carriage manufacturer, Tatra produced its first motorcar in 1897 in Central Europe, the President. This was the first passenger vehicle in Cenral Europe. Tatra's specialty lay in luxury vehicles of a technically advanced nature.

On March 5th, 1934 the Tatra 77 was introduced to the press at the Prague Auto Salon. The Tatra 77 was a sensation as it was the worlds first serially produced aerodynamic car with a rear-engined air-cooled layout. The T77 overtook the world's motor car industry by several decades.

Following completion of the two V570 prototypes, the Tatra team decided that a new aerodynamic car would only be an additional model. This new vehicle was aimed at the top of the automobile market and would be marketed at a very limited production rate.

This larger and more luxurious car was the top priority for Ledwinka's design team and all present development of the V570 was halted. The Tatra T77 was based on the 1933 V570 prototype and used it as a study model. The design team was attempting to keep abreast of the latest technology, architecture and visual arts. The T77 was designed with the goal of being fast, silent and stable and as a reflection of modern aerodynamic research.

The design team led by Austrian engineer Hans Ledwinka and his son Erich, believed that the introduction of an air-cooled rear-mounted engine would reduce efficiency loss in the drive shaft and noise and vibration that was caused by the drive shaft. The lack of a drive shaft would mean that the passenger compartment would become more comfortable as there would be no central floor tunnel. Passengers could now sit lower and more forward of the rear axle. The inter-axle weight was now evenly distributed which resulted in a lower center of gravity. The front of the vehicle was shortened while the engine mounted in the rear meant that the tail was extended as long as possible.

Tested extensively by Tatra engineers, the first prototype T77 was only a pre-production prototype though Tatra did produce a brochure for this vehicle. The brochure included photos, descriptions and technical specifications. This vehicle was equipped with a rear-mounted air-cooled 90 degree V8 engine that had a cylinder capacity of 2970 cc and a power output of 60 hp at 3500 rpm. The T77 had an impressive drag coefficient of 0.212.

The Tatra T777 was both massive and roomy, with seating for six. There was plenty of luggage space, housed above the rear suspension and in the nose, where the spare tires and battery resided.

The engine power was propelled to the driven rear wheels by means of a four-speed gearbox that was bolted together with the engine and the axle drive as one big monoblock. Housing the gear-change rods, cables and fuel lines, the monoblock was enclosed by the forked welded box frame of the chassis and could be easily removed from the car for repairs and changing parts.

The T77 was slowly produced on a very small scale, with the vehicles behind almost completely hand-built. These vehicles featured leather upholstery and a well equipped interior and were aimed at the top of the automobile market. In a unique twist, a few models had the steering wheel placed in the center of the dashboard. Other T77's had the steering wheel on the right hand side. The front seat passengers were seated on either side of the driver, and the seats placed slightly back.

The T77A was introduced in 1935. The updated and improved model had an increased V8 capacity of 3.4 liters. The increase was made possibly by enlarging the bore diameter from 75 to 80mm. The output was now increased to 75jp and the maximum speed to 150kph. Three headlamps were now added to the front and the central unit was linked to the steering wheel on several models. Now three different directions of the headlight were possible. The lamp was now capable of being turned with the wheel. Several models were equipped with canvas Webasto roofs.

The driving characteristics of the revised Tatra T77 were vastly improved along with the styling being updated nicely.

In between 1933 and 1938 a total of 255 vehicles were produced of the type T77 and the T77a. Since all models were hand built, no two were exactly alike.By Jessica Donaldson

The Czechoslovakian Tatra T77 is the first serial-produced truly aerodynamically designed automobile. It was developed by Hans Ledwinka and Paul Jaray, the noted Zeppelin aerodynamic engineer. Launched in 1934, the Tatra T77 is a coach-built automo....[continue reading]