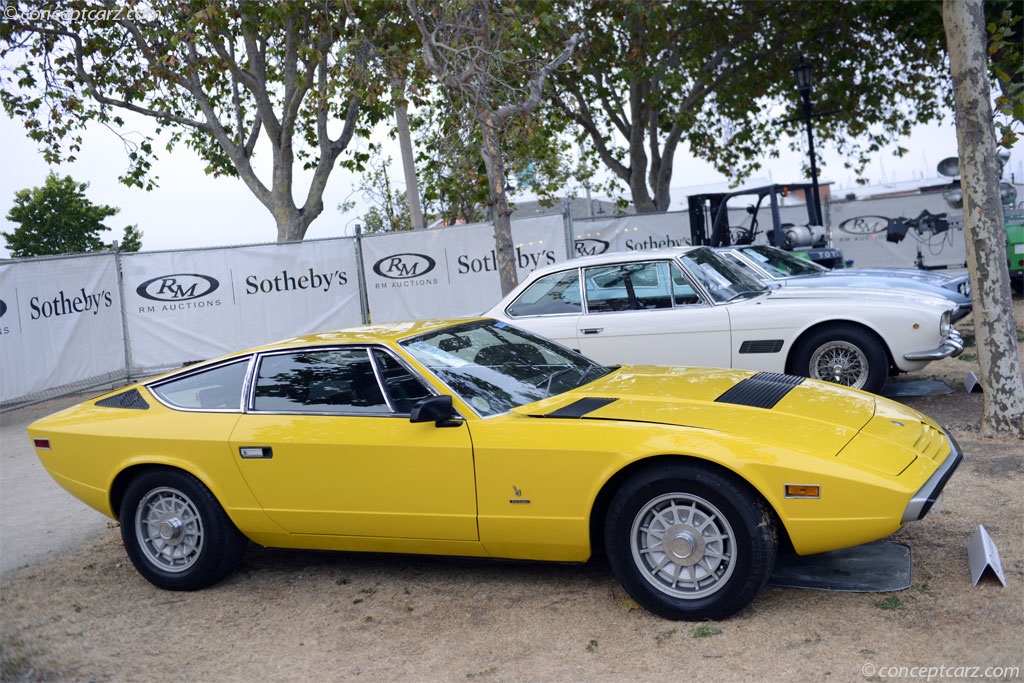 The Maserati Khamsin (Tipo AM120) was introduced in November of 1972 at the Turin Auto Show on the Bertone stand and at the time, it was a concept car wearing a design by Marcello Gandini and was Bertone's first work for Maserati. Intended as a grand tourer with 2+2 seating, the Khamsin had a sharp, angular (wedge shape) design with a clear rear section that housed the 'floating' tail lights, a fastback roofline, and kammback rear end. The bonnet had asymmetrical vents and non-functional triangular vented panels were inlaid in the C-pillar. Most of the design cues and the angular shape were used previously on the Gandini-designed Lamborghini Espada.

Built as a successor to the Maserati Ghibli (AM115), the Khamsin was Maserati's final major introduction while under Citroen's ownership, and the name 'Khamsin' was in reference to a hot Sahara Desert wind. It had unitary all-steel monocoque construction and an all-steel body. The all-independent suspension with double wishbones was similar to that of the mid-engine Merak and Bora, and a major improvement over the leaf-spring solid-axle found in the Ghibli. With the front-mid-mounted engine, the Khamsin had a 50/50 front/rear weight distribution and near-perfect balance. To achieve this, the engine was pushed back towards the firewall, freeing up enough space that a full-size spare tire could be stored beneath the radiator in front, thus freeing up space in the trunk (boot). Like the Ghibli, the Khamsin had dual fuel tanks (but not the same size as the Ghibli), with a small tank on the right connected to the main tank below the cargo floor. Both of these tanks used a single fuel filler on the right-hand side.

The engine of the Khamsin had its lineage going back to Tipo 54, and the formidable 450 S racing car. Apart from the Bosch electronic ignition, the 4.9-liter V8 was essentially the same one powering the Ghibli SS. It had 16-valves, four double barrel 42 DCNF 41 Weber carburetors, dry-sump lubrication, and developed 320 horsepower at 5,500 RPM and 355 lb-ft of torque at 4,000 RPM. The engine was backed by a five-speed, all-synchromesh ZF manual gearbox with a single-plate dry clutch or an optional three-speed BorgWarner automatic transmission. At all four corners were 215/70 Michelin XWX tires on 7½J 15' Campagnolo alloy wheels.

Maserati borrowed hydraulic braking, clutch assistance, and power-steering systems from parent company Citroën, which gave the car's road manners a sophisticated feeling. The driver's seat and headlight pods were also hydraulically actuated. The DIRAVI speed-sensitive variable assistance power steering was sourced from the Citroen SM. The steering was not power 'assisted,' but rather full power devoid of mechanical connection between the steering wheel shaft and the steering linkage yoke attached to the power piston rod. If hydraulic pressure was lost, then the mechanical pinion gear drove the rack gear. This setup was similar to the Citroen DS but the mechanical arrangement was different.

Another innovative and advanced feature of the era was the adjustable steering column. Among the long list of standard equipment included a radio, electric windows, full leather upholstery, and air conditioning. The instrument cluster included gauges from water temperature, oil temperature, oil pressure, voltmeter, speedometer, tachometer, and a clock.

Although the Khamsin had 2+2 seating, the rear seats were small, positioned between the two fuel tanks with minimal amounts of headroom or legroom. The grip level was ultimately inferior to that of the Bora's, but its conventional layout made it easier to control close to the limit. By virtue of its front-engined layout, the Khamsin offered greater practicality, providing a roomier and more comfortable interior and superior luggage carrying capacity than its mid-engine siblings.

Production began in 1974 and continued through 1982 with 435 examples of the exclusive and consummate Grand Routier built during that time. Of those, just 155 were exported to the United States. The Khamsin's successor was the Maserati Shamal, a two-door grand touring coupe with 2+2 seating that was produced from 1990 through 1996 with 369 examples built. Just like the Khamsin, it wore styling by Marcello Gandin and its 3.2-liter twin-turbocharged (with two IHI turbines and intercoolers) V8 produced 322 horsepower and 320 lb-ft of torque. It used a six-speed Getrag G560 manual transmission (the same used in the BMW 850CSi) and Maserati's Ranger limited-slip differential. Thus, the Khamsin was slightly more popular than the Shamal, but not as popular as the Giorgetto Giugiaro (Ghia) designed Ghibli which had 1,295 units built. The Khamsin did, however, succeed in combining classic Italian styling with unique French innovation.
by Daniel Vaughan | Oct 2021

When their company was founded, the Maserati brothers wanted nothing to do with well-mannered street cars. They, like so many grand Italian engineers of their time, wanted only to build the ultimate vehicles of passion racecars for competition purposes. When building nothing but track cars became difficult, the Maserati brothers sold their firm and founded OSCA, a company with which they were able....
Continue Reading >>

The Maserati Khamsin entered the scene in 1972 in concept form at the Bertone stand in Salone di Torino. It had been designed by Gandini, an employee of Bertone. In 1973 it was shown at the Paris Auto Show, this time it featured a Maserati badge. In 1974 production began and continued through 1982. The vehicle was a replacement for the Indy and Ghibli vehicle. The name Khamsin is Egyptian and....
Continue Reading >>

Maserati produced the Khamsin at the 1973 Paris Motor Show. It offered 2+2 seating and was powered by Maserati's 4.9-liter dual overhead cam V8 engine, capable of producing 320 horsepower. It was a very important model for Maserati, as it was their f....[continue reading]

This 1975 Maserati Khamsin was completed in April of 1975 as a United States-specification example. Its 4,930cc dual overhead camshaft V8 engine is fitted with a Bosch Electronic Fuel injection system and develops 320 horsepower at 5,500 RPM. There i....[continue reading]

Total 1975 Maserati Khamsin production: 0
© 1998-2021. All rights reserved. The material may not be published, broadcast, rewritten, or redistributed.