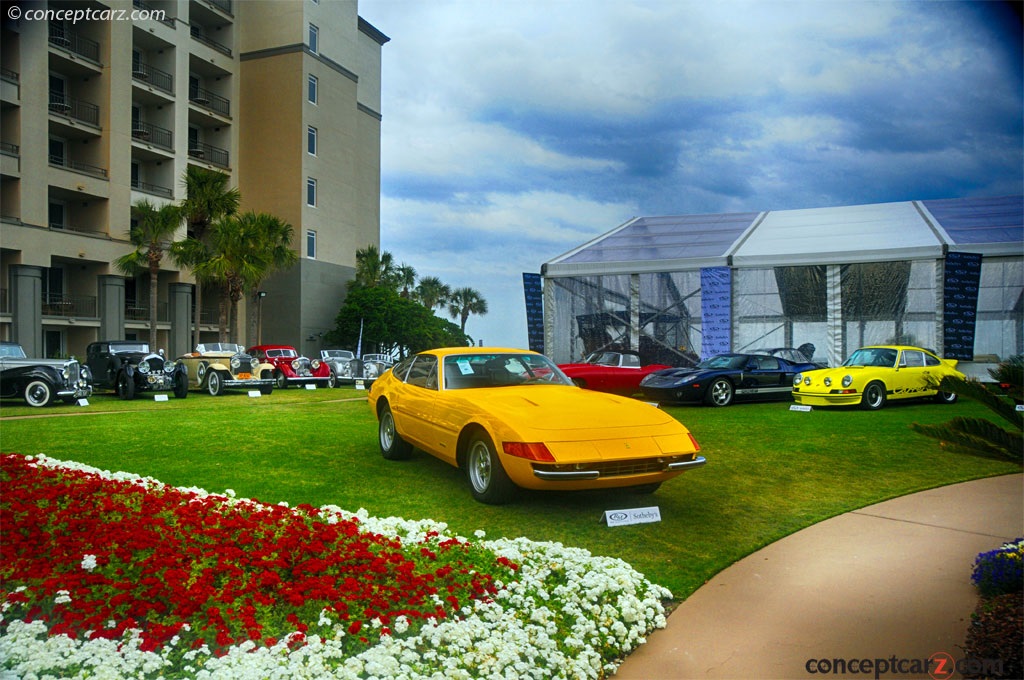 In 1968 the GTB/4 was debuted at the Paris Salon. It was also Ferrari's most expensive production model to-date and the fastest production vehicle of its time. Even though the design was very appealing, it did not sell very well during the first few years of development. Even with perks like running the quarter mile in 13.8 seconds and topping-out at 174 miles per hour.

It was dubbed the 'daytona' in honour of the Ferrari's accomplishments the year before at the American 24 hour race.

Pininfarina designed the fastback coupe and the bodies were built by Scaglietti.

A new V-12 engine was used that was capable of generating over 350 horsepower. It was a dual-overhead-cam 'vee' type 12-cylinder with aluminum alloy block and heads. It used six Weber two-barrel carburetors, four camshafts, and seven main bearings. The five-speed manual gearbox was mounted in the rear transaxle. Ventilated disc brakes helped slow the vehicle down, with a diameter of 11.3 inch in the front and 11.6 inch in the rear.

The early versions of the GTB/4 had exposed head-lights. It was not until 1970 that the headlights were hidden (pop-up). This was due to American regulations concerning full-width plastic headlamps.

Ferrari produced a few berlinetta coupes that consisted of all-aluminum bodies and engines that were capable of 405 horsepower.

The GTB/4 Daytona was replaced by the 365 GT4 BB. The 365 GT4 was Ferrari's catch-up vehicle trying to match other supercar makers such as Lamborghini with its Miura. The engine being set in the middle, rather than in the front.

Ferrari often derived names for cars based upon achievements on the track, or markets that were to be conquered. Such success on the road would give the world the MM, or Mille Miglia. Then there would be the California market and the spyder that woul....[continue reading]

This 1972 Ferrari 365 GTB/4 Daytona was delivered new from the Ferrari factory to the United States. It was sent to Chinetti Motors in Greenwich, Connecticut, originally wearing Oro Chiaro paint and having a black Connolly leather interior. Its ear....[continue reading]

Originally sold to an Italian customer, the car was imported by and owned by former Vice-President of design of General Motors, Chuck Jordan. it was the subject of a practical joke in the styling department when it was given a 'Super-Fly' conversion....[continue reading]

The Daytona, an unofficial nickname, had a hard act to follow. Its predecessors were the 275 GTB/4 and a myriad of 250 GTs, yet it maintained the technical lineage and run of commercial success going back to 1959 (and the 250 GT SWB). The 275-series ....[continue reading]

This unusual-for-a-Ferrari dark blue car is mostly original and has never been restored; its been driven only 20,000 miles since new. This model was officially called the 365 GTB/4, but is popularly known as the Daytona. The Daytona name came about....[continue reading]

This European-spec 365 GTB/4 first found a home in Europe, (the suffix 'A' designates its European specification), but it didn't stay there long, as it was imported to California in early 1973. Its engine, transmission, and suspension were rebuilt i....[continue reading]

This example, chassis number 15117, was built in January of 1972 to U.S. specifications. The car was ordered through Luigi Chinetti by racing driver, Dr. Harry Jones. Dr. Jones took delivery of his new Daytona in Modena on May 31st of 1972, and later....[continue reading]

After Ferrari swept the top three places at the 1967 Daytona race, the 365 GTB/4 was given its unofficial name in its honor - the Daytona. After the name leaked out during testing, Ferrari never officially applied it to the model. Twelve years later,....[continue reading]

Ferrari's storied racing heritage dates to 1929 when Enzo Ferrari founded Scuderia Ferrari, literally 'Ferrari Stable' where he built race cars and sponsored drivers, both of which he did quite well. After the war Enzo began building road cars as a r....[continue reading]

This Ferrari is the 66th of 121 Daytona Spiders constructed by the factory. The car was ordered new by James Lewis Meador, of Roanoke, Virginia, through Algar Enterprises, the official Ferrari distributor based in Rosemont, Pennsylvania, on September....[continue reading]

The Daytona was a paradigm shift in design for the Ferrari marque with more angular and aggressive lines with equally groundbreaking performance. The all-new 4.4-liter dual overhead camshaft V-12 was given six Weber carburetors and produced 352 horse....[continue reading]

The 365 GTB/4, referred to more often as the Ferrari Daytona, is a two seat grand touring car produced by Ferrari from 1968 to 1973. Introduced at the Paris Auto Salon in 1968, the 365 series replaced the 275 series and carried the Colombo V12 engine....[continue reading]

This Daytona was completed by the factory on October 13th of 1971 and delivered to Luigi Chinetti Motors of Greenwich, Connecticut, in late 1971. It is a U.S.-specification car and does not have the Plexiglas nose found on early European models, as U....[continue reading]

This Ferrari left the factory wearing Rosso Chiaro (20R-190) over Beige leather (VM 3218), and was fitted with air conditioning and a Becker radio. It was a United States production example that was completed on March 8th of 1973 and invoiced to Luig....[continue reading]

Better known as the Daytona, the 365 GTB/4 was introduced to the public at the 1968 Paris Auto Show. Ferrari only recognizes the car as the 365 GTB/4 but the media dubbed it the Daytona due to Ferrari's success at the 24 Hours of Daytona. Ferraris fi....[continue reading]

This Ferrari Daytona Berlinetta is the 721st example built. It was delivered new to a Willy Valentini of Conseza, Italy, in 1972. Originally finished in Blu Dino (106-A-72) over Nero (VM 8500) leather trim, it is now presented in Rosso Chiaro (20-R-1....[continue reading]

Ferrari built 1,383 examples of the Daytona between 1968 and 1973. This particular example was completed on October 27th of 1972 as assembly sequence no. 908. It was a U.S.-specification example with air-conditioning and finished in Argento Metallizz....[continue reading] 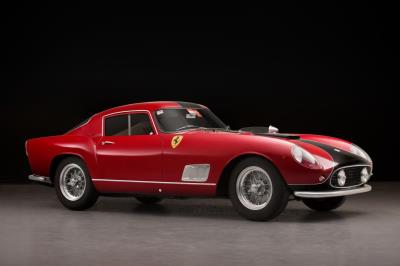