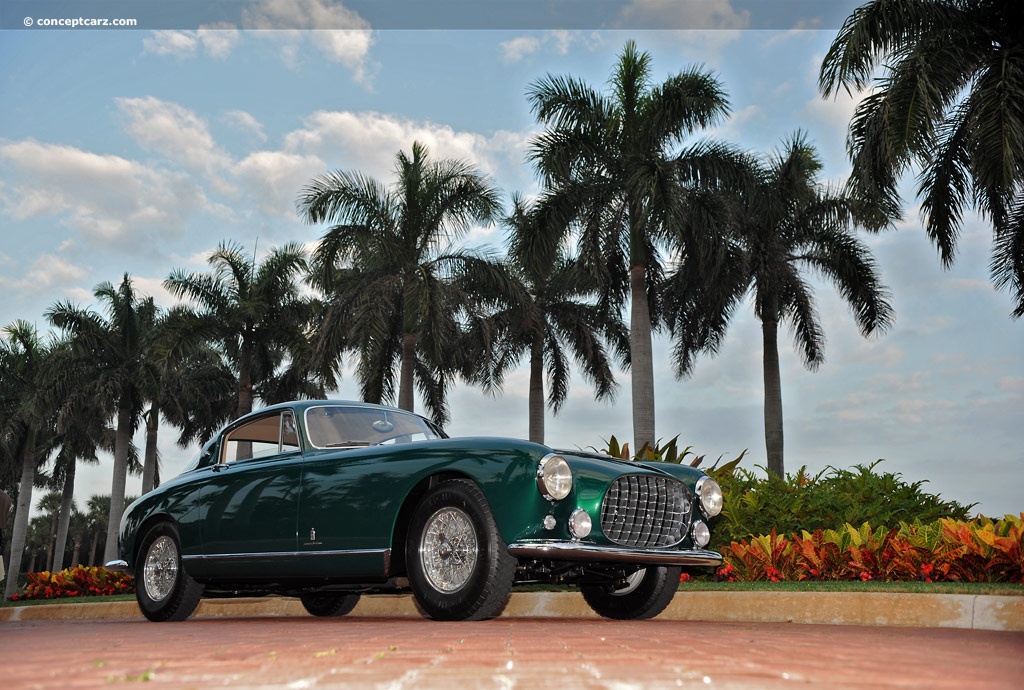 In October of 1953, Ferrari introduced the first series-built cars to carry the '250' designation at the Paris Auto Show. The first series of 21 cars was designated the 250 Europa and this car is the last of that series. It is also the last to leave the factory with Pinin Farina coachwork. In 1954, Ferrari changed the designation to the 250 Europa GT, and produced approximately 40 cars on a shortened chassis. Except for new paint applied years ago, this car is unrestored. The engine is the familiar Lampredi-designed sohc V12 and carries three Weber 36DCZ carburetors, dual fuel pumps, and has an 8 to 1 compression ratio. Power was claimed by the factory to be 200 hp at 6,300 rpm. The car has a live rear axle, Houdallic dampers and drum brakes.The 250 GT was Ferrari's first real production model. Where most of the series that had been produced in years prior were in the range of 10-20 vehicles, the 250 GT's saw production figures in the 2500 range. 104 of these were California Spiders, 350 were Lussos, and 36 were Europas.

Keeping with tradition, Enzo Ferrari only chose Italian coachbuilders to build and design the bodies of his vehicles. Pinin Farina and Vignale were the primary builders with Farina being the more popular.

Three Weber 36 DCZ3 carburetors were used. A 5-speed gearbox was used rather than the traditional four-speed. Drum breaks were used until 1959 when they were replaced with Disc brakes.
by Daniel Vaughan | Mar 2006

The 250 GT Europa was introduced alongside the 375 America at the 1953 Paris Auto Salon. This was the first road-going Ferrari identified by the 250 series nomenclature. This was also Ferrari's first true Gran Turismo. It was the only Ferrari 250 ....[continue reading]

This vehicle, chassis number 0383 GT, is one of four lightweight Berlinettas, two of which have been totally destroyed. Built on a 250 GT Europa chassis, this one has been noted in several well-known Ferrari books as the predecessor-prototype to the ....[continue reading]

This Ferrari, chassis number 0359GT, was the second of 44 series two 250 Europa GT created. Vignale was tasked with creating the elegant coachwork. It was given a wrap-around Corvette windscreen, 'fins' on the side and hood, and rode on wire wheels. ....[continue reading]

The Ferrari 250 Europa made its public debut in January of 1953. It was the first road car of the 250 series and is unique amongst other members of its family for being the only one to carry the Aurelio Lampredi-designed V-12. The engine had been use....[continue reading]