Ford Motor Company today announced a powerful new, 150PS TDI diesel engine for its popular, seven-seat people mover, the Ford Galaxy. The new addition to the line-up continues to build on the strengths and 'travel first class' character whilst providing customers with even more performance and responsiveness.
The new 150PS, 1.9-litre turbodiesel variant is available to order from February 9th, in both Zetec and Ghia models from £23,155 and £24,655 respectively. Galaxy now boasts a selection of seven engine options as well as transmission choices that include five and six-speed manuals, a four-speed automatic and five-speed select-shift automatic.

With 150PS and 310Nm of torque, the powertrain provides Galaxy with a new top speed of 124 mph and improved acceleration over its already sporty 130PS stablemate. The new top-of-the-range Galaxy TDI now accelerates from 0-62 mph in 11.9 sec. Fuel consumption rated at 44.9 mpg combined, 34.9 mpg urban, 54.3 mpg extra urban with CO 2 emissions of 170 grams per kilometre in the combined mode.

The new TDI engine is expected to boost Galaxy's appeal after a successful 2004 in which sales volumes eclipsed the Volkswagen Sharan in Western Europe. In Britain it is expected to add weight to Ford's overall diesel penetration in 2005. In 2004 27.3 per cent of customers chose diesel models, compared with 22.7 per cent the year before.

'The key difference with this more powerful engine is in real-life driving,' said Jon Gunn-Smith, large car product manager, Ford of Britain. 'Its improved acceleration is ideal for overtaking manoeuvres, and the higher top speed will make motorway driving more relaxing. We expect the new engine to fuel the vehicle's popularity among family and business users.'

Galaxy continues to offer up to four integrated child seats on the second and third seating rows for children between 11 months and 12 years of age.Source - Ford Motor Company
Ford is giving visitors to the Frankfurt Motor Show a glimpse into the future for its largest people carrier, the Ford Galaxy. An entirely new Ford Galaxy is on track for launch in the middle of 2006, and its design direction is being previewed exclusively at the Show this September. True to its function and elegant in execution, the Galaxy showcar is designed to emphasise comfort and luxury while providing spacious accommodation for up to seven people.
The new model will also blend Ford's well-renowned characteristics of supreme driving quality with high levels of interior sophistication, innovative stowage solutions and the very latest technology. A key new model for Ford of Europe

The new generation Ford Galaxy will be the first full-size people carrier developed entirely using in-house Ford of Europe expertise. Developed by Ford's European Product Development team and due to be built at Ford's Genk plant in Belgium, this vehicle will be a key product for Ford of Europe. It builds on the success of the current joint-venture model, and in particular the strengths that have made the Ford Galaxy such as success. Galaxy sits at the top of Ford's European model range, alongside the recently enhanced Ford Mondeo and soon to be joined by the production version of the Ford SAV Concept. The SAV Concept was seen at the 2005 Geneva Motor Show in March, and in June was confirmed as the basis for an additional new Ford of Europe carline, also to be launched in 2006. Designed for a specific customer

'As we look to introduce a new generation of Ford Galaxy, we have in mind a very specific customer. That is someone who may already own a Ford Galaxy and knows what they want from this type of vehicle,' said Martin Smith, Executive Design Director, Ford of Europe. 'Our goal with a new Galaxy will be to offer a true seven seat vehicle that provides the product values this core customer group desires. As you can see from this preview model, all the elements are coming into place, from the refined exterior design to an unprecedented level of interior room and functionality. We think this vehicle will excel in this highly competitive segment.'
The preview model shows how a new full-size people mover can continue to build the 'travel first class' mantle currently expressed by Ford Galaxy. Ford designers are creating a vehicle that emphasizes visually these key values of luxury, space and flexibility. Design philosophy emphasises space and luxury 'The next Galaxy, like the Ford SAV Concept, will feature elements of our evolving 'kinetic' design philosophy,' said Smith. 'They reflect style with substance, and help to express the vehicle's dynamic driving capabilities.' Full exterior surfaces spanning taut dynamic lines are distinct elements of Ford's new design language and are evident in the Frankfurt showcar. A high roofline is incorporated into this form language to provide the interior headroom and excellent all-round visibility expected by large people carrier customers. It employs Ford's overtly pronounced wheelarch lips and strong shoulders to provide a balanced side view that sets off the generous, glassy appearance of the passenger cabin. 18-inch alloy wheels help to provide a solid stance of the vehicle viewed from the side.

The front of the new Galaxy preview model has a characteristic angled nose combined with a distinctive new Ford headlamp shape, emphasizing the fresh new Ford face. The headlamp units incorporate an Advanced Front Light System (AFLS), featuring moving halogen lamps with 12 degrees of swivel that provide an enhanced view for the driver that is particularly useful when negotiating twisty country roads. It also provides directed lighting that assists with specific, low-speed cornering movements such as turning into driveways. Another notable design feature at the front of the showcar is a split front grille. Spanning the headlamps is a slim upper grille, which is balanced by a deeper lower grille to provide a refined, luxurious appearance entirely in keeping with the car's functional attributes. The generous glass area flows through to the rear of the car, where a panoramic rear screen ensures excellent all-round visibility. The rear lamps are angled and feature clear lenses to provide a jewelled effect. The wrap around rear tail lamps are sleek and elegant but still allow a practical large tailgate opening ensuring a low load height and giving customers maximum benefit from the spacious interior. Travelling first class - the new Galaxy interior

While the finer details of the new Ford Galaxy interior will remain secret until closer to launch, the emphasis will be on luxury, complementary colours and materials, and the dynamic use of surfacing.
On the preview model, Infiniti Blue leather seats feature enhanced stitch lines and blend with a Pewter interior to offer an elegant colour mix. Real wood accents add to the luxury feel. The slim instrument panel section possesses a dynamic break in colour between the dashboard and the rest of the vehicle environment, which enhances the perception of interior space. A key feature is the high H-point seating that provides the driver with a commanding driving position. There is a sweeping flow through the centre console, which features an ergonomically positioned high-mounted gear shifter. Únique Fixed Glass Roof

Another distinctive and highly useful feature on the new Galaxy preview model is a fixed glass roof and adjustable roof rack. The fixed glass roof extends to just above the backrest of the second row seat, providing passengers with an airy ambience. The showcar also integrates a roof rack into the roofline. The roof rack bars are designed to move to the rear of the vehicle to act as an aerodynamic spoiler. This has the effect of helping to keep the rear window clearer during wet driving conditions. Space and Flexibility

Útilising to the full the space for seven passengers, the new Galaxy will offer a high level of flexibility in a three-row configuration. On the Frankfurt car, a new fold flat seating system allows smart use of the space behind the driver. Though the fold flat seats provide a great deal of space flexibility, the key benefit is that the seats always remain on board to allow the configuration of the vehicle to be changed easily. Galaxy Control System

The preview model for the new Ford Galaxy introduces some important new technologies. Among them is a Human Machine Interface (HMI) system that defines the dialogue between the driver and the vehicle. This looks set to become invaluable to drivers as they will be able to increase their level of functional control via an intuitive four-spoke toggle on each side of the steering wheel that operates several vehicle functions. Through its HMI system Galaxy drivers will be able to customize vehicle settings through a single point of contact. Full technical and feature details of the production version of the new Ford Galaxy will be announced closer to launch next year.Source - Ford Motor Company 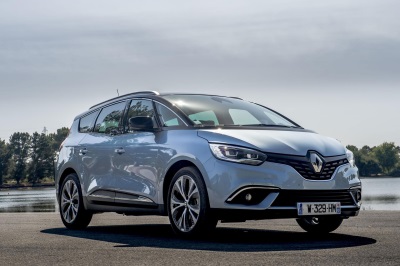