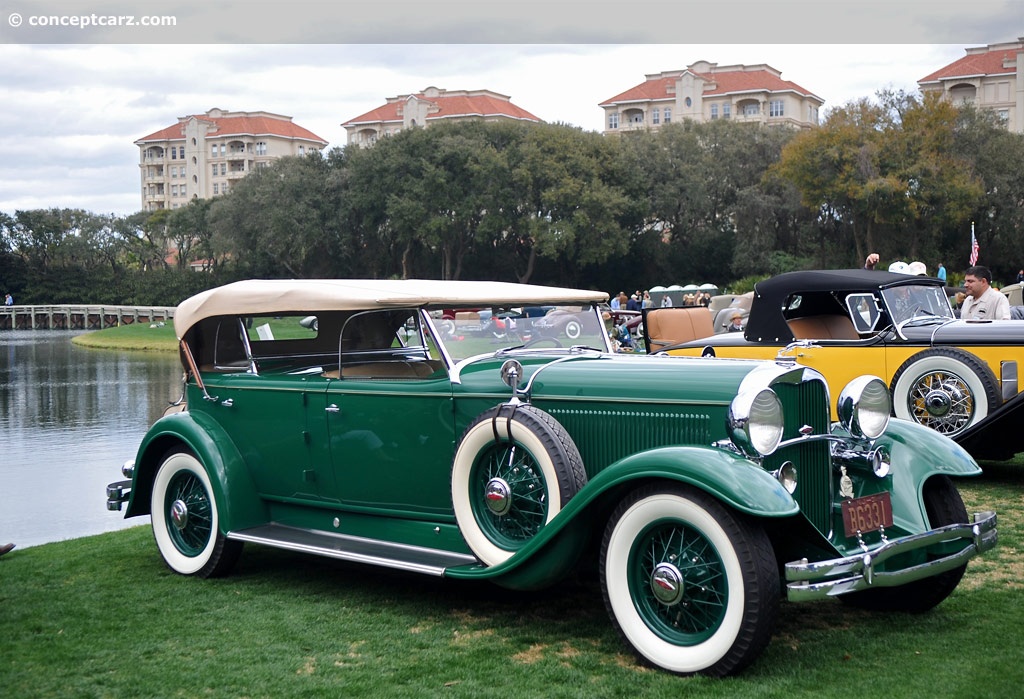 The Lincoln Motor Company was founded in 1917 by Henry Leland and his son Wilfred. Leland, who was also among the founders of Cadillac, had sold the company to General Motors in 1909, remaining as an executive until 1917 when he left following a dispute with GM President William Durant. The new Lincoln marque was financed by a $10 million government contract to built Liberty V12 aircraft engines. When the contract ended, Leland returned to automobile production with the introduction of the Model L in 1920.

Leland, a talented engineer, configured the V8 with two connecting rods sharing one bearing on the crankshaft, allowing for a shorter crankshaft and smaller overall engine size. The 357.8 CID engine initially developed 81 horsepower, increasing to 90 hp a few years later. The coachwork was designed by Angus Woodbridge, the son-in-law of Henry Leland.

The newly-formed Lincoln company struggled in the postwar recession-era with struggling sales and false tax evasion claims. The company was rescued in 1922 by Henry Ford for 8 million. Henry Ford's son Edsel was soon appointed President and Ernest C. Kanzler General Manager. New body designs followed, hydraulic shock absorbers were added, the wheelbase grew from 130- to 136-inches, and production economies were implements that reduced manufacturing costs by approximately $1,000 per car.

Despite the niche market segment, Lincoln Model L sales increased by about 45 percent, and by the close of 1923, the company had become profitable.

By the early 1930s, competition in the American luxury market was fierce, and Lincoln's response was the Model K. It continued to use the Leland-designed V8 with its fork-and-blade connecting rods but with new cylinder heads, manifolding, and a two-barrel downdraft carburetor (this was the first appearance of a downdraft two-barrel on any American automobile.) Horsepower rose dramatically, now rated at 120 horsepower, with 1/3 from the same displacement's 90bhp rating in 1930.

The company continued to offer both factory and semi-custom bodies, enlisting some of the finest coachbuilders of the era including Dietrich, Brunn, Judkins, LeBaron, and Derham. Prices for the factory coachwork ranged from $4,400 to $5,100. The custom coachwork ranged from $4,700 to over $7,000. Factory bodies included a 5- and 7-passenger sedan, coupe, limousine, a Sport Phaeton, Sport Tourer, and town sedan.

Lincoln produced 3,592 vehicles during the 1931 calendar year, a decrease from 3,515 the previous year, attributed to the Great Depression.

The Model K would be offered as an eight- and twelve-cylinder model for 1932. The following year, the Model KA and Model KB continued although both were now powered by twelve-cylinder engines. Model KA and KB designations continued through 1934, reverting back to the Model K in 1935. In 1936, Lincoln introduced the very popular Zephyr Model with an integral body frame construction and an all-steel roof. Production of the exclusive Model K continued through 1939, and for 1940, only the Zephyr and newly introduced Continental remained.
by Daniel Vaughan | Nov 2020

For 1931 Lincoln introduced a longer, 145-inch wheelbase chassis known as the Model K, replacing the 136-inch Model L chassis. The move was applauded by body designers, who had long been seeking a longer Lincoln chassis for their efforts.....[continue reading]

A sporty, expensive, and low-production car which was purchased new by Helen Clay Frick, daughter of Henry Clay Frick. The Lincoln Motor Company was founded in 1917 by Henry M Leland, who had also established Cadillac in 1902. Widely renowned for his....[continue reading]

This rare 1931 Lincoln Model K town car landaulet is fitted with semi-custom coachwork by Dietrich. It is all original including paint, top, and leather interior.

The car may be a one-off special order car that must have been commissioned th....[continue reading]

This 1931 Lincoln Model K Dual Cowl Phaeton sits atop a 145 inch wheelbase. Located in the front of the vehicle is a 385 cubic-inch side-valve engine with 120 horsepower. Power was the sent to the rear wheels through a three-speed manual gearbox with....[continue reading]

The Waterhouse Coachbuilding firm constructed a total of 40 bodies for Lincoln. They constructed seven bodies, of unknown configuration, for the Model L chassis. The remaining thirty-three were built for the Model K chassis. Twenty-five were Converti....[continue reading]

This 1931 Lincoln Model K Two-Window Berline has coachwork by Judkins. Judkins created over 3,110 examples of the Berline bodystyle between 1922 and 1939. It is believed that a mere 72 2-Window Berline's were created in 1931. ....[continue reading]

Not only was the wheelbase lengthened but the engine horsepower was increased, from 90 to 125. This was achieved mainly by adopting a new two-barrel downdraft carburetor - the first one used by an American manufacturer.....[continue reading]

1931 was a milestone year for Lincoln - the legendary model ceased production and a new, redesigned model was introduced. It was still powered by the famous Lincoln V-8 but horsepower was now 120 and the wheelbase was lengthened to 145 inches.....[continue reading]

Twenty-five different body styles were available in 1931, including this Town Sedan, which was available in two and three-window versions. The former offered a sportier, more 'European' look, although fewer were sold. With its options, this Town Se....[continue reading]

This LeBaron bodied Convertible Coupe was treated to a complete professional restoration, bringing it back to its original specifications. The car was re-painted in its correct Lincoln colors using the proper nitro-cellulose paint. At the time, its o....[continue reading]

Under the direction of Edsel Ford, the function of the Lincoln automobile was to confer prestige upon Ford. Calvin Coolidge bought a Lincoln in 1923, establishing a presidential tradition. The Model K was introduced in 1931 and 24 models were listed ....[continue reading]

This vehicle is a 1931 Lincoln Model K Judkins Two-Window Berline and one of only 72 examples built with very few survivors. It was given a $125,000 concours quality restoration 13 years ago, and has been kept in excellent condition. The 385 cubic-in....[continue reading]

1931 was a milestone year for Lincoln - the legendary model ceased production and a new, redesigned model was introduced. It was still powered by the famous Lincoln V-8 but horsepower was now 120 and the wheelbase was lengthened to 145 inches. ....[continue reading]

Only about forty-five Lincoln Ks were built, and they were considered some of the most powerful and luxurious automobiles of their day. With a 145-inch chassis, the Model K replaced the shorter Model L and provided coachbuilders, such as Willoughby, ....[continue reading]

The Lincoln Modern K was introduced in 1931 and represented a complete design transformation under the leadership of Edsel Ford. It featured a 385 cubic-inch V8 engine with a dual venturi downdraft Stromberg carburetor producing 120 horsepower. The c....[continue reading]

Lincoln's Model K was introduced in 1931, succeeding the Model L as the top-of-the-line for Ford's upscale marque. Cadillac had just introduced its new V12 model, effectively triggering a 'cylinder race.' Lincoln's V12 was in the works; meanwhile the....[continue reading]

At the end of WWI, Henry Leland began building a new line of conservative but well-designed automobiles he called Lincoln after the first president for whom he voted. After struggling financially he sold the company to Ford in 1922 for $6.5 million.....[continue reading]