Suggested vehicles
Specification comparison
Related news
The Alfa Romeo 3500 Supersport actually is four concept cars in one. The car began initially as a 6C 3000 CM race car. In all, eight 6C 3000 CM's were built and campaigned with minor success. Five time World Champion, Juan Manuel Fangio, finished second in the 1953 Mille Miglia with one and later he drove it in the 1953 LeMans endurance classic where it was classified as DNF (did not finish) in the third hour with piston failure. Of the eight 6C 3000 CM's built, two were converted to street cars, on (chassis #1026) by Boano for Argentine President Juan Peron, and another (chassis #1028) was given to Italian designer, Pini Farina.

It was natural that Pinin Farina would utilize chassis #1028 into an exciting design exercise. It's first appearance as the Superflow was at the April 1956, Turin Motor Show, and it was stunning in white with a blue stripe along the belt line. It featured mild tail fins, Plexiglas front fender caps, and a wrap around windshield with a full Plexiglas canopy and gull-wing roof panels. The second appearance was six months later at the Paris Motor Show where it appeared in red and white. The Plexilas front fenders were now metal, but the tail fins now had Plexiglas extensions.

In March of 1959, the car appeared in the Geneva Motor Show, all in white, sans the wrap around windshield, Plexiglas roof and tail fins, as the Spyder Super Sport. This was probably the most beautiful rendition of the four configurations. The car was powered by a 3.5 liter, straight six, double over head cam engine of approximately 260 horsepower. The new tail, sans fins, predicted the production Alfa Romeo Guilia Spider Duetto that would be introduced seven years later in 1966.

The final appearance of the car was in the 1960 Geneva Show as the 3500 Supersport. It is in this final configuration that the car exists today. 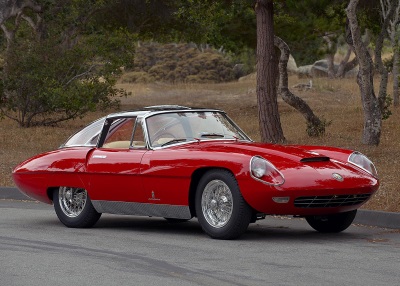