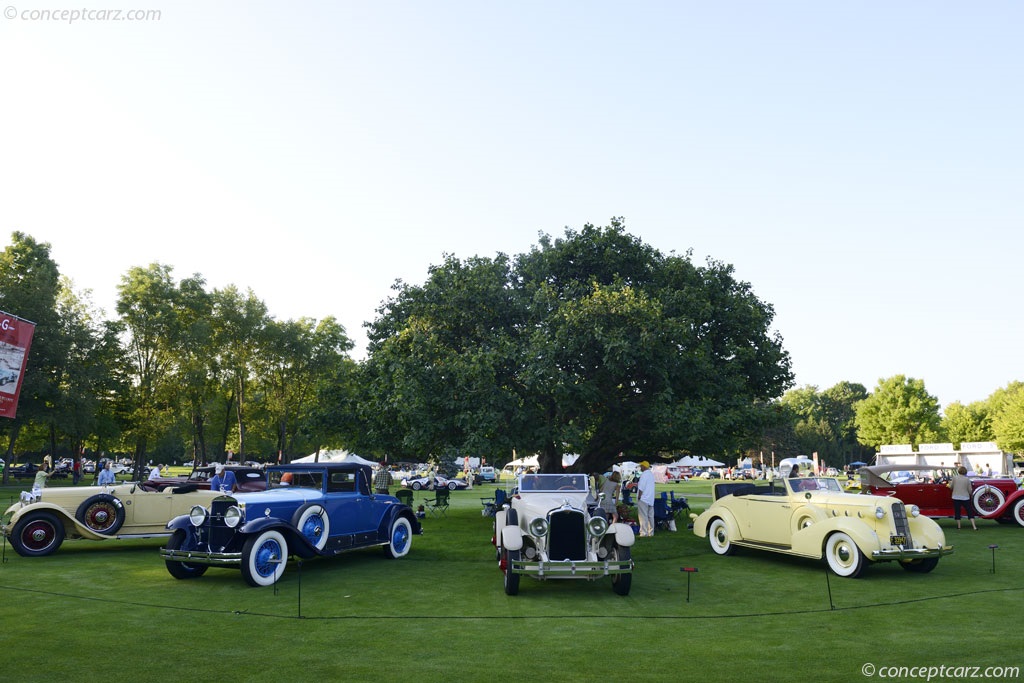 Cadillac was founded from the remnants of the Henry Ford Company in 1902. It derived its name from Antoine de la Mothe Cadillac, who founded Detroit, Michigan. It became part of General Motors in 1909. They built a reputation for aristocratic elegance, beauty, and individuality of style. As the 1920s were coming to a close, Cadillac had further expanded its reputation as America's most technically innovative manufacturer. The list includes the electric starter, electric lamps, an all-steel roof (prior cars had fabric roof sections), safety glass, first dual-plane crankshaft V8, and the first synchromesh transmission.

The 1929 Cadillacs were visually similar to the 1928 models. The most noticeable visual difference were the placement of the parking lamps, which were moved from the cowl to the tops of the fenders. Mechanical changes were more significant, with the introduction of a new 'clashless' Synchro-Mesh Silent-Shift transmission, negating the need for double-clutching. New double-acting Delco shock absorbers were added to the suspension system. The new mechanical four-wheel brakes required considerably less pedal pressure than the prior setup. Shatterproof Security Plate glass became standard in all windows. The interior received fully adjustable seats as standard.

The 341 cubic-inch L-head three-main bearing V8 engine delivered 95 horsepower and a myriad of various body designs were offered mainly from Fleetwood and Fisher. GM's Fisher Body Division offered a total of twelve different body styles to choose from, all riding on the 140 inch wheelbase. The Fleetwood Body Division had more than 30 catalog choices. Customers could, however, specify a coachbuilder of their choice.

The 1929 Cadillacs were among the first examples of the prestigious marque to feature styling developed under the direction of Harley Earl, who founded the pioneering General Motors Art & Colour design section in mid-1927.....[continue reading]

This 1929 Cadillac Model 341-B has the Fisher-built roadster body and sold new for $3,350. 1929 marked the first year for shatterproof safety glass to be installed in all Cadillac windows and windshields and was also the first year for a synchro-mes....[continue reading]

This car was delivered new to Boston, Massachusetts, in March 1929. It was sold and in early 1980, the owner started to restore the car. The current owner purchased the car in November 2007 and the next two winters were spent getting the vehicle to i....[continue reading]

The 341 Series were the first Cadillacs designed by General Motors new design chief Harley Earl, who went on to become a legendary American designer. Sales figures for 1929 were nearly double those of 1928.....[continue reading]

The exterior of the 1929 Cadillac was little changed. Parking lamps were moved from the cowl to the tops of the fenders which gave it a slightly sportier look. The mechanical components, however, received several significant changes. Most important w....[continue reading]

The 1929 Cadillac was little changed when compared to its predecessor. The parking lamps were moved from the cowl to the tops of the fenders that gave the car a slightly sportier appearance. Under the sheet metal, however, were more significant chang....[continue reading]

Few cars better represent the panache of the 'Roaring '20s' than the 1929 Series 314B Cadillac - which, ironically, appeared just as the curtain was about to fall on that storied age. The Series 314 Cadillacs were the first of the prestigious marque ....[continue reading]

This Cadillac Series 341B has a history that has been lost to the ages. According to its build tag located on the firewall, it left the factory with a Fisher bodied 4-door sedan. Somewhere during its lifespan, it was given a Victoria Convertible coac....[continue reading]

The 1929 Cadillac received minor updates including having the parking lamps relocated from the cowl to the tops of the fenders. Changes under the skin were also limited, with one of the more important modifications being a new Synchromesh Silent-Shif....[continue reading]

This 1929 Cadillac was given sport phaeton coachwork and finished in the color scheme of Madeira Maroon and Carolina Ivory with dual side-mounted spares. It was sent to Boston on November 24th of 1928, and then delivered to Portland, Maine. At some p....[continue reading]