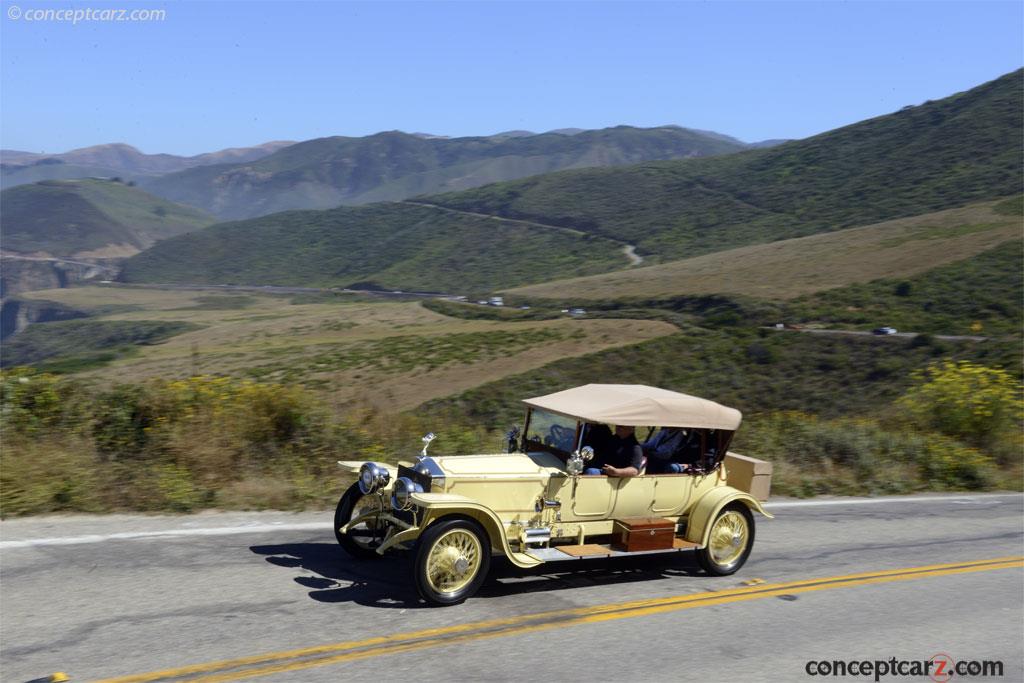 The Hon. Charles Stewart Rolls of British descent was a gentleman adventurer, racing driver, aviator, and businessman. Frederick Henry Royce was an innovator, engineer, and mechanical genius. Together they birthed a motoring legend that was built atop a reputation for unsurpassed excellence.

The Rolls-Royce 40/50 H.P. was introduced at the 1906 Olympia Motor Show, where a Pullman limousine and a polished chassis were shown. The early Rolls-Royce examples were powered by a 7,036cc, six-cylinder engine until 1909 when its displacement grew to 7,428cc and horsepower to 60 bhp. Around the same time, the overdrive four-speed gearbox was replaced by a three-speed unit with direct drive on top gear in the interests of top-gear flexibility.

The '40/50' designation was in reference to its 40 taxable horsepower and 50 true horsepower. The 13th chassis built was the first 40/50 to receive the name 'Silver Ghost,' a nickname in reference to the aluminum body by Barker with silver-plated exterior fittings and a silver-plated brass plate bearing the name 'Silver Ghost.' The Silver Ghosts would build a reputation for their incredible reliability and near-silent operation, smoothness, and absence of vibration. A 1911 sales catalog stated: 'The Rolls-Royce Car is bought by people who will have the best and nothing but the best.'

Royce's uncompromising engineering standards and attention to detail helped it achieve the accolade 'The Best Car in the World'. The engine had an aluminum crankcase, copper and brass piping, brass and aluminum castings and intricate control tubes. The chassis would only leave the Manchester (and later Derby) facility only after it had been rigorously tested. While some companies built entire vehicles, Rolls-Royce resisted building coachwork, focusing solely on the mechanical aspects and chassis.

The 13th chassis, the first to wear the 'Silver Ghost' designation, became a demonstration car for Rolls-Royce, and it was first put to the test in a 2,000-mile trial under the supervision of the Royal Automobile Club. On the road between London and Glasgow, it recorded a figure of better than 20 mpg, an impressive figure considering the large engine and size of the vehicle. The car was later entered in the Scottish Reliability trials where it had to make an unscheduled stop at 629 miles caused by a faulty petrol tap shaking shut. The car ran flawlessly day and night following the trials, resting only on Sundays until 15,000 miles had been covered; thus, 14,371 miles were traveled without an involuntary stop, setting a new world record. After this accomplishment, the car was dismantled under the supervision of the R.A.C., with all parts reported 'as new.'

In 1911, a Rolls-Royce Silver Ghost chassis number 1701 journeyed from London to Edinburgh and back. The 800-mile route traversed The Great North Road and returned down the west side of the country. The entire 'trial' was to demonstrate speed, economical petrol consumption and was to be performed entirely on the top gear. Chassis number 1701 accomplished the task with 24.32 miles per gallon. Without adjustment or alteration, the car was brought to the Brooklands track where it attained a speed of 78.26 mph. Period Rolls-Royce advertising described the feat in the following terms: 'The car.... was a standard Six-Cylinder Rolls-Royce chassis of 40/50hp. The trial... was to demonstrate that the car could travel from London to Edinburgh and back entirely on the top gear, that at the same time it could show an exceptionally economical petrol consumption, and yet attain considerable speed when required. The result...... the car traveled from London to Edinburgh and back on top gear on a petrol consumption of 24.32 miles per gallon, afterward without alteration or adjustment attaining a speed of 78.26 miles per hour on the Brooklands track.'

Chassis number 1701, the Rolls-Royce that gave the new model its 'London-to-Edinburgh' designation, was the second chassis built to the new specification with a larger torque tube to carry the propeller shaft. Additional modifications included a strengthened rear axle casings and, in the case of the first two cars in the series, inverted semi-elliptic rear springs. The engine had an upgraded compression ratio, a larger carburetor, and a lightweight and aerodynamic body created by Holmes of Derby Ltd. 1701 later achieved a 101 mph time over the flying half-mile at Brooklands with Edward W. Hives driving.

In 1913-1914, a four-speed transmission with a direct drive top was introduced.

Around 188 examples of the 'London-to-Edinburgh' cars were built with the first production models being delivered to the coachbuilders in the Spring of 1912. The last example, chassis number 2699, was built in October of 1913.

Production continued in England through 1925 and in America at Rolls-Royce's Springfield facility from 1921 to 1926. Total Silver Ghost production surpassed 7,874 examples.
by Daniel Vaughan | Mar 2020

Electrical engineer Henry Royce, dissatisfied with the car he owned in 1903, resolved to build a better one. Within two years he had done just that. It was a predecessor of his masterpiece, the 40/50 Rolls-Royce (1906) which came to be known as the....[continue reading]

Under the long and graceful bonnet of the Silver Ghost lurked a 454 cubic-inch L-head, six-cylinder, side-valve engine. It had an aluminum alloy crankcase and a timing drive, and an ignition that was driven by gears. This engineering marvel ran witho....[continue reading]

This 1913 Rolls-Royce Silver Ghost London to Edinburgh Tourer has coachwork by Cann. It was shown at the 2006 Pebble Beach Concours d'Elegance. ....[continue reading]

In 1913, this Rolls-Royce 40/50HP Silver Ghost with chassis 2517 was ordered. It was fitted with a custom six-seater Torpedo body with coachwork handled by H.J. Mulliner. The original owner was the Maharaja of Patiala, Maharaja Bhupinder Singh, who h....[continue reading]

This Silver Ghost Barker Torpedo was constructed on a London to Edinburgh chassis for R.G. Reed of St. John, Newfoundland, and a director of the Bank of Montreal in London. Barker Torpedo coachwork with a nickel finished was supplied, and the complet....[continue reading]

One of the most severe tests for motor cars before World War I was the Austrian Alpine Trails. The extremely steep grades of the mountain passes were guaranteed to take their roll on both the cars and their drivers. In the 1912 Trials, a Silver Ghost....[continue reading]

This chassis number 1NA was ordered in October of 1913 and duly sold to Rolls-Royce agents L.C. Seligman of Renfrew St. Glasgow. They were to commission respected coachbuilders Robertson of Glasgow to build coachwork for their customer, J.Neilson of ....[continue reading]

1911 was the first year that Mercedes used drive shafts instead of chain drive. The car automatically lubricates its steering and universal joints while it is being driven. The body was supplied by Maythorne & Sons, an English coachbuilder. The advan....[continue reading]

This elegant closed car has very stylish lines with a distinct sporting flair, which was unusual for Rolls-Royce. The Silver Ghost 40/50 H.P. engine was an engineering masterpiece, smooth and powerful. This Town Carriage with coachwork by H.J. Mullin....[continue reading]

The stated goal of Rolls-Royce early on was to take on and defeat all comers, in speed, endurance and in hill climbing competition. The Rolls-Royce Silver Ghost was a marvel of build-quality and sophisticated engineering, offering near silent operati....[continue reading]

This Silver Ghost Alpine model was originally equipped with a cabriolet body by A. Mulliner. The Alpine was built with a larger radiator and a four-speed transmission to facilitate Alpine driving. Years later, a Coup de Ville body by Pinin Farina was....[continue reading]

This 1913 Rolls-Royce is fitted with coachwork from Wilkinson and Sons of Derby. The car is powered by a side-valve inline six 7.4-liter engine developing 40/50 horsepower coupled to a 3-speed manual gearbox. A full set of records confirm this chassi....[continue reading]

The Rolls-Royce 40/50hp 'Silver Ghost' is a marvel of sophisticated engineering and build-quality, capable of delivering near silent operation and a luxurious experience for drivers and passengers alike.....[continue reading]

The legendary Rolls-Royce model first introduced in 1906 was not initially referred to as a Silver Ghost, rather the 40/50, denoting its 40 taxable horsepower and 50 real horsepower. The first 40/50 to bear the name Silver Ghost was actually the 13th....[continue reading] 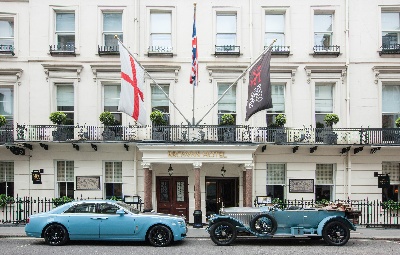 In May 1913, James Radley set off from Browns Hotel in Londons Mayfair for a famous motoring adventure – the 1913 Alpine Trial. A century later, the same Rolls-Royce Silver Ghost driven by this pioneer, aviator and adventurer has returned to Browns...