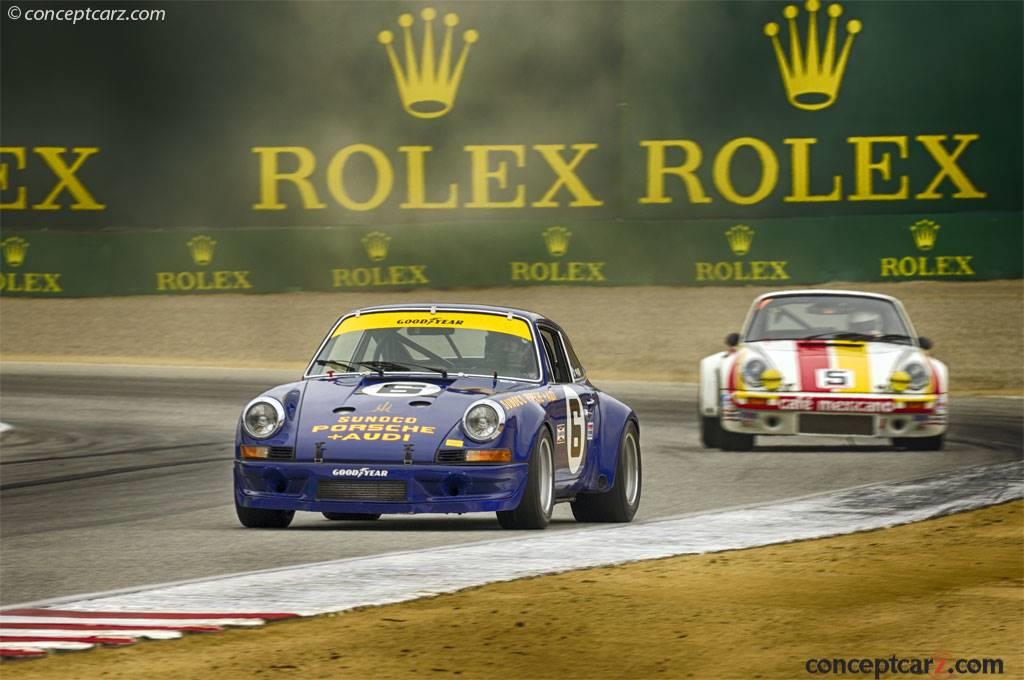 The Porsche 917 had been a dominant force in the five-liter prototype category of the World Sportscar Championship until it was abolished by the FIA in late 1972. The German automaker decided to refocus their efforts on the FIA's Group 4 GT/Special Sports Car category, using the 911 S as a starting point. To qualify the 2.8-liter racing version for competition, a minimum of 500 units needed to be built. The 1973 911 S platform was lightened and modified, and the bodywork was widened with front and rear fender flares to accommodate larger wheels and tires. Lightweights and many Touring versions were fitted with thinner-gauge body panels and glass, and the suspension was upgraded. In the back was the signature fiberglass Bürzel, or 'ducktail' engine lid spoiler, which had been proven in wind-tunnel testing to reduce rear-end lift at higher speeds. Most Touring models had steel rear body panels, and the front and rear fascia's were made of fiberglass.

The Porsche Carrera RS was introduced at the 1972 Paris Auto Show and all 500 Touring and Sport (Lightweight) cars were soon sold. Another series of 500 cars, followed by a third series, were made available and sold at substantially higher retail prices. Total production reached 1,525 examples of the RS, with 200 being the M471 Lightweights, 1,308 M472 Touring versions, and 17 RSHs (homologation models). An additional 55 examples were built as 2.8 RSR racing cars.

In early 1973, a Porsche 2.8 RSR won the 24 Hours of Daytona outpacing a field of prototypes. It would become a dominant contender in European GT competition, including victories at LeMans, Daytona, and Sebring. Lennep and Muller drove a Martini Racing RSR Carrera to victory in the 1973 Targa Florio

In comparison to the 2.7 RS, the 2.8 RSR had a central oil-cooler air intake, ultra-wide Fuchs wheels measuring 9-inches in the front and 11-inches at the rear, enclosed by large fender flares. Power was from an enlarged race engine with a 10.3:1 compression ratio, twin-plug ignition, larger valves, and lightened internal components. The Type 911/52 engine offered 300 horsepower at 8,000 RPM and was backed by a five-speed transaxle, a limited-slip differential, and an external oil cooler. The revised suspension assembly and braking system were based on the 917 components.

The modifications and final assembly were performed inside Work I, Porsche's racing shop. Every 2.8 RSR sold to customers was delivered in race-ready trim, complete with a fire suppression system, 110-liter fuel tank, battery main switch, safety harness, and roll bar. The completed package sold for DM 25,000, a substantial premium over the standard road-going 2.7 RS. Most examples were sold to private racing teams.

Among the accolades of the 2.8 RSR were victories at the 24 Hours of Daytona, 12 Hours of Sebring, Targa Florio, and six of nine rounds in the 1973 European GT Championship.
by Daniel Vaughan | Feb 2020

The Carrera RSR was the star of the 1973 sports car racing season. In total, just 49 Carrera RSR were built in 1973. Boasting 300 horsepower at 8,000 RPMs from its 2.8-liter flat six, it was another giant-killing, lightweight 911 based Porsche master....[continue reading]

The RSR for 1973 was an all-out racing weapon designed off the Carrera RS 2.7. The engine capacity was increased to 2.8 liters and most mechanical components were changed or modified for racing. The majority of the RSRs were sold to customers, but Po....[continue reading]

In early 1972 Dr. Ernst Fuhrmann, Porsche's long-time head of Engineering, took over the day-to-day operations of Porsche AG as Ferry Porsche began to dial back his work load. It was Fuhrmann's long held belief that Porsche needed to change its focus....[continue reading]

This car is a 1973 Porsche 911 Carrera RSR 2.8, the racing version of Porsche's most iconic road car, the Carrera RS 2.7. This chassis number 0705 was ordered from the factory by well-known privateer racer, Dr. David Helmick, who enjoyed significant ....[continue reading]

For the privateer in the mid-1970's who wanted to go sports car racing, and in particular compete successfully at the famed 24 Hours of Lemans, Daytona or Sebring, there was really only on viable option - the Porsche RSR introduced in 1973.....[continue reading]