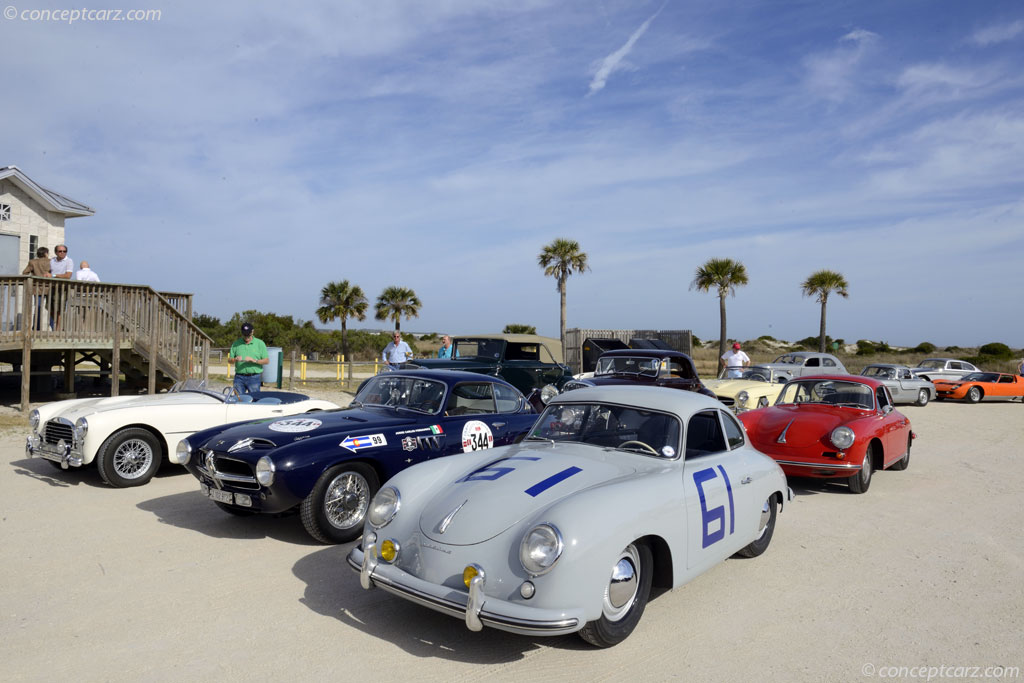 The Dr. Ing. h. c. F. Porsche GmbH company was founded in 1931 by Ferdinand Porsche, Adolf Rosenberger, and Anton Piëch with offices in the center of Stuttgart, Germany. Initially, the company did not build any cars under its own name, instead, they offered consulting and motor vehicle development work. One of their earliest tasks was to design a car for the people. The result of their work was the air-cooled, rear-engine, rear-wheel-drive Volkswagen Beetle.

Ferdinand Porsche's name would not appear on a car until 1949, and when it did, it was called the Porsche 356. The new 356 wore a groundbreaking new design, featuring aerodynamic styling by Erwin Komenda. Following a short run of aluminum-bodied cars built at Gmünd, volume production of the steel-bodied coupes began at its base in Stuttgart which it initially shared with coachbuilders Reutter. From 1955, production was moved to its original factory at Zuffenhausen.

The 356 was the work of Ferry Porsche and was based on the Volkswagen designed by his father. In a similar fashion to the 'Beetle', the 356 used a platform-type chassis with a rear-mounted, air-cooled engine and torsion bar all-independent suspension. Production of the landmark sports car would continue well in the 911 era, receiving revisions and updates along the way, with the final examples being built in 1965. During that time, the 356 was built in four distinct series, the original 'Pre-A', followed by the 356 A, 356 B, and the 356 C. The 'Pre-A' period lasted through 1955 and are readily identifiable by their split or bent windscreens. The split style was used from 1948 to 1952, and the bent with a center-crease from 1953 to 1955. A number of refinements appeared on the 1952 model-year cars from March, including the simplified and streamlined production process. Along with the one-piece, bent windscreen, the 356 received more substantial bumpers appealing to the American export market, and ventilated disc-type wheels with optional trim rings typified Porsche's export models. Fully integrated front and rear aprons extended below the rear bumpers, and the interiors were fitted with a new 6,000 RPM tachometer.

The 356 A appeared in late 1955 with a curved windshield and was the first road-going Porsche to offer the optional Carrera four-cam engine. The T5 356 B arrived in late 1959 and the redesigned T6 356 B in 1962. Among the significant changes on the final 356 C cars were a switch from drum to disc brakes.

Exterior changes remained minimal through the 356's life span, however, it underwent significant mechanical evolutions along the way. The humble 1100cc of the Gmund-era was soon replaced by later 1300 and 1500cc engines. The horizontally opposed, overhead-valve four-cylinder engine had cast-iron cylinder liners, a 1086cc displacement, four main bearings, solid valve lifters, two Solex carburetors, and delivered approximately 40 horsepower at 4,000 RPM and 50 lb-ft of torque at 2,800 RPM. The optional 1286cc unit, from 1951 forward, had aluminum cylinder liners, a 6.5:1 compression ratio, and delivered 44 horsepower and 48 horsepower. The engine grew to 1286cc in late 1953, with horsepower rising to 60 horsepower and torque rated at 63 lb-ft. In 1953, with the introduction of the 1300 S or 'Super', the 1,100 cc engine was dropped.

The optional 1488cc engine, from 1951 forward, produced around 60 horsepower and 73 lb-ft of torque. Equipped with the Hirth roller-bear crankshaft design, it was the most popular power choice until the debut of the 356A in 1956. In 'Super 1500' guise, from 1952 forward, it developed 70 horsepower and 77 lb-ft of torque. Among the improvements of this race-ready derivation, internally designated Type 528, were a new crankshaft, higher compression, and greater valve lift from an Ernst Fuhrmann-designed camshaft.

The engines were initially backed by a four-speed non-synchromesh (a synchromesh gearbox arrived in 1952) manual transmission in the rear transaxle. Stopping power was by mechanical brakes on the early Gmund cars, later replaced by hydraulic drums.

Along with coupes, cabriolets had been manufactured right from the start of 356 production, although the first open Porsche to make a significant impact was the Speedster, introduced in 1954 following the successful reception in the USA of a batch of 15 special roadsters. Cabriolet body manufacture was sub-contracted by Porsche to several different coachbuilders, Reutter undertaking the bulk of production with significant contributions from Karmann of Osnabrück, Drauz of Heilbronn, and d'Ieteren of Brussels.

Sales of the diminutive Porsche were propelled by the growing victory tally on the track, including the 20th overall finish and 1100cc class win scored by Veuillet/Mouche with the #46 'works' entry at Le Mans in 1951. The '1500S' powered Porsche's aluminum Gmund coupes at the 1952 Mille Miglia.
by Daniel Vaughan | Jan 2021

The first fifty cars were hand built with aluminum bodies hand formed over wooden 'bucks' in Gmund, Austria. The style 356 was produced between 1950-1955 and is now known as the 'Pre-A' to differentiate it from the 356 A that began production in Octo....[continue reading]

Porsche's first attempt at the 24 Hours of Le Mans grueling race was in 1951. Their entry was two of the last 11 aluminum-bodied pre-356 cars that had been built by Tatra in Vienna. The bodies were lighter and stronger than the steel shells that repl....[continue reading]

This is a very early 1953 model with Porsche's first all-synchro gearbox, which underwent a five-year nut-and-bolt restoration. It is a competition coupe with Carrera exhaust, seats, holt grilles and hood straps. A wooden stick is used to measure the....[continue reading]

During the restoration of this Porsche Pre A 356 Outlaw, every effort was made to preserve the car's racing heritage, while improving some of the mechanical and safety features to enhance the driving experience in today's vintage rallies. The origina....[continue reading]

This 1953 356 Porsche "America" Sport Roadster has vehicle number 12371. It was first ordered by Hubert Brundage, the founder of the legendary Brumos Porsche organization. Brundage raced this car extensively in the Southeast during the 19....[continue reading]

This 1953 Porsche 356 S Coupe is number 50685 wearing a Reutter body. This 'bent-window' coupe was built for the American market as : USA deLux Version. The engine is a 1500cc S model, 528 motor, producing 70 horsepower. There is a Hirth Roller Crank....[continue reading]

In March of 1952 Porsche worked in conjunction with Reutter Carosserie-Werke to simplify production of the 356. Changes included the one-piece bent windshield and more significant bumpers tailored to the American market. The 1952 cars also featured v....[continue reading]

Put up wet in 1969 and dormant for over fifty years this 1953 Bent-Window Porsche Pre A 1500 Super Coupe is all numbers matching. Number 50064 is a DNA link to the beginning of Porsche's dominance of road racing in America. Presented as it last raced....[continue reading]

This Porsche 356 Cabriolet is a USA-specification Pre-A 1500 that was factory equipped with Bosch heater, rear bench and radio. The car has been given a restoration in the original R504 Ivory exterior, with a red leather interior and a black converti....[continue reading]

The first Stuttgart-built Porsches (with bodies by the Reutter 'coachworks') were launched in 1950, prior to that they were, of course, built at Gmund in Austria. Colloquially known as the 'Pre-A' model, the succeeding model was indeed the 356A arriv....[continue reading]

The Porsche 356 1500 Super Coupe was powered by a 1,488cc Type 528 flat 4-cylidner engine fitted with twin Solex 40 PBIC carburetors and developed 70 horsepower. This particular example has a period-correct replacement engine. It was finished by the ....[continue reading]

Many European Porsche owners saw success rally racing in the 1950s. Porsche's racing version, the 350SL (Sports Leicht), soon raised the brand's profile - and sales - worldwide. A factory SL won its class in the 24 Hours of LeMans in 1951. Another sc....[continue reading]

This Pre-A 356 has been in the same family since the early 1960s. It was the current owner's father's everyday driver from Forrest Hill, Maryland, to Bethlehem Steel in Baltimore. In the early 1970s on his way home from work, a police car pulled out ....[continue reading]