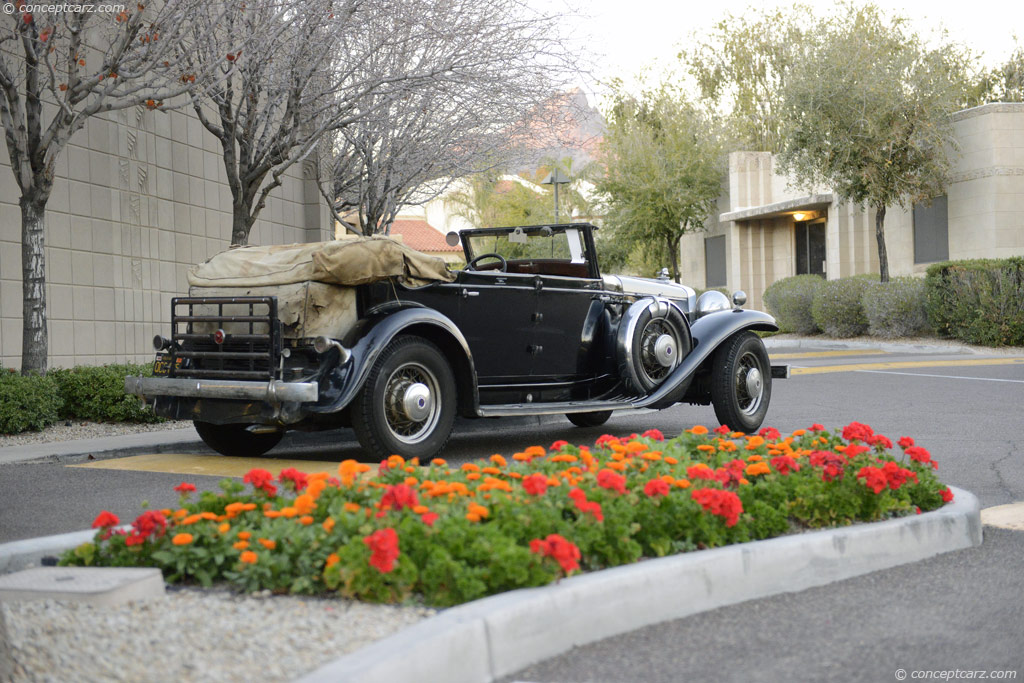 When Harry Stutz left the Stutz Motor Car Company, it came under the direction of Hungarian-born engineer Fredrick Moskovics. Under his leadership, the Stutz car was completely redesigned, with a new six-cylinder overhead cam engine, a double-drop chassis frame and worm gear rear axle. The cars rode several inches lower than their competitors, had four-wheel hydraulic brakes, had safety glass, and where somewhat boxy in shape. These new vehicles became known as the 'Safety Stutz' with the 'Vertical 8' engine.

In the mid-1920s, Stutz returned to racing with their new engine. Their first competition was the Stevens Challenge Trophy race of 1927 for closed-body production cars. The Stutz averaged 68.44 miles per hour during the 24 hour race at the Indianapolis Motor Speedway, earning the Stevens Trophy. This was an amazing accomplishment, considering its heavy, steel-body construction. Stutz soon added an aluminum-bodied, two-passenger speedster known as the Black Hawk to their model lineup. This model would win the AAA Stock Car Championship of 1927, winning every race in which it was entered.

Racing for Stutz soon ended after driver Frank Lockhart was killed at Daytona while driving a Black Hawk Special race car. Privateers, such as Charles Weymann, inventor of the Weymann fabric body construction, continued to use Stutz cars in racing, having entered one in the LeMans race. Edouard Brisson, a veteran LeMans contestant, was tasked with driving the Stutz for the Weymann racing team.

The Stutz gained the lead at the sixth hour and would hold onto the position into the night. Eventually, a Bentley passed the Stutz, leaving it in second place. Both the Bentley and the Stutz had set records for 24 hours on a closed circuit course.

In 1931, Stutz introduced a new dual valve engine. The DV-32, meaning 'Dual Valve', was the old Vertical Eight updated with twin overhead cams. Power was impressive, rated at 156 brake horsepower, it was a very efficient engine in terms of horsepower per cubic inch.

With the introduction of this new powerplant, Stutz returned to their roots and revived the Bearcat name. What had been the MA-28 Torpedo Speedster became the 'DV-28' Bearcat in mid-1931. It was given a 134.5-inch wheelbase and had seating for two. This new model was soon joined by an even faster Super Bearcat with ultra-light Weymann fabric body. This new vehicle had a wheelbase of just 116-inches with a convertible body and roll-up windows. Where the Bearcat had few creature comforts, the Super Bearcat was given all the amenities available.

For 1931, in the midst of the Great Depression, only 384 Stutz models were produced. 1932 would see production fall even further, to just 120 units. Similar production figures followed for 1933, and a mere 6 were created in 1934. The end was near, even though the company was announcing the availability of cars in 1936.
by Daniel Vaughan | Jul 2019

In 1876, Harry C. Stutz was born. He grew up on the family farm where he often helped repair their farm equipment. This led to a fascination with engines and in 1897 he built his first car soon after he began designing and creating engines. The Stutz Company, based in Indianapolis, Indiana, introduced its first production vehicle in 1911. The vehicle, after only five months of design and build, was....
Continue Reading >>

Harry Stutz built his reputation on speed. The first Bearcats, built in 1914, were the reigning champion of the American sports car scene. It was a lightweight, low slung raucous monster using a large slow revving 4-cylinder engine, producing 60 hors....[continue reading]

Between 1924 and 1930, the 'Bearcat' name had disappeared. However, in 1931 Stutz reintroduced its famed model to showcase their new eight-cylinder, dual overhead cam four-valve per cylinder, 165 horsepower 'DV32' engine. It was an all-aluminum body ....[continue reading]

Quite a lot has happened in the world since 1939, and this Stutz DV32 Sedan with LeBaron coachwork has not experienced any of it because its owner put it away in his garage in Chicago and left it there until his daughter sold it in 2012, releasing it....[continue reading]

Harry Stutz began producing cars in 1911 under the name, Ideal Motor Car Company. He entered one of his cars in the 1911 Indianapolis 500 and came in 11th. From this, the company adopted the slogan, 'the car that made good in a day.' Unfortunately, t....[continue reading]

Among the prominent pre-WWII American marques, few if any achieved the significant number of victories that Stutz did during its 24 years of existence. The model name alone continues to stir the imagination: Bearcat, Bulldog, Blackhawk Speedster, Spe....[continue reading]

Stutz Motor Company would be established in 1911 under the name of Ideal Motor Car Company in Indianapolis, Indiana. The following year Stutz would come into being. Though the company would only carry on production until 1935, the company would earn ....[continue reading]

The Stutz DV32 began as the Stutz Vertical Eight which debuted in 1926. Since the company did not have funds to design a completely new engine, they fine-tuned and upgraded their engine over the years. The DV32, which began as a 322 cubic-inch former....[continue reading]

The DV-32 chassis debuted at the 1931 New York Auto Show and became the platform for a range of stunning coachwork by LeBaron, Weymann and Fleetwood, among others. This car is one of just two LeBaron Four Passenger speedsters built in 1932. It was ex....[continue reading]

This Stutz was given the convertible coupe body, style number MB-47, on the long-wheelbase Model MB chassis. In the 1980s, it was acquired by the late Richard Sahlin of Michigan, who elected to install an original DV-32 engine and modified the body w....[continue reading]

This very rare and special DV-32 Super Bearcat was owned in the 1950s by Joe Streeter of Oklahoma. Around 1974, it was acquired by the Harrah collection. In September of 1984, it was purchased by Dr. Atwood and sent to John Sanders' Antique Auto Rest....[continue reading]

This vehicle on loan courtesy the Lemay Collection, Tacoma, WA. Stutz Motorcar Co. manufactured automobiles from 1911 to 1935. This 1932 vehicle is designated a 'Boattail Speedster' because the curvaceous tapering rear body design is reminiscent of t....[continue reading]

This chassis shows what made the Stutz DV-32 magnificent. In addition to engine advancements, the DV-32 offered power-assisted braking, a Bijur automatic chassis lubrication system, the low profile worm drive rear end assembly, and a host of other cu....[continue reading]

This Stutz, built long after most manufacturers had gone to the convertible coupe style in lieu of the open roadster, found its way into the ownership of a gentleman named A.K. Miller, who came from some means and was Ivy League educated, yet lived a....[continue reading]

This LeBaron-bodied Convertible Sedan was originally owned by Chicago-based Arthur Powers until the late 1940s, when it was sold to an individual living in Phoenix, Arizona. It later made its way to Odessa, Texas, where it was spotted a decade later ....[continue reading]

This is one of the few limited production Super Bearcats built by the Stutz Motor Car Co. of America in Indianapolis, IN. It is basically a factory hot-rod of sorts, mating the powerful DV-32 dual overhead cam straight-eight engine with an extra shor....[continue reading]