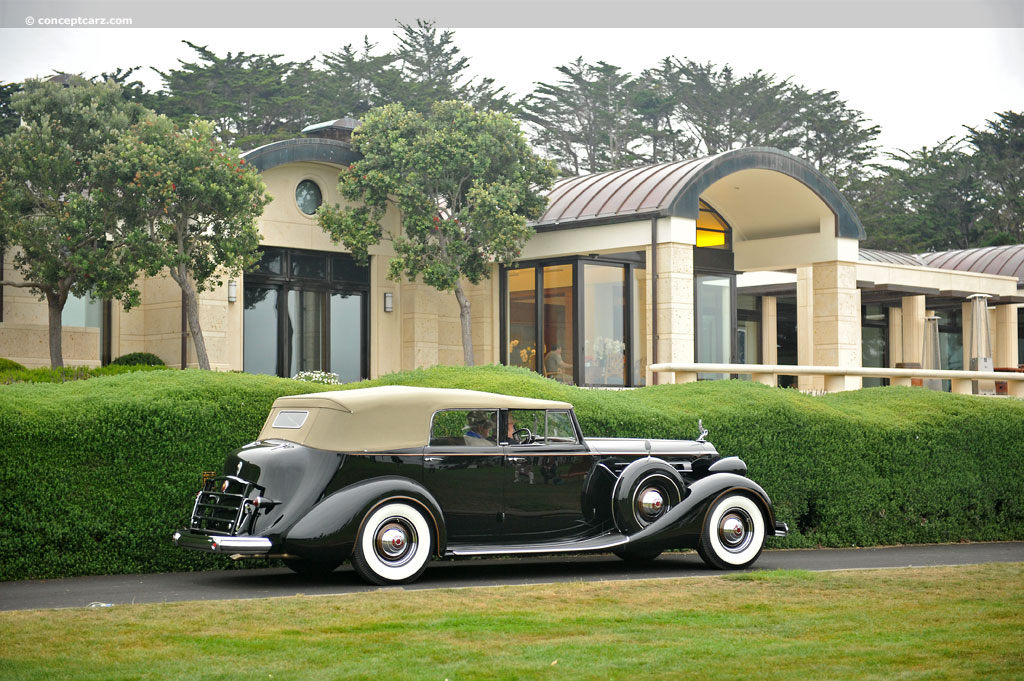 Packard built their first automobile in 1899, and the company began its existence as the Ohio Automobile Company of Warren, Ohio, before becoming the Packard Motor Car Company in 1902 and moving to Detroit a year later. With the cylinder wars in fully swing by the 1930s, Packard responded with their new V12 in 1932. It displaced 473.3 cubic-inches and offered 175 horsepower with a Stromberg dual downdraft carburetor and a three-speed transmission with vacuum assisted clutch. Packard advertised it as having a top speed of 85 mph, however it was reportedly over 100 mph.

New streamlined bodies were introduced in 1935.

Over 1,300 examples of the Fifteenth Series Twelve Packard's were built in 1937, a dramatic increase over the 682 for the Fourteenth Series. Total Packard production for 1937 topped 87,000 units. The 1936 models were virtually unchanged, however the 15th Series had brought a comprehensive series of mechanical improvements. The 1937 Packard was truly a luxury automobile with smooth, quiet, and powerful operation. 1937 was the first year for hydraulically assisted brakes and independent coil spring suspension.

Packard's largest and most expensive offering in 1937 was the Model 1508 resting on an imposing 144-inch wheelbase. This would be the final year for the Senior 144-inch wheelbase Twelve, which also benefited from the return to disc-type steel wheels and the elimination of the aged Bijur central-chassis lubrication system.
by Daniel Vaughan | Dec 2019

The Packard V12, initially called the 'Twin Six', was the flagship of the line. The design of the engines were quite different from the prior 'Twin Six' models, so the name was updated to 'Twelve' from 1933 onwards. There was a plethora of bodystyl....[continue reading]

The car was first sold and was garaged in N.Y. City from 1937 until 1939. It was then sold and used primarily as a parade vehicle in N.Y. It was during that period of time it was fitted with a rear seat heater.....[continue reading]

This 1937 Packard V12 Convertible Sedan has coachwork by Dietrich and rides on a wheelbase that measures 144-inches. It was sold new in Boston and spent much of its life in Rhode Island and Arizona. The car was purchased in 2003 by its current owne....[continue reading]

This 1937 Packard twelve Flower Car is the companion to the nearby 1937 Packard 'Art Carved' Hearse, this Packard was original built in Detroit as a Fifteenth Series, Super 8 before being customized into a flower car.....[continue reading]

Packard was a leading luxury marque at the start of the Classic era and was also one of the oldest car companies in America. The first Packard had been built in 1899. The company began life as the Ohio Automobile Company of Warren, Ohio before becomi....[continue reading]

Packard's 'Twin Six' was launched in 1932 and was the company's flagship status and became an instant legend. The following year, the model was renamed as the 'Packard Twelve', and was offered in a myriad of body styles, including standard production....[continue reading]

For 1935, Packard received new, more streamlined bodies in 1935. The Twelve Series gained aluminum heads and a quarter-inch of stroke. For 1937, hydraulic brakes and coil spring independent suspension were extended from the less expensive series to t....[continue reading]

New for 1937 on the Packard Twelve were hydraulic brakes and an independent front suspension system. This gave the proven performance of the now 473 cubic-inch V-12 greater driving ease and helped lead Packard to record sales of 12-cylinder cars with....[continue reading]

This Packard 1508 Convertible Sedan was acquired by its present long-time enthusiast owner from the estate of the car's second owner. It is believed that he purchased it in 1961, but was never able to embark on a comprehensive restoration. The new ow....[continue reading]

This Convertible Sedan was Packard's largest and most expensive production-bodied offering in 1937 and brought a comprehensive series of mechanical improvements. Most notably, the introduction of 'Safe-T-Flex' independent suspension on 'Senior' Packa....[continue reading]

Having led the luxury car market throughout the first three decades of auto production, Packard was reaching its peak by the late 1930's. Having survived the Great Depression building some less expensive and ostentatious automobiles alongside traditi....[continue reading]

Built in Detroit from 1899 until 1958, Packard was long considered to be the premier luxury automobile. Along with Peerless and Pierce-Arrow, Packard was often referred to as one of the 'Three P's' of American motor car Royalty. During the 1930s, whe....[continue reading]

The Packard 1508 Twelve Convertible Sedan was the company's largest and most expensive production-bodied offering of 1937. This particular example is believed to have been delivered by the Packard Westchester Company of White Plains, New York. It was....[continue reading]