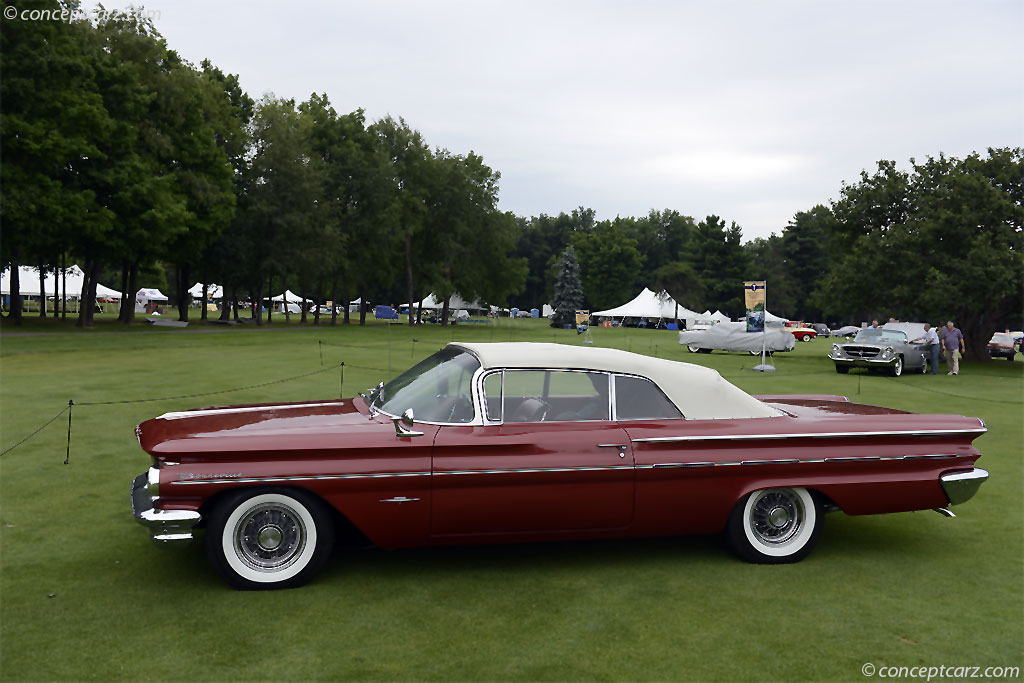 To celebrate General Motors' 50th Anniversary 'Golden Jubilee', all stops were pulled out by the designers on the 1958 Pontiac Bonneville Sport Coupe, undoubtedly one of the flashiest of all 1950's vehicles. A one-year-only body was featured as a final statement by longtime GM styling chief Harley Earl before his retirement. The entire 1958 lineup literally sparkled chrome. Unique two-tone exterior color combo's and deluxe interiors were showcased on interiors on all 58 models from Chevrolet's, Pontiacs, Buick, Oldsmobile, and Cadillacs. Their motto for this year was 'The Boldest Advance in Fifty Years!'

Semon E. 'Bunkie' Knudsen became Pontiac's new general manager in the summer of 1956 and soon after he hired Pete Estes and John DeLorean. Huge changes were in the works for Pontiac. First introduced as mainly a dealer promotion vehicle, that attempted to highlight Pontiac's new high-performance image, the original Bonneville was a largely flashy convertible with a highly powered V8 engine generating 310 horsepower.

Originally introduced as a limited production performance convertible in the Pontiac Star Chief model range during the 1957 model year, the Bonneville eventually became its own series in 1958. Historically based on the Cadillac DeVille, the Bonneville was built by the Pontiac division of General Motors from 1958 until 2005. Pontiac has been best known for its performance vehicles, especially since the introduction of the Bonneville I 1957. Perhaps a little flashier and faster than a Chevrolet, it is still cheaper than an equivalent Oldsmobile or Buick. That has remained Pontiac's mission.

First appearing in 1954 on a pair of bubble-topped GM Motorama concept vehicles called the Bonneville Special, the Bonneville name first entered the lineup as the Star Chief Custom Bonneville, which was a high-performance, fuel-injected luxury convertible late during the 57 model year. The very first Bonneville was a spectacular, chrome-laden convertible with a continental-style spare wheel mounting, fuel-injected engine. It came with an eight-power front seat, under-seat heater, defroster electric antenna, and many more unique and exclusive features.

During that first year, only a total of 630 units were produced. This small amount made it the most collectible Pontiac of all time, especially since it cost twice the amount of the star Chief convertible. The Bonneville has persisted and remained as the division's top of the line model until 2005. Many speed records were being set at the Utah salt flats, and the name was created from the town of Bonneville, the place of much auto racing, and most of the world's land speed record runs.

The public must have liked both the car and its name became in 1958, a coupe was added into the lineup as Bonneville expanded into its own series. This year it paced the Indianapolis 500. Offering 225 hp an 285 hp V8 engines, the Bonneville sat atop the Pontiac range, also offering a deluxe steering wheel, unique upholstery, and chrome wheel covers. The Bonneville also featured wraparound windshields and rear window, two-toning on the roof, and long striking side spear plus chrome hash marks placed on the front fenders.

During its third year, the 1959 Bonneville gained a 4-door body style along with a nearly complete line in itself. The Pontiac Wide-Track was born in 1959 when all Pontiac makes and models received new chassis with 'wide-track' stance. During this year, the introduction of two of Pontiac's greatest marketing inspirations was showcased, the split grille, and the Wide Track slogan, both are still part of Pontiac's image to this day.

Sales peaked in 1966 at 135,401 units sold. In 1969, the main highlight became the new V8 engine that provided 360 horsepower. Considered Pontiac's most expensive and most luxurious model throughout the 1960s, the Bonneville was extremely instrumental in moving Pontiac to third place in sales from 1962 until 1970. Bonneville's constantly received updates, changes, and restyling, along with new features for all of its trim models throughout the 1970's.

During the early 1970's, the Grand Ville name was being used for Pontiac's highest-price model, and though the Bonneville was de-emphasized slightly, it never went away. In 1976, the Bonneville emerged in the top spot. This was the final year before the down-sized full-sized Pontiacs began to appear in 1977.

The Bonneville nameplate was quite abruptly moved from a full-size vehicle to the mid-sized car in 1982. The mid-sized car was previously known as the Pontiac LeMans. This change was not taken to very well by customers, so Pontiac was forced to reintroduce a full-sized vehicle. They brought over the Canadian-built Pontiac Parisienne, which was basically a restyled Chevy Caprile that was powered by a Chevrolet V6 or V8 engine. Once again, Bonneville was placed one notch below the top of the line.

Just like the previous time, downsizing became the salvation that the Bonneville needed. The Parisienne was discontinued in 1987, and the Bonneville was redesigned completely as a front-wheel-drive vehicle and once again rejoined in pre-1982 platform buddies, the Buick LeSabre and the Oldsmobile Eighty-Eight. It again regained its status as the senior Pontiac and the SE Bonneville was placed on Car and Driver magazine's Ten Best list for that year.

The decision was made by Pontiac to change the Bonneville from rear-wheel drive with a V8 engine to a more economical front-wheel drive 3.8 V6 vehicle in 1987. The V6 that was installed was a 3.8L V6 with the RPO code of LG3. A dive in the performance market soon followed, as this engine only produced around 150 hp, though it had a kick of 210 ft-lbs of torque power.

The following model that was introduced in 1989, the Bonneville LE may have been Pontiac's attempt to add a bit more of pep and pizazz to the Bonneville line. This new model moved up to 15 hp and 10 ft-lbs of torque, and this engine has the RPO code of LN3. The Bonneville was once again redesigned in 1991, though it did remain as an H-body.

A total redesign was done in 1992 to the exterior of the Bonneville, though the interior experienced very few changes. The LE trim was also taken off the lineup. Available trims for 1992 were SE, SSE, and SSEi, and airbags now came as standard features in Bonnevilles. Nearly 100,000 Bonneville models were sold in 1992.

Things once again changed in 1993, though the exterior remained the same, the interior did go through a slight update. A sport Luxury Edition was made available for '93, which was basically a base SE, with an SSE exterior, an all of the same available options as an SE. Much remained unchanged for the 1994 model. Much of the vehicle has remained the same throughout the next few years, making way for a total redesign for the 2002 model year.

The Bonneville regained a V8 option on the GXP trim for 2004, which has been a first since 1986. On February 8, 2005, GM announced that the Bonneville would be dropped from Pontiac's lineup for 2006. The high-end Pontiac Grand Prix GXP trim replaced the Bonneville.

For many years, the vehicle fondly called the 'Bonne', the Pontiac Bonneville has showcased a mix of luxury, performance with the aid of a supercharged 3.8-liter engine.By Jessica Donaldson

Pontiac introduced its flagship Bonneville in 1957. It continued for many years as the largest and most prestigious model.....[continue reading]

This 1960 Pontiac Bonneville Sport Coupe was found, still with its original owner, in a Pennsylvania barn. Following an extensive N.O.S. parts search, the car was restored to its current condition. The interior, which is 100% original to the car, f....[continue reading]

The Bonneville was Pontiac's top of the line convertible model for 1960. Pontiac's advertising theme expounded upon this cars wide-track design (width between the left and right side tires) providing improved ride comfort and enhanced cornering and ....[continue reading]

The year 1960 marked Pontiac's second year of 'Wide-Track' design. Pushing the wheels further over in the fenders and creating what were considered to be the best cornering full sized cars available. The Bonneville was the flagship and it was the qui....[continue reading]

Pontiac's heritage dates to 1899 when the Pontiac Spring and Wagon Works, makers of fine carriages, was founded. Seeing the potential of the nascent automobile industry, the owners formed the Oakland Motor Car Company, eventually selling out to Gener....[continue reading] 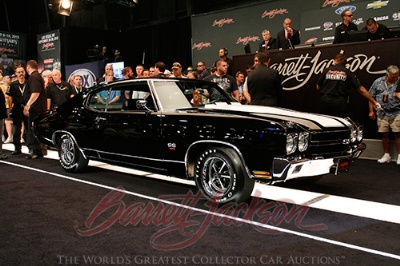 ROUSH YATES AND RICHARDS BEGIN SPEEDWEEKS WITH A WIN

Mooresville, NC (February 11, 2013) 2013 Speedweeks is just around the corner and Roush Yates Engines are starting the season off strong with Josh Richards capturing his first win of the year this...