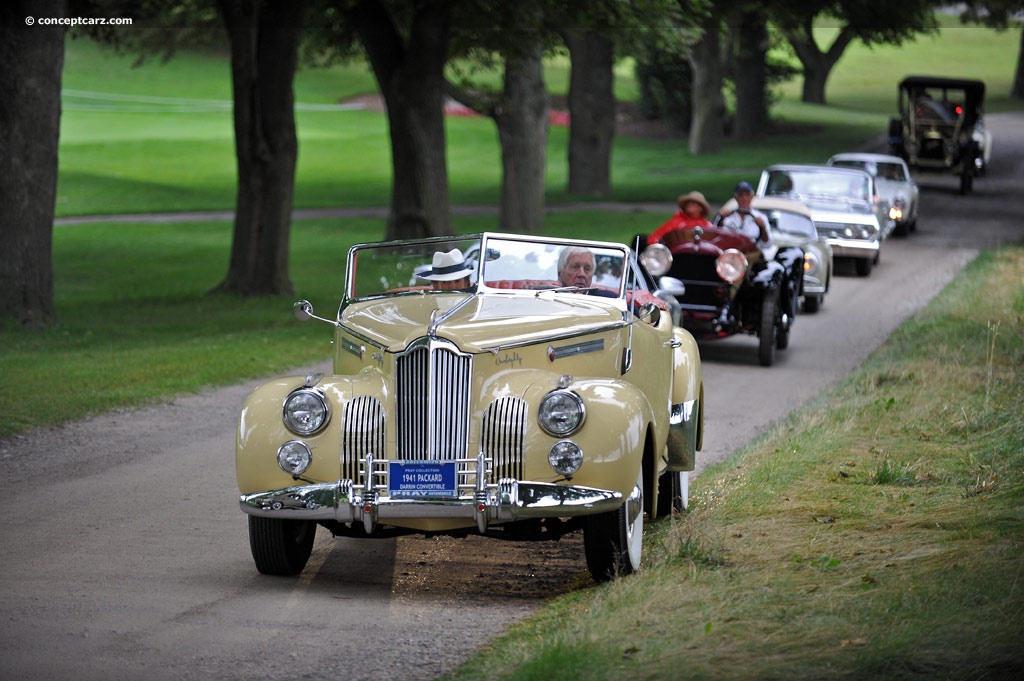 The last year of production for the Packard Twelve was in 1939, and was replaced by the 180 as the company's top-of-the-line automobile. The Model 180 were built to nearly identical specifications to the 160, with trim and interior appointments distinguishing the two. The Super-8, One-Eighty models had a revised front end, and headlights integrated into the fenders for the first time. The interior had a dash fascia that was modeled almost entirely in plastic.

Packard advertised the 180 as a custom car built to order. Eleven body styles were offered with six of those being provided by intendent coachbuilders. The 180 was comprised of the 1906, 1907, and 1908, distinguished by the size of the wheelbase and available in various bodystyles. The 1906 was a convertible victoria with coachwork by Darrin. Five bodystyles were available on the 1907 and five on the 1908.

The Darrin bodied cars had proven popular, and Packard recognized an opportunity to market the cars outside of California. So they acquired the rights to the design and put it into limited production themselves. In the former Auburn-Cord body facilities at Connersville, Indiana, an assembly line was established to hand the production. Production was later transferred to the Sayers & Scovill's facility near Cincinnati, Ohio. In comparison to the construction of the cars by Darrin of Hollywood, the Packard-built cars of Darrin design were much improved upon. Sold as the Convertible Victoria by Darrin, they were built in small and exclusive numbers through the end of pre-war Packard production in 1942.

New York's Rollston built a small run of 'semi-custom' bodies for Packard and offered two 'catalogue custom' bodies on the Packard Custom Super Eight One Eighty chassis in 1941. Both styles were intended to be driven by chauffeur, and were outfitted with open driver's compartments and padded formal roof lines. The most expensive and deluxe was the All-Weather Town Car, which was based on the 148-inch wheelbase 1908 platform. They were built by extensively modifying a factory touring limousine body and were priced at $4,820 each. Production was limited, with only three of these cars produced in 1941.

By 1941, LeBaron had become a division of Briggs, yet still continued the tradition of building largely hand-built bodies in limited numbers. The majority of LeBaron's final Packard offerings were formal limousines, which were intended to be driven by a chauffeur. In 1941, however, an 'owner-driver' version was offered called the Sport Brougham. Resting on the shorter 1907 Series chassis, it had narrow chromed window frames and a 'formal' rear window. In total, 99 examples of the Sport Brougham were built.

Packard produced approximately 930 examples of the Senior Packards in 1941, and approximately 50 such examples were the LeBaron Touring Limousine. The semi-custom was built on Packard's longest wheelbase of 1941 and, at $5,595, was the most expensive....[continue reading]

In 1941 Packard offered a small line of custom bodies carrying the LeBaron nameplate, of which this Sport Sedan is one. By this point LeBaron was a part of the Briggs Body Co. and these were created in the custom section of Briggs. As a cost-cutting ....[continue reading]

In 1941, the LeBaron Company was commissioned to build about 100 custom bodies for Packard. Standard on the Packard 180 series were power windows, overdrive and deluxe interior appointments. The 180 series vehicles were powered by a 356 cubic-inch st....[continue reading]

LeBaron made just 99 examples of the Sport Brougham that made its debut in 1941 on the 138-inch wheelbase. These were essentially a replacement for the outgoing Club Sedan. This particular example is only the second example produced of this custom-bu....[continue reading]

Often it is the provenance of a full classic automobile that really makes it stand apart. This full classic 1941 Packard 1907 Convertible Limousine with body by Rollson is a true one-off custom. It is believed to be the very last custom convertible b....[continue reading]

This car was purchased new by Mrs. Elizabeth G. Packard on May 3, 1941 at Hause Garage located in Jamestown, New York. Mrs. Packard requested body and interior custom alterations that would have added to this base price. It was primarily used in Lake....[continue reading]

This 1941 Packard All Weather (AW) Cabriolet is the only example of this motor car known to exist. The exact number produced is unknown.....[continue reading]

This Bohman & Schwartz Convertible Victoria is a stunning design that is somewhat reminiscent of the Packard Darrin Victoria, yet it is distinctive in many ways. The V-windshield has a strikingly severe rake to it, while the trailing edge of the fro....[continue reading]

This 1941 Packard Darrin was custom built by Howard 'Dutch' Darrin by modifying Packard Convertibles. Darrin lowered doorlines and windshields and extended the hood. It has rear opening doors, rather than suicide doors common on the 1939-1940 models ....[continue reading]

This Packard Darrin Convertible Victoria was delivered on January 27th of 1951 through the Meador Motor Company in Houston, Texas. It was purchased by Harry Rinker in the late 1960s from collector Tom Lester. A professional restoration was completed ....[continue reading]

This Darrin-designed convertible is one of just 35 built in 1941 at a retail price of $4,595. This last iteration of Darrin's famed cut-down door style is felt by many to be the most successful because the body stability issues of earlier types were ....[continue reading]

In the early 1940s, the custom coach-building industry began to fade out of existence. American luxury automakers slowly discontinued the factory-catalogued 'semi-customs' that had been a part of their lines for over a decade. Packard was among the l....[continue reading]

In 1941, Rollson offered two 'catalogue custom' bodies on the Packard Custom Super Eight One Eighty chassis. Both were designed to be driven by a chauffeur, and were outfitted with open driver's compartment and padded formal roof lines. The All-Weath....[continue reading]

This Packard Model 1908 One-Eighty rests on a large 148-inch wheelbase and can accommodate up to seven occupants. It is equipped with a pair of folding jump seats and an open passenger compartment, meaning there is no division window to separate the ....[continue reading]

This car was owned by Lucy Aldrich, sister of John D. Rockefeller, Jr.'s wife Abby. This formal sedan was chauffeur driven to and from the theater, formal events and shopping. There is lots of leg room in the rear, but little in the front. It has a d....[continue reading]

This car has 45,000 original miles and was originally owned by Greta Garbo. It is one of 99 custom bodied Sport Broughams built with the body be LeBaron. The car was part of the Bill Harrah Collection in Reno, Nevada from 1971 to 1986. It has an eigh....[continue reading]

Just 99 examples of the Sport Broughams were built and 20 are known to survive. The earliest-known owner of this particular example was George Oxford of Iowa. In the late 1960s, Mr. Oxford sold it to Don Hanson, who owned it until 2001, when it was s....[continue reading]

1939 was the final year of the twelve cylinder Packard. For 1940, the straight eight was Packard's top power plant and it rivaled the twelve in terms of horsepower, yet it was lighter and a much simpler engine to maintain and build. The top Packard m....[continue reading]

This car was one of two Darrins used for the filming of Banacek. This was the main filming car and appeared with George Peppard in most of the series. ....[continue reading]

The LeBaron Sport Brougham body style #1452 was new to the Packard lineup for 1941. Part of the Custom Eight Series, it was in a sense, a replacement for the former club sedan, which was discontinued for 1941. Built only on the Custom Eight 138-inch ....[continue reading]

This 1941 Packard One-Eighty Custom Formal Sedan wears coachwork by Rollson Inc. of New York, and was ordered new for Alta Prentice. Its custom coachwork in the 1432 body style was the only one ordered for 1941 and it wears the 2001 series number, th....[continue reading]