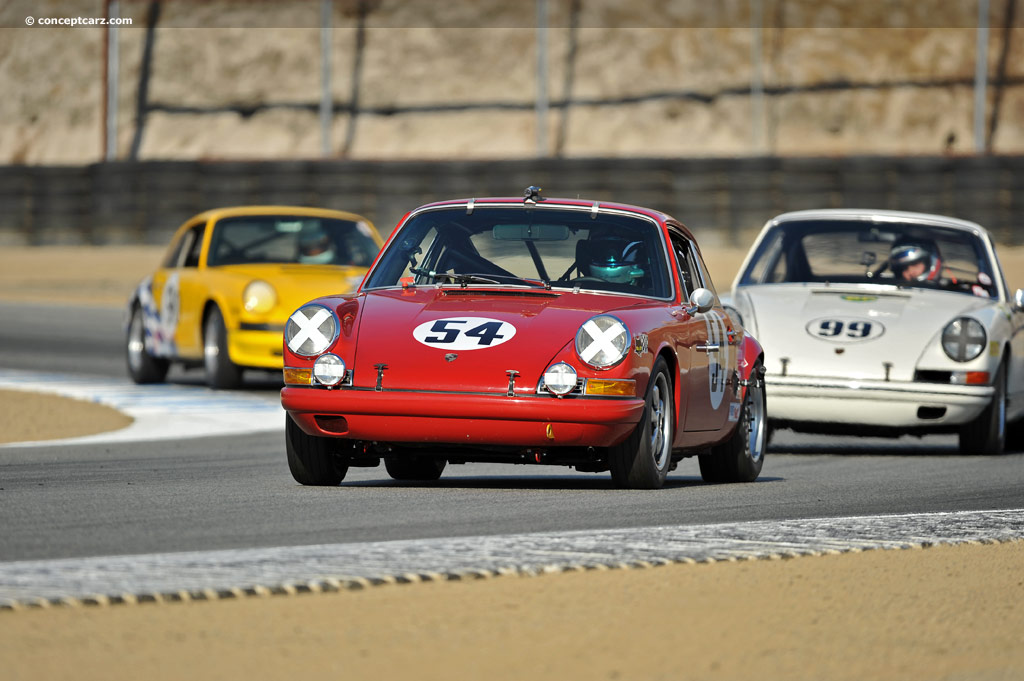 For 1967, a new 911S (Super) high-performance coupe was introduced. While the base model had a 9.0:1 compression ratio, the 911S version had a compression ratio of 9.8:1, larger valves, forged light-alloy pistons on forged and nitride connecting rods, a revised exhaust system, and a pair of 40 mm Weber triple-throat downdraft carburetors. The 2.0-liter flat six offered 180 horsepower, an increase of 32 HP over the base model. 4.5 x 15-inch Fuchs lightweight forged alloy wheels were standard on the 911 S, along with Koni shock absorbers, a new rear anti-roll bar, a larger-diameter front anti-roll bar, and ventilated disc brakes. Even with the additional and distinctive trim to the body, the engineers were able to reduce its weight.

Recently, the 'A-Series' 911s have become more desirable of their shorter wheelbase, as it was extended in August of 1968. The flat-six is only 2.0-liters, but highly tuned with overhead cams and two triple-choke carburetors. The 'S' was the best performing variant of the original short wheelbase cars and is easily distinguished by its Fuchs five-spoke alloy wheels.
by Daniel Vaughan | Feb 2020

In 1967 Porsche created the 'Sports Purpose Program.' The idea was to make available to private Porsche customers specially prepared cars and parts for racing the fledgling 911. These cars were used in Europe for rallying and in the United States for....[continue reading]

This 1967 Porsche 911 is one of just a handful of special-purpose cars that were factory built for the U.S. Trans American Race Series. It was delivered with all of the then necessary equipment for racing, including a roll bar, 100 liter fuel tank, L....[continue reading]

This Porsche was raced in Trans-Am, FIA and pretty much everything else in the 1960s and 1970s by Herbert E. (Bert) Everett. This was one of three totally purpose built race cars built by Porsche to do battle in the Trans-Am series in the United Stat....[continue reading]

In May of 2012, the original owner for 45 years, Mr. John R. Styles, sold this 1967 Porsche 911S to the current owners. While the car has covered over 90,000 miles, it has never been restored. The car retains its original engine and transmission. The....[continue reading]

This 911 T/A P.A.R.T. factory race car was special ordered by racer Jim Netterstrom through Joe Heishman's Porsche. It is believed this special race car is one of only three built by the factory with full Trans Am racing options. Jim raced this 911 f....[continue reading]

In September of 1965, Porsche introduced a new Targa roof model at the Frankfurt Auto Show. In commemoration of Porsche's successive wins at the Sicilian road race, the new model was called the Targa. The following year, a production version became a....[continue reading]

1967 was the first year of the 911 Targa and Targa S complete with 'soft rear window' T-Top. This car's VIN confirms that it was the 172nd Targa built (Porsche says they made 483 S model Targa and 718 of the standard Targa that year) and to 'S' speci....[continue reading]

This soft-rear-window Targa was originally owned by Chick Iverson, the first and for a long time, only official Porsche dealer in Newport Beach, California. Iverson, who ordered the car in Special Order Silver Metallic with a Webasto gas heater, owne....[continue reading]

This 1967 Porsche 911S Targa is fully restored to a concours level. The 1967 model year represents the first appearance of three iconic 911 features: the Targa style, the more powerful S engine, and Fuchs alloy wheels. Additionally, it has the rare o....[continue reading]

According to the Porsche factory, this car was ordered for racing by Jack Ryan, owner of RBM Motors, a Mercedes-Benz dealership in Griffin, Georgia. Ryan had previous success with Porsche, racing a RSK and a 904GTS then moving to the 911 model for 19....[continue reading]

Team Ready to Shine in Six Hour Race June 27, 2014 (WATKINS GLEN, New York) – At this stage last year, Mazda had scored three of their nine wins with the SKYACTIV-D Mazda6 in the Grand-Am...