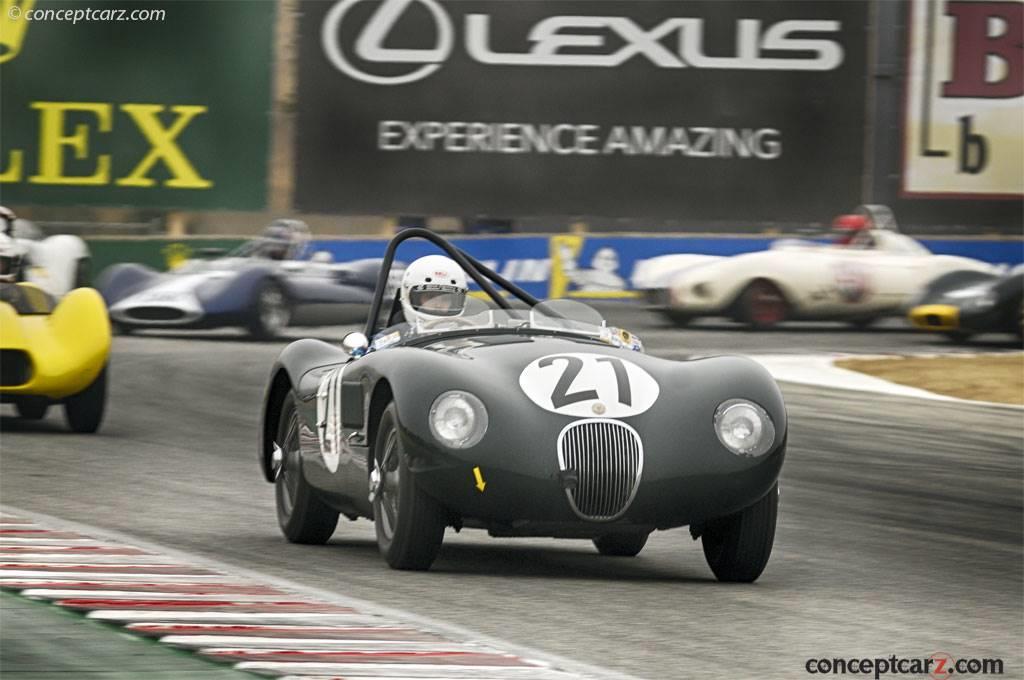 William Lyons founded the Swallow Coach Building Company to provide attractive aftermarket bodies for the 1920s Austin Motor Car. During the early 1930s, his own 'SS' cars used various chassis, transmissions, and engines with aesthetically appealing bodies. By 1936 the name of Jaguar was conceived and with it the SS Jaguar range. During World War II, the company produced parts for the Spitfire, Mosquito, and Sterling military aircraft.

Postwar production resumed by October of 1945 under the name Jaguar Cars Ltd., using the prewar models with slight improvements to the mechanical components. The first truly new postwar Jaguar arrived in 1948 as the saloon and drophead XK 120 Series. Along with stunning appearance, it was equipped with the new double overhead camshaft six-cylinder engine, variations of which were destined to power Jaguar motor cars for nearly four decades.

Fewer examples of the C-Type were built than the D-Type. They could accommodate two persons with storage space on top of the paneled sills on each side of the cockpit, and in the body 'tub' behind the right-front wheel-arch. Additionally, there is some space above the spare wheel within its tail bay. Although the C-Types were famous for their accomplishments on the track, they were genuinely habitable fast touring cars.

Work began with a new lightweight tubular space frame, one of the earliest uses of the technique in sports car construction. The steel tubing lightweight chassis with monocoque features had an independent front suspension with torsion bars and tubular shock absorbers, similar to the stock XK120. In the back, Jaguar creates a system that suspended the live axle from trailing arms with a single transverse torsion bar fixed at the car's center line. An upper triangular link at the right side connected the axle transversely and took torque reaction. The 3.4-liter XK engine received high-lift camshafts, a new cylinder head, racing pistons, and an un-muffled dual exhaust system, boosting power to 200 bhp. Lockheed 2LS four-wheel hydraulic drum brakes provided the stopping power for the 96-inch wheelbase vehicle. In the front were self-adjusting two-leading shoe brakes which helped with longevity during endurance races. Rack and pinion steering provided better response and control than the standard XK 120 recirculating ball steering box. Center-lock wire wheels were used for faster tire changes and better brake cooling. New aerodynamic bodywork with fluidic curves and bulges was designed by Jaguar stylist Malcolm Sayer. There was only one door, located on the driver's side, to satisfy technical inspectors. The entire nose of the XK 120C's body was a single piece that hinged at the front, allowing mechanics uninhibited access to the engine compartment. It took just six weeks to build the first three hand-built examples and were the first purpose-built race cars for the Jaguar Company.

The cars were initially known as the XK120C, with the C representing Competition. Prior to LeMans, the cars were secretly tested at the Motor Industry Research Association test track and once at Silverstone. The C-Type made their inaugural (and surprise) debut in 1951 at LeMans with a team of factory-sponsored cars. The cars brought to LeMans were XKC 001, driven by Leslie Johnson and Clemente Biondetti. Chassis number XKC 002 was driven by Stirling Moss and Jack Fairman and XKC 003 driven by Peter Walker and Peter Whitehead. After four hours of racing, Moss/Fairman was in the lead, Walker/Whitehead in second and Johnson/Biondetti in third. On lap 50, XKC 001 driven by Biondetti lost oil pressure and was forced to come into the pits. Regulations dictated that the problem must be fixed with the tools carried in the car. Since the problem was unable to be fixed with the tools on hand, the car was forced to retire. At midnight, eight hours into the race, Moss also lost oil pressure in XKC 002, throwing a connecting rod at Arnage. By this point, the Jaguar mechanics had identified the problem on the Johnson/Biondetti car in the pits. The problem was with a copper oil line in the sump had fractured. With the problem located, Walker and Whitehead in XKC 003 were informed of the problem and cautioned against unnecessary engine revs that exacerbated vibration periods. XKC 003 pressed on for 16 more hours. At 4:00 pm on Sunday Whitehead crossed the finish line, bringing the XKC 120C home in the first place and capturing the overall victory, the first British car to win Le Mans in nearly 20 years. The second car was a full 77 miles (nine laps) behind the first place Jaguar. The C-Type had set the fastest lap speed of 105.232 mph, 24-hour speed record of 93.495 mph, and greatest distance traveled in 24 hours at 2,243.886 miles.

The success of the C-Type brought increased interest from privateers, and 50 examples were built by early 1953.

At the 1952 LeMans, the three Works cars retired early due to new bodywork, which appeared more aerodynamic but did not provide sufficient airflow at speed, thus causing cooling system issues. After the Mercedes-Benz 300 SL dominant performance at the event, Jaguar engineers realized that the C-Type needed more to contend the overall victory. A final run of three lightweight Works cars was developed with several important upgrades. One of the most important improvements was the weight-saving components used throughout the vehicle, including new thin-gauge aluminum coachwork. They received more powerful Weber carburetors, an additional upper link to the rear axle, a rubber aircraft fuel bladder, and a fully synchronized gearbox and triple-plate clutch. These three cars were the only lightweight C-Types built by the factory and were the first disc-brake-equipped entrants to ever run LeMans. The use of disc brakes was quite significant in the race's outcome. The low weight and disc brakes made the C-Types essentially unmatched through the curves. The cars continued to set the race-leading pace at LeMans, and by daybreak, only of the three Ferraris remained, while all three Alfa Romeo's had retired early. At the completion of the 24th hour, the C-Type was in first and second, followed by Briggs Cunningham's C5-R in 3rd, and the final C-Type in fourth.

By the end of 1953, Coventry had turned their attention to the development of the next sports-racing model, soon to be known as the D-Type, to contest the following year's LeMans.

The Jaguar XK-120C's victories at LeMans brought massive publicity, which in turn inspired road car sales. 53 examples of the C-Types were built, with 42 percent exported to North America were John Fitch, Phil Hill, Masten Gregory, and Sherwood Johnston notched up many stateside victories in the 1952 to 1954 period. The introduction of the XK120 had brought resounding acclaim, but it was the C-Type that firmly established Jaguar on the map as a winning manufacturer. The well-balanced and fast C-Type was a pure sports car in every respect.
by Daniel Vaughan | Feb 2020

The Jaguar C-Type was produced from 1951 to 1953 with an estimated 54 being produced. After a team of Jaguar XK 120C, the C representing competition, vehicles had an excellent showing at LeMans, William Lyons commissioned a car to be built that could contend for the overall victory. Malcom Sayer designed the aerodynamic body and Bob Knight was responsible for the lightweight, multi-tubular,....
Continue Reading >>

In 1951, Jaguar launched an assault on LeMans with the XK120C or C-Type. The 'C' was for competition and Jaguar wasn't kidding. It was pure race car designed with a space-frame chassis made of steel tubing along with an independent rear suspension. T....[continue reading]

Jaguar C-Type with chassis number XKC-050 was finished in British Racing Green, body number K-1050, and engine number E1049/8. It received registration ZU 2357, and just a month later it was entered in the 1953 Tourist Trophy at Dundrod, a World Spor....[continue reading]

The 1955 24 Hours of Le Mans would be forever remembered, not for the 24 hours of racing, but for the tragic and terrible events that would take place after just two. The consequences would be dire and would send shockwaves throughout the racing world....
© 1998-2021. All rights reserved. The material may not be published, broadcast, rewritten, or redistributed.