Volkswagen designed its 'people's car' before World War II, but production didn't begin until 1946. In 1953, VW turned to German coachbuilder Karmann to produce a convertible version of the Beetle. The convertible remained in production through 1979.In 1962 Volkswagen's production reached 819,326 cars in Germany, plus a few in other factories around the world. It was 1965 when that number exceeded on million. The Cabriolet, sometimes Convertible, was the model #151 with the vast majority of the bodies built not by Volkswagen but by Karmann, well before they joined forces in a merger. Between 1958 and 1967 around 103,000 'Karmann Kabrioletts' - so said their domestic tag - were produced although there are few like this one. This 1962 Pacific Blue VW has had only two owners. It underwent a 'body-off' restoration - the body bolts to a simple sheet steel floor pan, that serves as the chassis - to its original specifications using only all-German parts.
The Beetle is perhaps the best-selling car of all-time. Truly, a recognizable shape that has stood the test of time. The vehicle is still being produced in Mexico, continuing the long-time running record.Adolf Hitler was searching for a people's car that was capable of transporting three children and two adults at speeds of sixty miles-per-hour. The car was to be inexpensive, costing the same as a motorcycle. Ferdinand Porsche was commissioned to produce such a vehicle. There are many theories as to where the designs originated from. Some believe Hitler designed the vehicle. Some theorize that it was Joseph Ganz's 1920 design that was the true inspiration for the Beetle design. Porsche had created designs for the Mercedes-Benz 170H, which played into the design of the Beetle.
Inspiration for the Beetle had been drawn from the Tatra vehicles, mainly the T97, that had been designed by Hans Ledwinka. Due to the similarities, Tatra launched a lawsuit which never really materialized due to Germany invading Czechoslovakia. The lawsuit was later re-opened after World War II and Volkswagen was forced to pay Tatra 3,000,000 Deutsche Marks. This left Volkswagen with little money for development of new Beetle models.
The Volkswagen Beetle first came on the scene in 1947, but they were known by a different name. KdF, short for Kraft durch Freude meaning 'power by joy', was designated to these small, gas-friendly vehicles. In English, the name Beetle was used. In German, they were known as Kafer, and in French they were called Coccinelle. These little bundles of joy featured mechanical drum brakes and a gearbox void of synchromesh. In 1949 the Volkswagen logo was placed on the rims. The engine was expanded to 1131 cc and was capable of producing 25 horsepower. The models that were produced after October of 1949 could be started without a 'starting crank'.Two convertible options were offered by Volkswagen in 1949. The two-seater design, designated 14A, was penned by Josef Hebmuller. The four-seater Type 15 version was designed and produced by Karmann of Osnabruck. The four-seater was vastly more popular and stayed in production for 30 years.The 14A was stylish and attractive, with the major shortcoming being a fire that destroyed the factory where they were being produced. The two-seaters featured a rear deck nearly identical to the front hood. The strength of the car, lost by removing the roof, was amplified by a stronger windshield frame and dual Z-section girders located under the floor. In 1953, the last of the Hebmuller rolled off the assembly line, after only 696 examples were produced.In a time when practicality ruled over style, the four-seater cabriolet was king. The Karmann company had a long history of designing and building cars. In business since 1901, was familiar with assembly line production, benefits and features of different types of metals, and the styles of multiple markets.
The mechanical, cable-driven brakes were replaced with hydraulic brakes in 1950.
During the 1950's the Beetle saw exterior and interior improvements. 1951 saw the addition of arm-rests which were discontinued just a few months later. In 1952, 2nd-4th gears became synchronized. The dashboard was redesigned with a glove compartment. The rear of the Beetle was updated in 1953, receiving a new single oval pane window in place of its original split rear window design. In 1955, the bumper was improved and electrical direction-indicators were installed. A second tail-pipe was added. The front seats became wider and could be moved to three different seat-back adjustable positions.In 1956, the tires became tubeless. Near the end of '56, side view mirrors became standard on all Beetle models.In 1957 the front window was increased by 17 percent while the rear window received a 95 percent increase. A new dashboard, rear view mirror, radio, and a speaker appeared. The turn signals would now turn-off automatically. Up to this point, a roller pedal had been used to initiate acceleration. This was the year that the gas pedal replaced the roller pedal. In 1958, ivory disc wheels were offered.In 1960, an engine capable of producing 34 horsepower was offered. The speedometer was increased from 74 mph to 87 mph. A windshield-wiper washer system became available. The front directional light was changed from white to amber.A gas gauge was added in July of 1961. In 1963, the seats were changed from wool upholstery to synthetic. The VW emblem located on the hubcap was no longer painted. The safety of the vehicle was once-again enhanced with enlarged directional lights.There were minor changes in 1964. The windows did, however, become larger.In 1965, the front axle was improved. The ongoing saga of incremental improvements received another chapter - A defroster vent was added to the center of the dashboard.The Beetle continued to be sold in the United States until 1978 with the convertible version sold until early 1980. Sales continued in Europe until 1985. Developing countries, such as Mexico, have been developing the Beetle since 1964 and the vehicles have remained in production since that time.
By Daniel Vaughan | Jan 2019 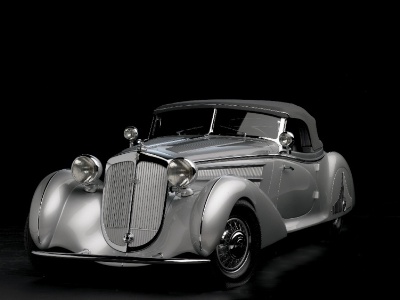 A stunning, multi-award winning 1938 Horch 853A Erdmann %26 Rossi Sport Cabriolet, judged Best of Show at the 2004 Pebble Beach Concours dElegance, will return to Californias Monterey Peninsula, August 17–18, as a featured attraction at RM Auctions...
© 1998-2020. All rights reserved. The material may not be published, broadcast, rewritten, or redistributed.