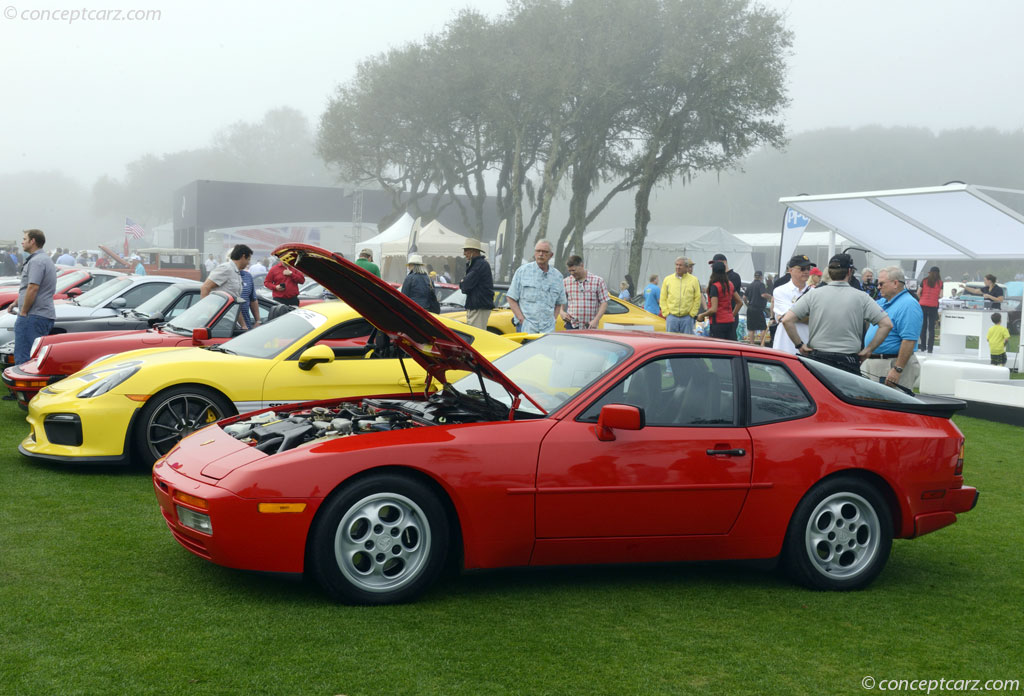 The Porsche 944 luxury sports car, built from 1982 to 1991, had greater visual presence and performance than the preceding 924 model. It was fitted with a new all-alloy, 2.5-liter inline four-cylinder engine, revised bodywork with wider wheel arches, more creature comforts, better-stopping power, improved suspension, and a fresh interior. Bostyles included a coupe or cabriolet. In 1986, the 944 Turbo was added to the lineup powered by a 2.5-liter four-cylinder turbocharged engine offering 220 horsepower. With strong sales, Porsche revamped the model in early 1988 resulting in an increase in horsepower.

The Porsche 944 Turbo, known internally as the 951, was introduced for the 1986 model year. With the help of a turbocharger and intercooler, the engine developed 217 horsepower at 6000 RPM. It had improved aerodynamics, an integrated front bumper, standard 16-inch wheels with optional Forged Fuchs, and the widest turn signals fitted to any production car. To cope with the higher horsepower output, the gearbox was strengthened and given a different final drive ratio, and the brakes of the 911 were installed, with Brembo 4-piston calipers and 12-inch discs. All U.S. models came standard with ABS. To handle the additional weight, the suspension was slightly stiffed with progressive springs.

The Porsche 944 Turbo holds the distinction of being the first Porsche production car to use forged pistons and a ceramic port liner to retain exhaust gas temperature. In 1987, it became the first production car in the world to be equipped with driver and passenger-side air bags as standard equipment.

A year after its introduction, the interior received a low oil level light and a 180 mph speedometer as opposed to the 170 mph speedometer fitted to the 1986 models. The transmission oil cooler was removed, and the suspension received minor changes.

The 1988 model year brought about the introduction of the Porsche 944 Turbo S powered by a more powerful engine, known as M44/52, offering nearly 250 horsepower and 258 lb-ft of torque. The increase in horsepower was due to larger KKK K26-8 turbocharger housing and revised engine mapping. Zero-to-sixty mph now took 5.5 seconds and had a top speed of 162 mph (an improvement over the prior 0-60 mph of 5.9 seconds).

The 16-inch Fuchs forged and flat-dished wheels were known as the Club Sport design. The wheels were 7-inches wider at the front and 9-inches wider at the rear. The fender edges were rolled to house the larger wheels. The 'M030' suspension option came standard, consisting of Koni adjustable shocks, progressive rate springs, larger hollow anti-roll/torsion bars, and harder durometer suspension bushings. In the front were ride height adjusting threaded collars. The front brakes were sourced from the 928 S4, with larger Brembo GT 4-piston fixed calipers and 12-inch discs. The rear brakes remained the same as the Turbo.

The interiors featured power seats for both front occupants, and a 10-speed sound system and equalizer+amp was a popular option.

Rothmans Porsche Turbo Cup
Rothmans International had been title sponsors of the overall winning 956s in the 1982 and 1983 24 Hours of Le Mans and supported the purpose-built SC/RS 911 of 1984 when the FIA introduced rally championship to run through much of Europe and the Middle East. They became the chosen sponsor of the Canadian-national, single-marque race series conceived by David Deacon, then General Manager for Porsche Division, Volkswagen of Canada Ltd. Dealers were to obtain identical Porsche cars, outfit them in livery, and offer them to qualified drivers and race teams through Porsche Canada's dealer group.

The list of drivers included Scott Goodyear, Richard Spenard, Bill Adam, and Rick Bye. The model selected by Deacon with the LeMans derived type-944. The Cup series became a success both on the track and in the salesroom, prompting Stuttgart to develop a Cup series in Germany, France, and South Africa using a Weissach prepared 944 Turbo. 192 cars were built globally with approximately 36 to 39 being sent for Deacon's North American circuit.

The Turbo Cup cars were visually similar to the standard production 944 but had no less than 52 unique upgraded features. The tub was reinforced with a full Matter light-alloy roll cage and received additional welds to the unibody design. The bodies were made from steel, aluminum, and fiberglass and the sunroof was removed. Mechanical upgrades including a fast-ratio rack-and-pinion steering box, limited-slip differential, bespoke heavy-duty brakes with 12-inch rotors and driver-controlled ABS system, strengthened clutch and transmission, fully adjustable 'coil-over' Bilsteins, large sway bars, and a strut tower brace. Under the fiberglass hood (the only fiberglass component on the car) was the Weissach Turbo's M44/51 engine with a larger KKK K26-8 turbocharger and improved DME mapping. Horsepower rose in excess of 325 bhp, up from 217, and over 600 pounds had been shed from the normal production model.
by Daniel Vaughan | Apr 2020

The Porsche 944 Turbo was introduced in 1986 and carried the internal designation of Type 951. Two years later, Porsche introduced the Turbo S with a more robust 250 horsepower engine. Along with the additional power, the Turbo S received numerous su....[continue reading]

In 1985, Porsche introduced a turbocharged version of the 944, boosting horsepower from 150 to 220 BHP. Along with the turbocharger, the 944 received an integrated front bumper, a strengthened gearbox, 911 brakes, a different final drive ratio, and s....[continue reading]

This Porsche 944 Turbo Cup was acquired by Agincourt Autohaus Leasing, delivered to Cooke Motors of Canada, and raced by Rick Bye for the entirety of the three-year RTC series. Bye secured a sponsorship deal with Reebok and had it finished in a liver....[continue reading] 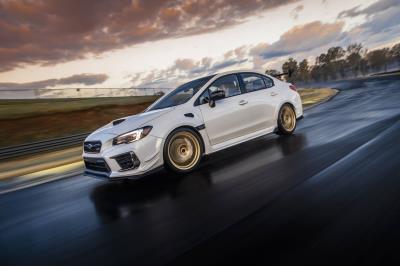