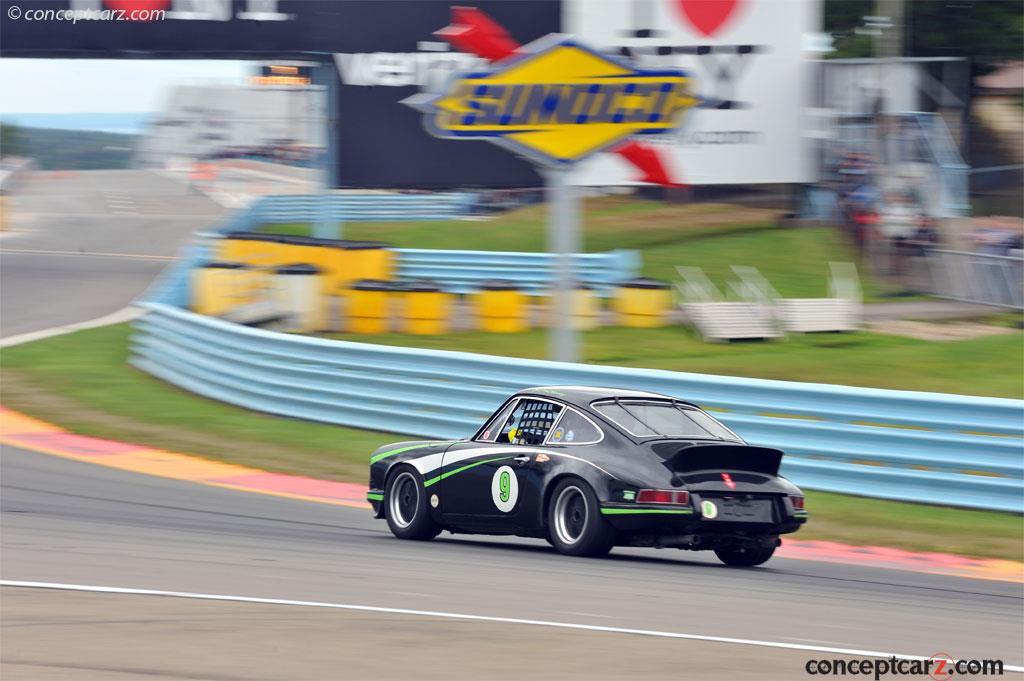 When the FIA introduced a new displacement maximum of three liters for the World Championship of Makes, Porsche's successful 917 endurance prototypes were regulated out of existence. Porsche's competition department began work on a series of purpose-built race cars built atop the 911 for the FIA's Group 5 Special Grand Touring class. The result of their work was called the Carrera 3.0 RSR.

Porsche revived the Carrera name for its top-of-the-range 911 for model-year 1973. Shown at the Paris Auto Show in 1972, it was given the designation 'Carrera RS' for RennSport, and was designed as a limited edition product to compete in Group 4 GT racing. Homologation required that at least 500 be built; demand saw that figure surpass that figure, with production eventually reaching 1,590 units (including prototypes and homologation units) which allowed it to race in Group 3 for standard GT production cars. The first 500 examples were built to exacting homologation specifications and used a thinner gauge sheet metal and glass. Most of the 911 Carrera RS models were built to 'Lightweight' (M471 competition) specification, with the other examples delivered as the (M472) Carrera RS Touring, which included 911S-type interior fittings and trim.

The Carrera RS was based on a lightened 911S platform with a revised suspension, flared arches, and wider 7-inch rear wheels and tires (the front wheels remained six inches wide). The 2.7-liter, fuel-injected, air-cooled six-cylinder engine offered 210 horsepower and helped the model achieve a top speed of around 150 mph. The 2.4-liter 911 S's 70.4-millimeter pistons and cylinders were replaced with 90-millimeter aluminum barrels which were coated with Nikasil (Nickel-silicon carbide). It was given a Bosch mechanical fuel injection and an 8.5:1 compression ratio. The result of this work was the new Type 911/83 engine with a 2.7-liter displacement. The old Type 901 with its 'dog-leg' first gear was also replaced with a strong Type 915 five-speed manual transmission.

The Carrera RS Touring and its competition-oriented sister were built with extensive use of lightweight materials. The bumpers (Series 2 Touring models had steel rear bumpers) and engine covers were made from fiberglass. The 'ducktail' rear spoiler was added to the engine cover after wind-testing proved it was effective at increasing high-speed stability by reducing rear-end lift.

There were 200 M471 club-level competition racers built and they weighed about 100-200 kilograms less than the Touring model, with an overall weight of 900-975 kilograms. They had a thinner-gauge steel for the roof panel, doors, and wings and thinner clear glass from the Belgian firm Glaverbel. Most of the Series 1 Lightweights received this special glass but only a few from the second series were available with this option. As would be expected, all non-essential materials were removed including sound insulation. The carpeting was thin and simple rubber mats remained. The clock, radio, glovebox door, sun visors, and folding seatbacks were removed. The door latch handles and armrests were replaced with plastic pull handles and pull-cord door releases.

Touring models were often equipped with options such as leather upholstery, sunroof, and Blaupunkt radios.

The performance was sensational with 0-to-60 mph times under six seconds, 0-to-100 mph times under 13 seconds, and a top speed of 150 mph. It had impressive power, was responsive, forgiving at the limit, and was nimble. In a similar fashion to its Carrera RSR brethren, many of the Carrera 2.7 RSs were enjoyed for competition use.
by Daniel Vaughan | Sep 2019

Considered one of the finest and sportiest cars of all time, the Porsche 911 Carrera RS Lightweight was to epitomize all that an excellent driving car could be. The result would be the very definition of 'Power-To-Weight-Ratio' and a must have for al....[continue reading]

One of the first five hundred 911 Carrera RS Homologation Series, it (Chassis #9113600342) was the first right-hand drive lightweight sold in Great Britain, built in November 1972 and sold in February 1973. The only option was a limited slip. The c....[continue reading]

The Carrera RS is a unique, limited edition model that has become, perhaps, the most important of all 911 models. Meaning 'race' in Spanish, it was the first Porsche 911 model to carry the name 'Carrera'. In addition, 'RS', which stands for Rennsport....[continue reading]

This 1973 Porsche 911 RS Carrera M471 Lightweight vehcle was offered for sale at the 2007 Blackhawk Collection Exhibit held at the Pebble Beach Concours. It carried a price tag of $450,000.....[continue reading]

This RS Touring is an all numbers matching car that has less than 75,000 kilometers. It has been well maintained over the years by the first three owners. In 1989 Mr. Harvey, the fourth owner, employed Auto Farm of the UK to overhaul the car.....[continue reading]

This example is the earliest known 2.7 Carrera RS model built. It left the factory in the same light yellow livery as it wears today. The cars early life was spent in Germany; in the early 2000s the car was treated to a restoration in California an....[continue reading]

This 1973 911 Coupe did not start out life as an exclusive 911RS, but it looks like one now, after a restoration that incorporated many upgrades, including the telltale RS cosmetic pieces. Unlike some cars that have been backdated to simulate the 91....[continue reading]

The Carrera RS could race from zero-to-sixty in just 5.5 seconds and zero-to-one hundred in 13 seconds. It covered the standing-start kilometer in 25.4 and achieved a flat-out maximum of 149mph. ....[continue reading]

This original tangerine Porsche 911 RS 2.7 Touring was delivered new to Porsche Austria on February 23, 1973. In 1979, it was returned to Porsche for a full conversion to M471 lightweight specification using only correct factory parts, including very....[continue reading]

This model is considered by many to be the greatest classis 911 of all-time. RS means Rennsport or Race Sport. The Carrera name was re-introduced celebrating Porsche's class victories in the Carrera Panamericana races in Mexico in the 1950s. The RS w....[continue reading]

The 1973 Porsche Carrera RS 2.7 was envisioned as a homologation special. Rules stated 500 road-going examples were to be built to qualify the new car for Group 4 GT racing. The RS was a substantially modified variant of the 911 S with weight-saving ....[continue reading]

The Carrera name comes from the 1950's Mexican Carrera Panamericana road races. RS means Rennsport, or race-sport. And its very being came from Porsche's need for a homologation special to allow world race entries. 1,580 were built although only 500 ....[continue reading]

The car (white with blue stripe) was delivered to a Swiss buyer who club raced the car for several years. In 1985 the car was purchased by renowned Porsche restorer Jim Newton who performed group-up restoration. In 1986 the car was shown at the Parad....[continue reading]

The origins of the 1972-73 RS (RennSport) lay in the racing department's desire to widen the scope for the 911 Group 4 Special GT racing. The RS was developed from the F-program and applied the lessons learned from earlier stripped-out rally and cust....[continue reading]

By the end of 1972, Porsche was left without many options. Regulations changes had made continuing in the World Sports Championship all but impossible. However, the closed door in the prototype ranks would lead to the company walking through the GT d....[continue reading]

The Carrera RS was Porsche's initial racing homologation version of the 911. Its ducktail spoiler and wider rear wheels were both firsts for the company. These, along with a displacement increase, from 2.4 liters to 2.7, gave it significant power and....[continue reading]

The now legendary 2.7 Carrera RS was a true sports car in every respect. It was essentially race ready, and could be driven to and from the track. Many privateers did just that, and as an answer Porsche offered the Carrera RS Lightweight. The car was....[continue reading]

The Porsche 2.7 RS was a homologation special, as Porsche needed to build 500 road-going examples to qualify the new car for Group 4 GT racing. The RS was a modified variant of the 2.4-liter 911 S. The engine had an increased displacement, used vario....[continue reading]

There are many enthusiasts who consider the 1973 Carrera to be the finest 911 of all time. Carrera name comes from the 1950's Mexican Carrera Panamericana road races. RS means Rennsport, or race sport. And its very being came from Porsche's need for ....[continue reading]

Number 670 is one of 1,580 Porsche Carrera RS 2.7 models produced in 1973 and was sold to a doctor in Palermo, Sicily. In the early 1980s it was imported to North Carolina where it was stored and hardly driven. The current owner acquired it in 2013 a....[continue reading]

To meet homologation requirements, Stuttgart planned to build a minimum of 500 examples of the Carrera RS. After it quickly sold out during the Paris exhibition in 1972, another 500 examples were soon greenlighted. By the time production came to an e....[continue reading]

Porsche built 1,590 examples of the Carrera RS, including 'Homologation,' (or 'H' cars), allowing it to qualify the model for Group 3, standard GT production racing. The new RS 2.7 was introduced at the 1972 Paris Auto Salon and the first 500 cars qu....[continue reading]

This 1973 Porsche 911 Carrera RS 2.7 Touring is one of 245 RS 2.7 examples delivered new to Italy and one of 42 examples finished in the color of Bahia Red. Original equipment included sports seats upholstered with corduroy inserts, and a limited-sli....[continue reading]

Porsche created the now legendary 911 2.7 Carrera RS to compete in Group 4 GT Class racing. When introduced at the 1972 Paris 'Salon de l'Automobile' the first 500 sold immediately and 500 more were built. When production concluded there were 1,583 c....[continue reading]

This first-series M471 Lightweight is factory-finished in Grand Prix White over Black leatherette. It came equipped with a limited-slip differential (M220), retractable radio antenna and loudspeakers (M440), and Dunlop tires. It was delivered new in ....[continue reading]

This Porsche 911 Carrera RS 2.7 Touring was delivered new to Italy in 1973. It was ordered in pale yellow over a black leatherette interior with Pepita cloth seat inserts and fitted with power windows. Six years later, it entered new ownership and se....[continue reading]