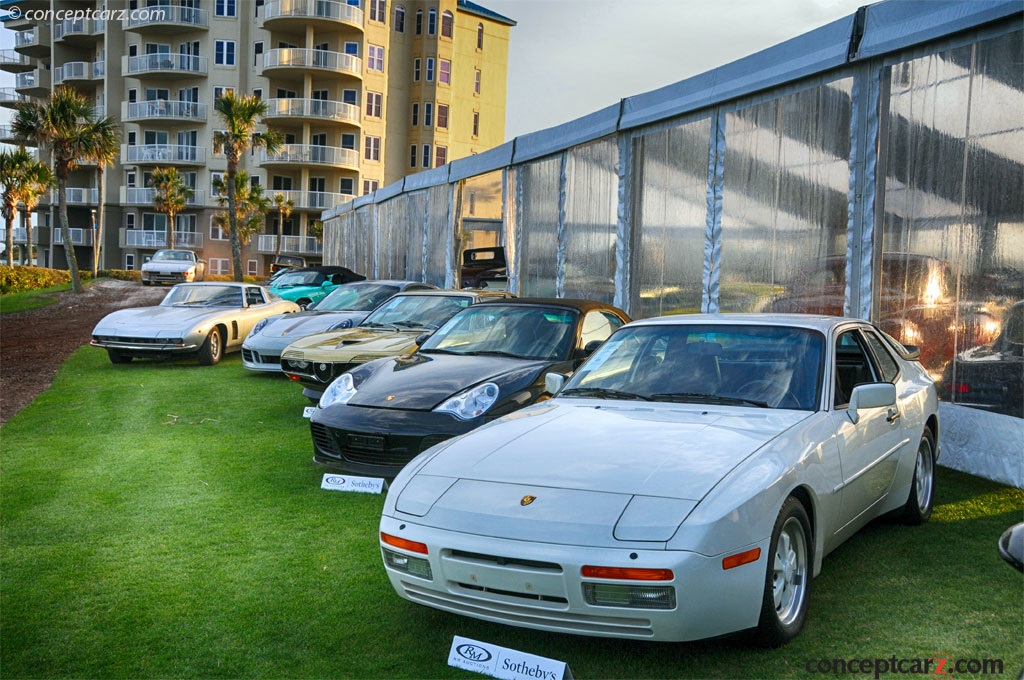 The Porsche 914 was the company's entry-level automobile, fraught with political controversy, and built with a handshake agreement between Porsche and Volkswagen. After Volkswagen ushered in a new chief, Porsche was left footing the bill for development. Nevertheless, the 914 went on to be a sales success and by the time production ended in 1975, a replacement was badly needed. A temporary solution was found with the 912E, a stopgap model built for a single year as Porsche scrambled to find a permanent replacement for the 914. Once again, they turned to Volkswagen for partnership in its junior sports car development. A new front-engine, rear-drive sports car was already under development by Volkswagen and Audi, to be sold by VW, Audi, and Porsche as part of their marketing alliance. Just like the 914, VW/Audi once again pulled its financial support. Porsche soldiered on and developed the car into the 924, which utilized an Audi-sourced, water-cooled 2-liter four-cylinder engine and rear-mounted transaxle.

The 924 was aesthetically pleasing, well balanced, and lightweight, but the Audi engine was widely criticized for being too harsh. Instead of starting from scratch, Porsche heavily reworked the 924 into the 944 of 1982. By placing the transaxle in the back, Porsche was able to achieve a perfect 50:50 weight distribution. The overhead-cam four-cylinder, water-cooled engine displaced 151.3 cubic-inches and was very smooth-running thanks to two counter-rotating balance shafts running at twice engine speed. The bodywork was revised with wider wheel arches similar in appearance to that of the 924 Carrera GT. The interiors were upgraded and the brakes and suspension were modified.

In 1985, performance increased further with the introduction of the 944 Turbo, also known as the 951. To cope with the 220 horsepower engine, the suspension was retuned, the clutch and gearbox uprated, and bigger Brembo brakes sourced from the 911 were installed.

The Porsche 944 Turbo came with a different front and rear spoiler than the naturally aspirated version and the rear skirt served as an underbody spoiler. The front end was slightly revised with integrated headlamps which improved aerodynamics. 16-inch wheels were standard and forged Fuchs alloys were optional.

The Porsche 944 Turbo was introduced in February of 1985 with a powerplant based on the '924 Prototype' that had competed at Le Mans. Even though there were some early setbacks for the new 944, the development of a four-valve cylinder head on a turbo....[continue reading]

This Porsche 944 Turbo has just 1,870 original miles. This was the first year of production of the 944 Turbo and this example is in incredibly original condition. There is an electric factory sunroof, air conditioning, chrome Porsche alloy wheels, So....[continue reading]

This Porsche is powered by a 2.5-liter 4-cylinder engine mated to a 5-speed manual transmission. It has been given one re-spray since new, rides on Fuchs wheels, has a leather steering wheel, and an electric sunroof. The odometer shows 95,000 origina....[continue reading]

This Porsche 944 Turbo is finished in Guards Red over Champagne. It is an original car with just 9,700 miles on its odometer. It has factory options that include leather seats, Blaupunk cassette radio and Monterey equalizer, electric sliding sunroof,....[continue reading]

The Porsche 944 was produced over a nine-year period from 1982 through 1991. It was the replacement for the 924 and came with a number of improvements in terms of creature comforts and performance over its predecessor. The performance was increased e....[continue reading]

When the Porsche 924 was introduced in 1976, it was met with both positive and negative reviews. Its front-wheel drive and Audi derived 2-liter engine was often criticized by Porsche enthusiasts. However, Porsche introduced the Type 944 in 1982. It h....[continue reading]

This Porsche 951 was originally sold in 1986 at Brumos Porsche in Atlanta, GA, and currently resides in Massachusetts. It is an all-original example that wears red paint under what's now a wrap, as a tribute to Brumos and Hurley Haywood. ....[continue reading]