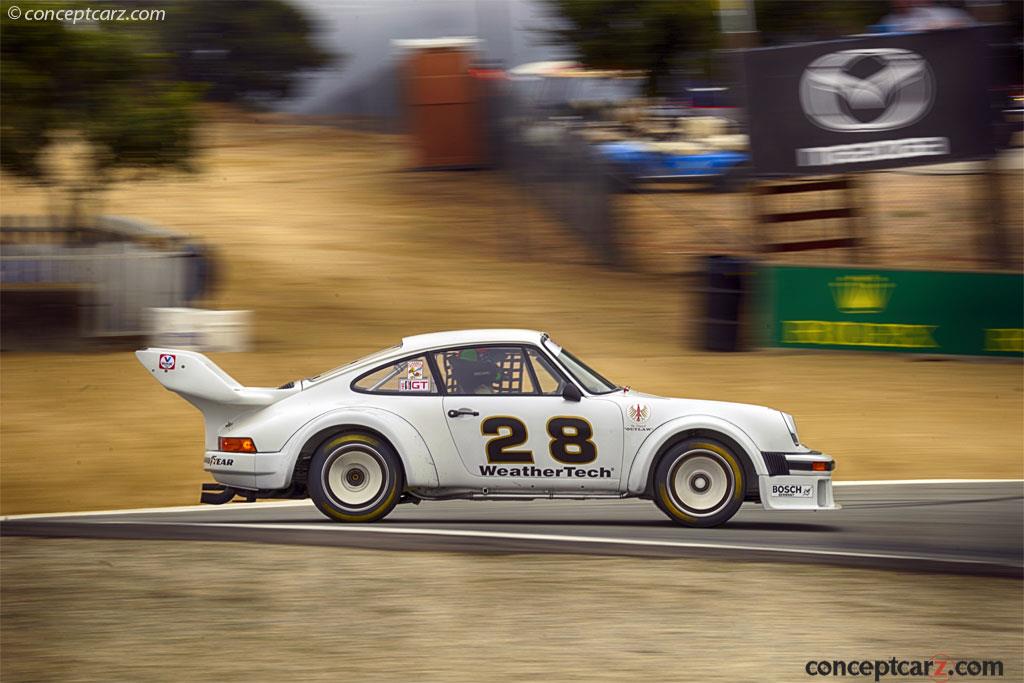 After the successes of the 934 in the SCCA's Trans-Am series in 1976, where the 934 had migrated after IMSA had effectively banned the car to curry favor with some of its major American sponsors and their teams, Porsche once again found itself at the center of sanctioning body politics. After a miserable season IMSA was back courting Porsche and the 934, hoping to have them and quality fields back for 1977.

After witnessing a special test session of a Brumos prepared and Peter Gregg driven 934, equipped with 935's wheel and tire package and rear wing configuration, John Bishop, the head of IMSA was convinced that the 934 would not dominate the series as other competitors had feared. Bishop approved the car to run 'as tested' for the 1977 season, and the SCCA quickly followed suit approving the 'up-rated' 934 for Trans-Am. The car would now be called the 934 1/2.

Peter Gregg, always looking for an edge over the competition, continued to try and further develop the 934 1/2 by integrating more and more parts from the 935. When IMSA felt this violated the agreement to run the 934s as tested for Bishop, they sent Gregg home from the April Road Atlanta race to re-fit his car to the agreed upon standard.

Gregg however, went straight to the SCCA which agreed to Gregg's modifications and more. Teams sensing an opportunity to 'develop' their own 934 1/2s and thus find their own advantages moved to the Trans-Am quickly.

The politics were not over with, however. When the Trans-Am visited Mosport in Canada the FIA had overriding jurisdiction as the event was a six-hour endurance race and was part of the World Championship of Makes. The race was won by Peter Gregg in his modified 934 1/2. Canadian Porsche dealer, Ludwig Heimrath seized the opportunity and protested Gregg's car. After several months, Gregg's win was nullified. Neither IMSA nor SCCA ever accepted the ruling and continued to accept the evolutionary nature of the rules.

The outcome was predictable. Porsche swept the top five places in the Trans-Am Championship point standings while over in IMSA Al Holbert won his second consecutive championship in his DeKon Chevrolet Monza.Source - Porsche

The Porsche 934 was a specially prepared racing version of the Porsche 911 Turbo built to satisfy the FIA Group 4 rules and to continue the marques success in that class. Homologation requirements stated at least 400 road-going cars were to be built within a two year period. The dimensions of the road and race cars were to be equal and modifications throughout were to be limited, except for safety.....
Continue Reading >>

In 1976, Porsche introduced a racing version of the Porsche 930911 Turbo which they dubbed, the 935. It was designed for FIA-Group 5 competition and was constructed in a similar fashion to the Porsche 934, which was used in Group 4 competition. The works team, with sponsorship by Martini, entered the 935 in the FIA World Championship for Makes with team drivers, Jacky Ickx and Jochen Mass in....
Continue Reading >>

One of the most successful shapes of all time, every young schoolboy can spot a Porsche 911 when one drives by. Porsche purists can wax poetic on the timeless lines of the series. And surely timeless is the right word. Introduced in 1964, even the very first 911 looks remarkably similar to todays iteration. The smooth, elegant contours, though, have occasionally taken on a distinctively sinister....
Continue Reading >>

In 1977, Porsche AG built only ten 934.5s. This car is the second one produced and was purchased by Peter Gregg. The car arrived in Jacksonville sometime in February or March 1977, requiring much preparation by the Brumos team for the car's debut at ....[continue reading]

This car is one of ten cars built by Porsche in 1977 exclusively for the North American IMSA and Trans-Am series. Chassis number 930-770-0958 was the eighth customer delivery and was campaigned by Canadian Ludwigh Heimrath in both IMSA and Trans-Am.....[continue reading]

This is one of only ten Porsche built 934.5 race cars. The Porsche 934.5 is a prime example of the intense competition in world sports car racing in the late 1970s. The Porsche 930 Turbo was configured for racing in two FIA categories: Group 4 (934) ....[continue reading]

The Porsche 934½ was designed to maintain the dominance achieved by the normally aspirated RSRs in IMSA's GT category. The 934 was one of two racing version of the Type 930, or Turbo Carrera, the company's first production-based turbocharged automobi....[continue reading]

The Porsche 934 was the FIA-homologated Group 4 racing version of the turbocharged 930 road car. In late 1975, the Porsche 934 prototype was submitted for inspection by IMSA's John Bishop for inclusion into the Camel GT series. Since the Porsche 917/....[continue reading]

The 1977 IMSA season launched 'the year of the turbo'. The problem was that the new Porsches had failed to produce a winning result at Daytona. Three new 934 turbo Porsches showed up for the 1977 12 Hours of Sebring. The #61 wearing Brumos Porsche's ....[continue reading]

The last of 10 factory 934.5s built to race in the US (the 935 was not yet IMSA eligible in 1977), the 934.5 ran 935 wheels/and tires, rear wing and removable fender flares. The car was campaigned by Cliff Kearns and his Desperado Racing team in IMSA....[continue reading]

DAYTONA BEACH, Fla. (Jan. 28, 2016) – Scott Pruett, known as a savvy and disciplined racer with a record 60 victories in IMSA competition, was honored by the Road Racing Drivers Club with the 2016 Phil Hill Award. RRDC president Bobby Rahal made...