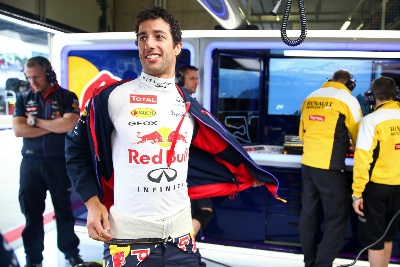 By Infiniti
SPIELBERG, Styria, Austria – After the high of a debut victory in Canada, Daniel Ricciardo landed with a bump at the Red Bull Ring, starting fifth and finishing eighth. He spoke to us afterwards.Q1: Daniel, not quite the same experience as Montreal…Ricciardo: Not quite! But that's racing: You have highs and lows. I've enjoyed the last fortnight having been on top of the pile, but nothing lasts forever. We expected to be quicker here this weekend and were optimistic about being in the top five and maybe sneaking onto the podium, but we simply didn't have the pace. On top of that, I dropped a few places at the start. I was pretty annoyed with myself during the race, but looking at it on the replay I don't think I had any options. I got squeezed. Nobody did anything they shouldn't have done, but I was pushed to the outside and that wasn't the place to be.Q2: The RB10 wasn't on the pace all weekend. What was it about this track that didn't suit the car?Ricciardo: Basically, the percentage of corners to straights. This year, as everyone knows, we're losing time on the straights but recovering it in the corners, and there are not enough corners for the amount of straight at the Red Bull Ring. Another factor was that our competitors seem to have found a bit more this week, and we weren't getting as much back on them in the corners as we have been previously. So, we've got a few things to look at.Q3: There was a silver lining on the last lap…Ricciardo: Yeah, it was a really good pass on Hülkenberg to snatch eighth place. Very satisfying to end the race like that. I didn't have much to lose at that point. There was a gap and I went for it – though it took me a couple of corners to get it done. Fun.Q4: How much did you enjoy the weekend overall?Ricciardo: It's been great. Everyone's shown us so much support. It's been awesome. The driver parade today was the busiest of the year, and the buzz was really good. Obviously for us the Red Bull Ring is always going to be a big thing, but it's not just that. We're in a country with a real F1 tradition, and it's been really welcoming to all of us – not just the Red Bull teams. I'm sure we'll be back for many years to come, and knowing Red Bull they'll probably make it bigger and better.Q5: Apparently all the drivers were given lederhosen but none of the others took to them with quite so much enthusiasm.Ricciardo: Seb did! He cracked eventually and put them on for the drivers' parade. I gave them a test run earlier in the week and rocked up in them this morning. They're surprisingly comfortable. A bit stiff at first but once you're in they're OK. They have a bit of give. I wouldn't travel in them – not the thing for a 20-hour flight to Perth – but I reckon Oktoberfest, with a couple of beers – yeah, you'd be OK for a day.Q6: It's your birthday next week; what do you have planned?Ricciardo: Karting! It's the team's #Openhouse event and I'll be on track with Sébastien Buemi. Technically it counts as a work event, though it's the sort of work I'm always happy to have more of. From here I'm going to Salzburg to do a TV show tomorrow night, then a couple of days in Monaco to sort out the laundry, then it's over to England for a couple of weeks. I'll be in the simulator next week before the British Grand Prix, and then we've got the test the week afterwards.Q7: Are you optimistic for a better result at Silverstone?Ricciardo: I'm always optimistic going to Silverstone because I love the circuit, but yes, it should be a circuit that suits us a little bit more. We've got to learn a few things about our performance here, but once we do that I think we'll be fighting in the top five and trying to get on the podium.