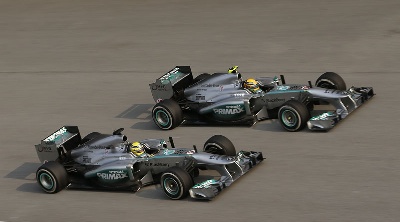 By The Formula One season resumes next week with the third round, the 2013 UBS Chinese Grand Prix, taking place at the 5.451 km Shanghai International Circuit, located 40 kms outside of the city. This year's race will be the 10th anniversary of the Chinese Grand Prix which made its debut during the 2004 season.• 'Shanghai specialist' Nico has led 78 of a total of 168 laps (46%) in the past three years in China
• Nico and Lewis have won the last two Chinese Grands Prix in 2012 and 2011 respectively
• Mercedes-Benz is the most successful engine manufacturer in China, with four wins in the past five races
• Shanghai has a medium Safety Car risk, with deployments in one third of the nine races so far
Nico Rosberg 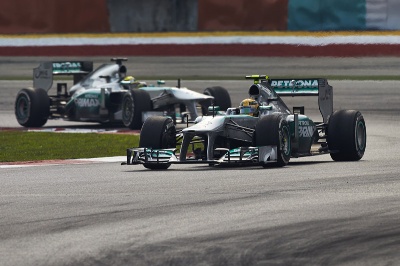 I travel to China next week with very good memories from winning my first Formula One race in Shanghai last year, and having led the race there for the past three years. I enjoy the Shanghai track a great deal and I have a positive feeling going there with the car that we have at the moment. The team have been working very hard to develop our car since returning from Malaysia and I will be at the factory on Monday to complete my preparations in the simulator for the next two races. We've had a strong start to the season and I'm confident that we can keep pushing and hopefully score some good results in China and Bahrain.Lewis HamiltonI'm looking forward to getting to China next week and going racing again; it feels like a long time since Malaysia! My first two races with my new team have been a great experience and everyone has made me feel so welcome. We've had a better start than we expected and to have finished in fifth and third places so far is really positive. I know there is much more to come so we will keep working hard and pushing the development of the car. I'll be at the factory this weekend and look forward to hearing about the work that's gone on in the last couple of weeks and the upgrades that we will take to China.Ross Brawn The Chinese Grand Prix of course holds great memories following the first win for Nico and our Silver Arrows team in Shanghai last year. That win was an extremely proud occasion for us all and certainly one that we hope to emulate in the future. Our season has started well, perhaps better than we expected, however we're fully aware that there is still a gap to close and that we must keep up the pace of development. A lot of hard work has taken place at our factories over the last two weeks to do just that and I look forward to seeing how that translates to track performance. The Chinese Grand Prix race is well established now in its tenth year and it's an important market for both Formula One and Mercedes-Benz. The circuit itself is challenging with fast curves, tight corners and two hairpins. The layout requires good straightline speed, braking stability and traction, and the temperatures are likely to be cooler than we have experienced in the first two race weekends.Toto WolffOne year on from Nico's win, a lot of people will be asking whether this is something our team can repeat in 2013. But like they say, yesterday's home runs don't win today's games, and that's definitely true for us. We start again from zero this year and need to work hard to adapt the car to suit the circuit and the tyre compounds we have available, in the conditions that we find on track next weekend. Then we will see where we stand relative to the competition. We have made a solid start to the season in the first two races with Nico and Lewis both performing at a very high and equal level. The development race will be critical this season so we have more new parts planned for China. Our aim has to be to improve on our good start to the season and continue scoring good points in both championships.