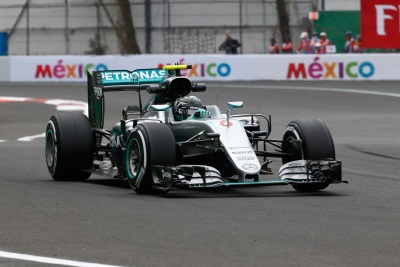 By Daimler• Lewis today took his 51st career victory – his first at the AUTÓDROMO HERMANOS RODRÍGUEZ and eighth of the 2016 season so far
• With that result, Lewis draws level with Alain Prost in joint second place on the list of all-time Formula One Grand Prix winners
• Nico completed a sixth Silver Arrows 1-2 of the season in P2
• Nico (349) leads the Drivers' Championship by 19 points from Lewis (330) in P2
• MERCEDES AMG PETRONAS (679) lead Red Bull (422) by 257 points in the Constructors' Championship
Lewis Hamilton 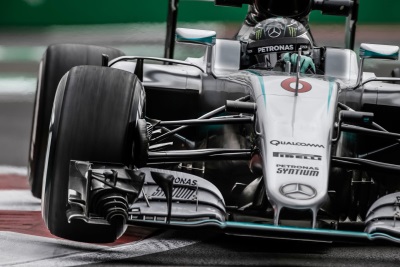 This weekend I've had really good pace. The car felt really strong from start to finish – night and day compared to last year. I had a good start – but it's such a long way down to Turn One that everyone just got the tow on me. The right front brake disc had glazed on the formation lap and I couldn't un-glaze it. I thought it might be okay – but when I hit the brakes it just locked up as the temperature came up and I went flying across the grass. I was lucky to get across and rejoin on the other side of the track. I had a big flat spot – and I mean seriously big. I could barely see the end of each straight with the vibrations and I genuinely didn't know if my suspension was going to last. I was really lucky not to catch it again and either destroy the tyre or have to come in for an early stop. Luckily, I got it under control and was cruising from quite early on. It's kinda crazy to think I now have 51 wins. It's a shame these results are coming so late in the season – possibly too late. You can look back at say that maybe if Malaysia didn't happen then I'd be in a different position right now. But that's motor racing. All I can do is my best and hope things go as they have done for the past two weekends. History has shown that it' s never too late – that's why I keep pushing and doing everything I can to repeat weekends like this. I hadn't won here before so it's a great feeling to do that in front of this incredible crowd. Now my sights are fully set on Brazil. I've never won there either – but if I can take this kind of performance into the next weekend I'l l be in a good position. Ultimately, as long as I feel I did the best I could in these final races, I can be happy at the end of the season.Nico RosbergThe Mexican fans were really outstanding again. I got goose bumps already in the stadium before the race at the driver's parade. But then, when the people were calling my name on the podium, that was the most emotional moment of the weekend. Thank you to everybody who made this event possible and to every Mexican fan who made their way today to the track today. Checo Perez and Esteban Gutiérrez can be really proud of their countrymen. I had a tough race today. At the start I had a good getaway and thought I would be able to take the lead from Lewis, when I saw he had a massive lock up and went straight through the grass. Then, suddenly, Verstappen hit me heavily after he had a lock up too and forced me off the track. Luckily my car wasn't damaged and it didn't cost me a position. Lewis was that little bit quicker today, so I didn't manage to achieve my goal and win here again. But being second is not too bad overall. Now I look forward to flying home after two long weeks and relaxing a bit with my family, ready to come back stronger in Brazil and go for the win there. I think the Interlagos track suits our car much better, so I'm looking forward to going there and seeing what we can do. 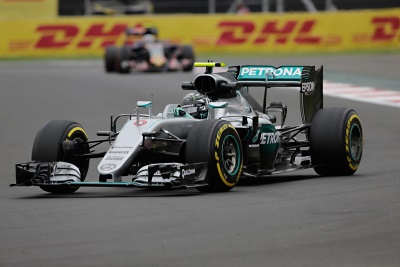 Toto Wolff, Head of Mercedes-Benz MotorsportMaybe that race looked straightforward from the outside but it really wasn't from within the team. It all began at Turn One when Lewis flat spotted his front right tyre under braking. That gave us a really tough call to make because we could see the vibrations getting worse and some of the peaks he was hitting were pretty scary. In any normal race we would have pitted him because of the risk of tyre failure or maybe worse but of course today that stop would have cost him the Championship. We had a lot of debate with the engineers, balancing the positive and negative aspects of the decision, and we were monitoring the numbers every single lap. But in the end, some of Lewis' bad luck this year got cancelled out today by making it through this situation and we pulled him into the pits as early as we could to make the one-stop strategy work. From there, he was able to control his pace all the way to the end, in spite of some high exhaust temperatures that meant we were juggling with engine modes to look after everything properly. For Nico, it was a bit tougher today as he was at risk from the Red Bulls through the race. Under some big pressure, he didn't put a foot wrong, kept a cool head and finished in a very solid second position, managing the same temperature issues as Lewis in the final laps. Overall, it was a great day, with Lewis showing he is one of the greats of our sport by equalling Prost's record of 51 wins. Congratulations to him for this incredible achievement. And now we head to Brazil with everything delicately poised. Lewis will keep fighting to the end but the championship is now in Nico's hands – a win in Sao Paulo could make him Champion. Our job is simple: to give the boys a perfect, fault-free car to battle it out on track and that will be the entire focus of our preparations. 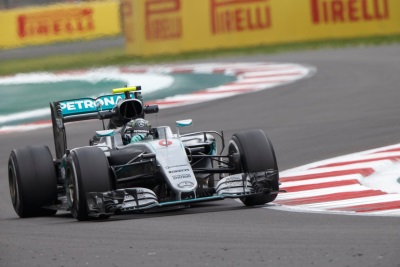 Paddy Lowe, Executive Director (Technical)A fantastic day. This is one of the best crowds of the year and I hope we provided terrific entertainment for them – particularly at the end of the race. It's incredible to have our drivers on the top two steps here after a weekend with such close competition. It was a great drive from Lewis to take the win. There was a great deal of stress for us at the beginning of the race after he flat spotted a tyre at the first corner. The vibrations and corresponding suspension loads were above permitted limits. I remember painfully Kimi's suspension failure in 2005 in similar circumstances. In this situation we knew that taking a precautionary pit stop would ruin Lewis' race and potentially his Championship, so we chose to cross our fingers and run him to the first stop, which we took a little bit early because of that issue. From then on it was quite straightforward on his side of the garage and he managed the race well from the front. Nico struggled a little bit more for pace and had a few scary moments with the challenge from Max and time loss through back markers. But he kept his head and got to the flag with a good margin in the end to take a well-earned P2 after a tricky weekend for him. A great job all round by the team and the drivers to get a perfect result at this fantastic race. A word too for Tony Walton, our Spares Co-ordinator, who represented the team on the podium today. Tony has been a part of the race team for 17 years and is now taking a factory-based job with us and a well-earned break from the tough business of travelling. It was great to have him up there today and a thoroughly fitting send off. Finally congratulations to Lewis for matching the 51 wins of Alain Prost. I have had the privilege to work with both of these great World Champions. so that is a very special statistic to appreciate.