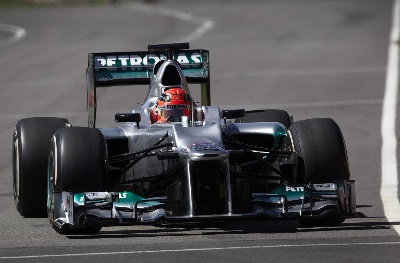 By Formula One's European season starts next week with the Spanish Grand Prix taking place at the Circuit de Catalunya in Barcelona. A familiar testing venue, the 4.655 km circuit plays host to Round Five of the 2012 World Championship.• The race has been won from pole in nine of the last 10 years; the exception was 2011, when Vettel won from P2
• At 730 metres, the run from the start-finish line to the apex of the first corner is the longest of the season
• Spain was one of just two races won on a four-stop strategy last season; the other was the Turkish Grand Prix
Michael Schumacher 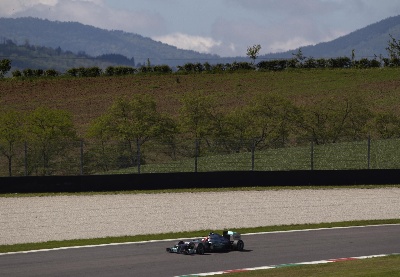 'After completing our testing programme in Mugello, we are now heading to the start of the European season in Barcelona next week. The positive thing about the test was that we could really concentrate on the developments we were aiming to work on. This should give us a good basis for further developments, even if maybe not for the next race to come. Barcelona is a track we have driven extensively on, and this is why we know that its characteristics do not exactly play fully into our hands. But then, we will definitely go there and try our best and at the same time keep on working for the things to come.'Nico Rosberg 'I am really looking forward to next weekend and racing in Europe again. It's quite unique to come to a track where we have done so many laps in winter testing, however the race weekend will be a completely different challenge. The test in Mugello this week was very positive for us, and I believe we will arrive in Barcelona with a much better understanding of the tyres and how we need to set our car up. Despite the familiarity of the track, there will still be a lot of work for us to do, and it should be a good challenge.' Ross Brawn, Team Principal 'After a hectic start to the season with four races and the test in Mugello, we are all looking forward to the European season getting underway and the familiarity that brings. The team had a good week in Italy for the test this week where we were able to work both on challenges that affected us during the initial races of the season, and evaluate a number of new developments planned for the forthcoming races. Spain plays host to the first European race, and although the Circuit de Catalunya is a very familiar venue for the team and our drivers, the weekend will bring its own challenges. I feel confident that we are continuing to make progress, and we will of course be working hard to continue that trend.' Norbert Haug, Vice-President, Mercedes-Benz Motorsport 'The first four races of the 2012 season have offered great, thrilling sport for all fans of Formula One. Eight drivers from six teams on the podium in four races - one more driver than in the entire 2011 season - and four winners from four races for the first time in nearly 30 years; you couldn't ask for more in terms of on-track excitement and unpredictability. No team has yet produced winning form at more than one event and achieving this consistency will be key. Our MERCEDES AMG PETRONAS team has registered a positive trend: after two difficult races at the start of the season, we were competitive and won in China then, in Bahrain, we were the third-fastest team on race day. We have been hard at work since then to further improve the competitiveness, consistency and reliability of our car. The Circuit de Catalunya will present a very different challenge next weekend to the ones in the first four races with track temperatures likely to be very different and with new developments on the cars. We will approach the race weekend in a focused manner in order to maximise our team performance with both drivers.'