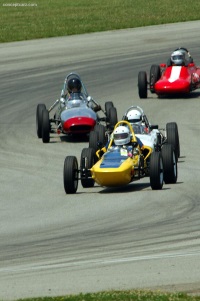 Zink C4
Formula Vee is a single-seat junior racing league that was governed by strict racing rules creating some of the most competitive racing of all time. In comparison to other racing leagues, Formula Vee (FV) is low-cost. The buy-in was around $2000 with a competitive machine costing just over $5000. In modern times the price has increased to around $15,000 - $20,000 for a competitive racer. In comparison to other racing leagues, this is still very low. Throughout the years, the rules have changed to lower the costs, improve performance, or to allow for the substitution of parts as many have since been discontinued. Since the playing field is relatively even in terms of mechanical components and capabilities, drivers must heavily rely on their skill and technique in order to emerge victorious.

Formula Vee traces its history back to 1960 and was started at the request of Volkswagen dealers. Three years later, the league was established and recognized as a class within SCCA (Sports Car Club of America). By 1966, it was ranked third out of the 17 classes, in terms of numbers of racers.

These mid-engines cars were limited to a 1200cc engine, gearbox and suspension - all courtesy of the Volkswagen Beetle. Air restrictors may be used to keep the power similar for all drivers. The transmission is a VW Type 1 four-speed gearbox along with a set of VW ratios. The body is fiberglass and the chassis is a tube frame. The chassis are known for their low-cost and easy repair and high structural integrity, allowing most drivers to walk away from accidents. Dunlop produces a tire specifically for Formula Vee and this is the only tire allowed in the sport. The tire is suitable in wet or dry racing conditions. Wings are not allowed. Limited slip differentials or any type of traction-control is prohibited. The 1040 pound racer is capable of speeds up to 120 mph.

Some of the more renowned producers of these historic racers are Zink, Autodynamics, Lynx, and Formcar. The cars are no longer produced but aftermarket parts are still available.

In the sport of FV, the best driver wins.