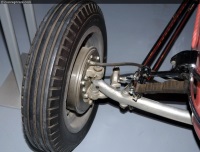 Maxwell Sprint Car
Sprint cars have had a very long history and enjoyed much popularity in the United States, Australia, and New Zealand. They are generally considered high-powered race cars with the purpose of competing on short dirt or paved tracks.

sprint Car Racing really came into its form after World War I, when many enthusiasts and armatures raced 'specials' (commonly referred to as 'race cars' and 'dirt track cars') at various dirt tracks, such as at the county fair horse tracks. The Ford Model T was a popular favorite, as it had the speed and parts were readily available.

Within the decades to come, the cars evolved greatly. The Ford engine was still popular, but other custom builders, such as Miller and Offenhauser, offered a very competitive engine that often outclassed the rest of the field.

Up to this point in history, around the 1930s, the cars were still not called 'Sprint Cars'. Midget cars had come onto the scene, and were much smaller than the larger machines, now called 'big cars.'

The post-World War II era brought about many new improvements. Cars were professionally built and competition continued to escalate. Some cars were still using the four-cylinder engines of the pre-WWII era, but many had been fitted with larger units, such as the Ford or Mercury flathead V8. The Chevrolet V8 became popular in the 1960s and soon outclassed other engines.

The name 'Sprint Car' was coined around 1950. As the years progressed, the cars were improved with the addition of safety requirements such as cage roll bars. The engines began producing more and more horsepower, and wider tires were needed to help with traction. Wings began appearing on the tops of car to help with down forces.

In modern times, the Sprint Cars can reach speeds in excess of 140 mph. Many engines have been tuned to produce 750 horsepower and more. The cars have an excellent power-to-weight ratio and are very entertaining to watch or compete in. Famous drivers from well-known racing series, such as IndyCar and NASCAR, have competed in Sprint Car Racing.