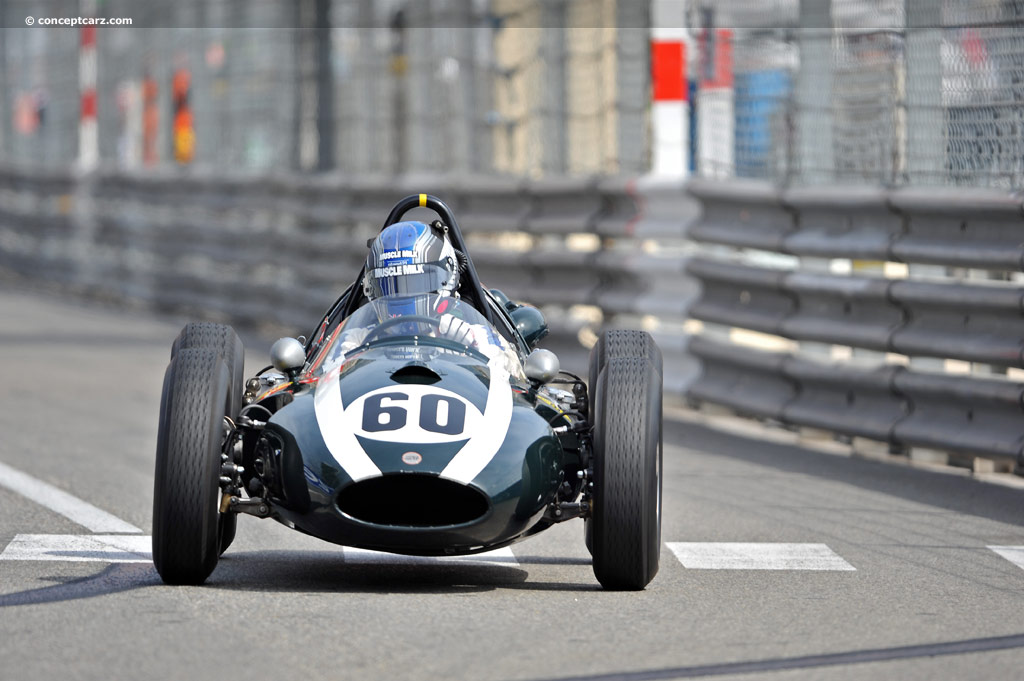 The Cooper Car Company entered business as early as 1946 and was formed by the father and son duo, Charles and John Cooper. With the help of like-minded individuals, such as Eric Brandon, they built race cars for both the hobbyist and the professional. The first production race car the company produced was combined from two front ends of a Fiat chassis and was powered by a 500cc motorcycle engine. The engine was placed behind the driver so to power the chain drive. The resulting production racer was dubbed the Cooper 500, and it was immediately successful, with Eric Brandon claiming its inaugural victory on its first outing. The success at the track brought sales for the new and revolutionary car, and Cooper soon became the largest post-war racing car manufactured. The build many rear-engined 500cc F3 cars, plus some front-engined Formula 2 cars. There were road-going cars with engines both front and rear mounted, then in 1955 came the introduction of the center-seat 'Bobtail' sports car powered by a rear-mounted, water-cooled Coventry-Climax 4-cylinder engine. A year later came the first water-cooled rear-engined Cooper-Climax for Formula 2, called the Type 41.

The Cooper T51 of 1959 would find its own place in history, when it became the first mid-engined racer to win the driver's and constructor's World Championships. The works drivers for 1959 included Jack Brabham and Bruce McLaren. Rob Walker's Stirling Moss scored the T51's first major victory during the non-championship Glover Trophy race at Goodwood. Five T51s contested the opening round of the World Championship held at Monaco, with Moss earning the pole position in his Cooper. Brabham was in the second position. Gearbox problems forced Moss to retire early, leaving Brabham to score his first Grand Prix victory. Another T51 driven by Trintignant finished in third place behind a front-engined Ferrari piloted by Tony Brooks. Brooks would be competitive throughout the season, along with Moss and Brabham. Brooks won at Reims and Avus where his more powerful racecar was better suited to the high speed tracks. Brabham won at Silverstone and Moss won at Portugal and Italy. The final round was United States Grand Prix at Sebring, with Brabham in the championship point's lead. Moss would fail to finish the race due to transmission problems. Brooks finished in third, while Bruce McLaren would claim the overall victory. Brabham's T51 ran out of fuel on the last lap, resulting in a Herculean effort by Brabham to push his Cooper the remaining 400 meters and across the finish line, earning a fourth place finish. Brabham clinched the title, the first of three world championships for the Australian.

The T51 would race the following season while the development of its replacement, the T53, was being completed. At the season opening Argentine Grand Prix, McLaren claimed another victory for the T51, outpacing the Ferrari driven by Cliff Allison. The new space-frame T53 would win five of the following nine Grand Prix events and capture another Championship for Cooper.
by Daniel Vaughan | Nov 2019

During the very early 1950s, Cooper had built a reputation by dominating the Formula 3 class. This had been a profitable venture and the company had wanted to diversify by moving into the Formula 2 class. Their customers had been asking for a Formula 2 car in which they could continue to climb the racing class ladder. Thus, the creation of the Formula 2 Cooper T20 MKIs. The car had proved capable,....
Continue Reading >>

This 1959 Cooper T-51 was driven in Formula 1 competition by Lucien Bianchi and Roy Salvadori. It has been driven by Steve Froines since 1983 in vintage races, after a ten year restoration. ....[continue reading]

This 1959 Cooper T-51 left the factory in October 1959 and was delivered to the Yeoman Credit works where it was fitted with a Coventry Climax FPF 2.5-liter engine and Colotti 5-speed transaxle. The car still has that original engine and transaxle. T....[continue reading]

This Cooper-Climax Type 51 Formula 1 Racing Single-Seater was originally purchased by privateer George Nixon in January of 1959. It came powered by a Climax FPF engine, possibly in 1.5-liter Formula 2 specification. It raced in 1959 at a club level e....[continue reading]

By the beginning of the 1962 Formula One season Jack Brabham had left Cooper to form his own racing team. It seemed the glories days of the double World Championship were well and truly behind them. However,...
1959 Formula One Season1959 Season Review