Sold for $152,200 at 2009 Bonhams - Quail Lodge Resort and Golf Club.
In 1969 the British specialist March Engineering Company was formed. The founding partners were former privateer owner/driver Max Mosley, former Winkelmann Racing team manager and racing driver Alan Rees, production specialist and club racer Graham Coaker and former McLaren and Cosworth chief chassis engineer Robin Herd. The name 'March' was formed from their collective initials. Mosley ran the commercial side, Herd was the designer, Alan Rees managed the in-house works racing team and Coaking supervised production at the factory.The first design of the company - created by Herd - was the Formula 3 March 693, which made its debut in the hands of Swedish driver Ronnie Peterson late in 1969. The goal of the new design was to create a one-car/one-driver team around Austrian driver Jochen Rindt. But as the partners' ambitions for the company rose, Rindt was opted out, to remain with Team Lotus.March was soon producing cars for Formula 2, Formula 3, Formula Ford, CanAm, and Formula 1. Also, they were fielding their own works cars in F1, F2, and F3.
The March racing cars showed tremendous promise in Formula 1 competition. Regulations changes for the new season prevented the World Champion Tyrrell Racing Organization to continue its alliance with the French Matra Company. Instead, Ken Tyrrell purchased the March 701 chassis. Tyrrell fielded two March 701 chassis and the March factory also fielded two sister 701s for their drivers, Chris Amon and Jo Siffert. A customer car was supplied to the Granatelli Brothers' SWTP Corporation for Mario Andretti's use, and another customer chassis went to Colin Crabbe's Antique Automobiles team to give Ronnie Peterson his Formula 1 debut. The March factory was busy, as new fewer than ten Type 701 F1 chassis were constructed that year.
This example is chassis number 701-2. At its racing debut in the 1970 World Championship at the South African GP, Jackie Stewart qualified pole position. Chris Amon was second fastest in his works 701.The 701 had stub-wing tanks on each side of the rectilinear monocoque chassis nacelle. This aerodynamic feature was created by Peter Wright of Specialised Mouldings Ltd and was an early move towards modern underwing 'ground effect' management. This ex-Jackie Stewart car had one Championship Grand Prix win and one non-Championship GP win to its credit. IT started in pole position on two occasions.In 2009, this car was offered for sale by Bonhams at the Exceptional Motorcars and Automobilia at the Quail Lodge in Carmel, CA. The lot was sold for the sum of $152,200 inclusive of Buyer's Premium.
By Daniel Vaughan | Mar 2012

John Love of South Africa was the first owner of chassis number 701/10. The car was campaigned extensively in local events with several impressive finishes, including a first at the Bulawayo 100 in June of 1970 (the vehicle's debut). He won three events in 1971 plus it was entered in the South African Grand Prix, but it failed to finish due to differential problems. Many years later, the car was campaigned by an American historic race driver. At the time, the car wore Tyrrell colours. Recently, it was restored to its original livery.
By Daniel Vaughan | Jun 2012

The first owner of chassis number 701/08 was Colin Crabbe for his Antique Automobiles Ltd. racing team. It made its debut at the 1970 Monaco Grand Prix driven by Ronnie Peterson. Currently, the car still wears the Antique Automobiles livery.
By Daniel Vaughan | Jun 2012
The late 1950s and early 1960s was a revolutionary time for many Formula racing series, as the benefits of mid-engine placement were utilized and cars made the drastic switch. This simple change of moving the engine from in front of the driver to behind, had a profound effect on performance and drastically changed the way the mechanical components operated. In the early 1960s, Formula 1 regulations limited engine displacement to just 1.5-liters. By the mid-1960s, the regulations were changed, capping displacement at 3-liters. For the 1967 season, Colin Chapman approached his friends Mike Costin and Keith Duckworth - the founders of the Cosworth engine company - to produce a suitable engine to comply with F1 specifications. They were interested but lacked the necessary resources to produce the engine. Lotus, who had just won the Indy 500 with Ford, persuaded Ford to help fund the project. Thus, the birth of the Ford and Cosworth relationship.
Cosworth modified a four-cylinder Ford engine into a 16-valve, FVA engine that displaced 1600cc and complied with Formula 2 regulations. This engine would become the basis for the 3-liter V8 DFV engines. The DFV, short for Double Four Valve, had dual overhead camshafts and four valves per cylinder. It was cast from aluminum by Cosworth and fitted with a fuel injection system. In this guise, the engine was capable of producing 400 horsepower. By the late 1960s, nearly ever team was using the Cosworth engine and it accounted for every victory in 1968, except one.
Obviously, the sport was rapidly changing and even aerodynamic aids such as wings had become popular and effective. March added their own unique feature to the sport of F1 by being the first to offer customer chassis. British manufacturer and Formula One constructor, March Engineering began operation in 1969 by its four founders, Max Mosley, Alan Rees, Graham Coaker and Robin Herd. The name 'March' was chosen by using initials from their first or last names. Each of these individuals brought unique qualities and talents to the team. Herd was the designer, Rees was the team's manager, Coaker oversaw production, and Mosley handled the commercial side of the operation. The purpose of the company was to provide chassis for customers competing in all racing categories. In 1969 the company built a Formula 3 car. A year later they produced an F1 racer, the 701, which they used for team competition and to supply to privateers. In the non-championship Race of Champions, Jackie Stewart gave March its first F1 victory. He won the Spanish Grand Prix a month later. In its first four races, it earned three victories, though the Spanish GP race was the only one that earned points toward the Championship. The March 701 was off to a great start, but this was short lived as manufacturers continued to develop and fine-tune their F1 cars. As the season wore on, the competition only got stronger. To make things worse, Stewart had switched to a Tyrrell. The March 701 had an aluminum monocoque and a Ford/Cosworth V8 engine with aluminum block and head. Power from the 3-liter unit was around 430 bhp which was managed through a Hewland DG300 5-speed gearbox. Ventilated disc brakes could be found on all four corners. In total, 11 examples were produced.In the years to come, the company would become more successful in more classes, except for the F1 program, than any other manufacturer. Their products appeared in Formula 2, Formula 3, Formula Ford 1600, and CanAm.
By Daniel Vaughan | Feb 2009 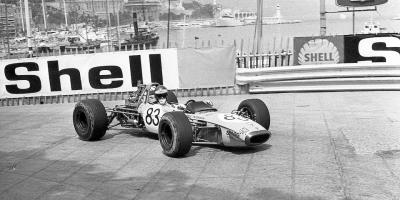 Ronnie Petersons Career-Launching Formula 3 Car to be offered at Bonhams Monaco Sale The legendary Swedish racing driver Ronnie Peterson, so affectionately nicknamed SuperSwede was one of the most universally loved figures in 1970s Formula...

In gambling and sports there is one word that seems to be absolutely foundational to both—luck. Heading into the 1970 season Jack Brabham had had his share of luck. Jochen Rindt, on the other hand, seemed to have none of it. This would all change on...
1970 Formula One Season1970 Season Review