Blending engineering achievement and sophisticated styling, DeVille has been completely reengineered and redesigned for the 2000 model year. The DeVille has been America's best selling luxury car for the past 14 years, and the new DeVille has been designed to carry this leadership role into the new millennium.The 2000 DeVille reflects the bold spirit of great Cadillacs of the past. At the same time, it advances Cadillac's vision to be a world leader in applying art and science to its products, building on a heritage of design leadership and technological ingenuity that over the years has set Cadillac apart from other luxury carmakers.The new DeVille is a trimmer, nimbler execution of a spacious luxury sedan. (concept carz) It is 3 inches shorter and 2 inches narrower than the car it replaces, giving it a trimmer, more athletic appearance. But its wheelbase is actually 1.5 inches longer, and its interior space is virtually as roomy as the 1999 model. The 2000 DeVille is still classified as a large car by the EPA.he 2000 DeVille is available in three models - DeVille, DeVille High Luxury Sedan (DHS) and DeVille Touring Sedan (DTS).Clean Lines

DeVille's overall appearance is trimmer, sleeker and more cosmopolitan.A new body structure, notably stiffer in both torsion and handling, provides the foundation for DeVille's new agility on the road and precise, responsive control. The G platform on which the new DeVille is built also provides the building block for improvements to crashworthiness as well as to noise, vibration and harshness control.The 2000 DeVille builds on Cadillac's rich tradition of pioneering technological innovations that offer real customer benefits. Most notably, DeVille features Night Vision, an important safety advancement. Night Vision is the first automotive application of a thermal-imaging technology that can assist drivers in seeing objects beyond headlight range during nighttime driving. As a complement to Night Vision, the 2000 DeVille offers Últrasonic Rear Parking Assist, a technology that assists the driver in rear parking maneuvers. The 2000 DeVille also features the auto industry's first full-width light emitting diode (LED) center high mounted stoplamp and taillights, a safety benefit because of a quicker 'on time' compared to incandescent bulbs. Night Vision, LEDs and Últrasonic Rear Parking Assist enhance DeVille's package of world-class active safety and security features. Add to these proven safety-cage construction, leading-edge passive restraints, a CD-based navigation system and OnStar, the revolutionary information and communications service, and the 2000 DeVille could arguably be the safest car on the road.Northstar Advacnements

The new DeVille features significant advancements in Cadillac's Northstar integrated powertrain and chassis system. The Northstar V8 has been redesigned to achieve excellent mileage with regular fuel, smoother and quieter operation, and certification as a low emissions vehicle for California and certain Northeast states. Highway mileage on the DeVille has been increased by 2 mpg to 28 mpg, with no decrease in performance.
StabiliTrak 2.0, the next evolution of Cadillac's world-class stability-control system, makes DeVille's handling even more predictable and consistent under all driving conditions and road surfaces. This enhanced version adds both side-slip rate control and active steering effort compensation. StabiliTrak 2.0 is standard on DTS and optional on DeVille and DHS.In addition to StabiliTrak 2.0, DTS is equipped with continuously variable road-sensing suspension (CVRSS) 2.0. This enhanced system adds three significant improvements —transient roll control, lateral support and stability control interaction. Únsurpassed Comfort

DeVille is renowned for unsurpassed levels of comfort and convenience. The 2000 DeVille takes comfort and convenience to an even higher level, with features like standard tri-zone climate control, adaptive seating, massaging lumbar seats and a new flexible center seat and storage system. Particular effort was focused on developing what may be the world's most luxurious and comfortable rear-seat environment on the road, incorporating features such as theater seating layout for optimum forward visibility, heated seats and power lumbar adjustments.DeVille regularly earns high marks in the most respected independent quality rankings. DeVille perennially ranks best in class, and among all cars it ranked second only to Lexus LS400 in the 1998 and 1999 J.D. Power & Associates surveys on five-year dependability. The DeVille engineering team established world-class quality as a top priority as part of an effort to attract import sedan buyers who cherish well-built cars.Source - Cadillac

During the Persian Gulf War, infrared technology enabled coalition military forces to own the night battlefield. With the introduction of Night Vision on the 2000 DeVille, Cadillac becomes the first automaker to bring the safety benefit of this technology to drivers. Improving vision at night is an important safety advancement. While nighttime driving represents only 28 percent of total driving, it accounts for 55 percent of all traffic fatalities, according to data from the National Highway Traffic Safety Administration (NHTSA). Of all pedestrian fatalities, 62 percent occur at night. In addition, highway safety authorities recorded more than 300,000 vehicle-deer collisions in 1997, many of which could have been avoided with more time to react to the hazard.While Night Vision is not meant to replace a driver's view out of the windshield, it gives drivers additional visual information beyond what their eyes are capable of seeing. Night Vision helps the driver detect potentially dangerous situations well beyond the normal headlight range.The extra vision extends three-to-five times the range of low-beam headlights and double the range of high-beam headlights. At 60 miles per hour, normal headlights provide a driver about 3.5 seconds to react to an object ahead. With Night Vision, the driver will have up to 15 seconds to react. The system also can help drivers see beyond the headlight glare from oncoming vehicles.In addition, Night Vision can help enhance personal security. For example, as a DeVille driver pulls into a driveway, the system can help detect a person hiding in the bushes or out of the range of the headlights.Thermal Imaging

Available as an option on all 2000 DeVille models, Cadillac's Night Vision is based on technology developed by Raytheon Systems Co. Night Vision uses thermal imaging, or infrared, technology to create pictures based on heat energy emitted by objects in the viewed scene.Everything emits heat to some degree. But humans, animals and moving vehicles emit enough heat energy to contrast sharply with their surroundings when viewed with Night Vision equipment.DeVille's Night Vision uses a refractive optical-lens system to gather infrared energy. A grille-mounted camera views the path ahead through an infrared-transparent window approximately three inches in diameter. Just behind this window, refractive optics are used to focus the infrared energy on a 1-inch-square detector. Information from the detector is passed to sensor electronics that translate the data into a monochromatic image.The virtual image that is produced looks something like a black and white photographic negative — hotter objects appear white and cooler objects appear black. Objects such as people, animals and running vehicles stand out from the black background of the night.Head-Úp Display

Because the virtual image is projected by a head-up display (HÚD) rather than on a flat screen mounted in the car, Cadillac's Night Vision helps drivers keep their eyes on the road and hands on the wheel. The image is projected near the front edge of the hood — in the driver's peripheral vision — and was designed not to obstruct the view of the road.
The image has a horizontal field of view of 11 degrees and a vertical field of view of 4 degrees. Objects in the image are the same size as the objects in the road scene, helping the driver relate the image to the road scene and judge the distance to an object.Night Vision powers up when the key is in the 'on' position, when the Twilight Sentinel photo cell indicates it's dark out, and if the headlights are on. Úsing a switch in the instrument panel, drivers can turn the system on and off, and they also can adjust the image intensity and image vertical position.During warm-up, the Night Vision logo is displayed until the sensor is ready. The logo is then replaced with the thermal image of the road ahead.Source - Cadillac 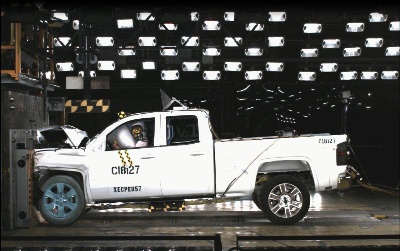 DETROIT – The regular and double cab versions of 2014 Chevrolet Silverado 1500 and the GMC Sierra 1500 have received the highest possible 5-star Overall Vehicle Score for safety as part of the... 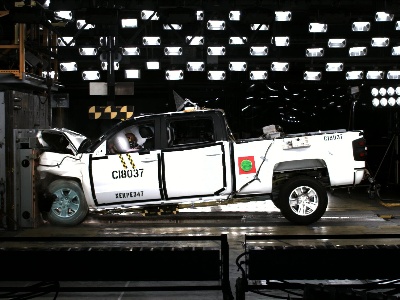 2014 SILVERADO AND SIERRA SCORE A SAFETY FIRST FOR TRUCKS 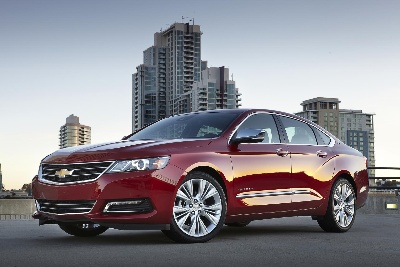 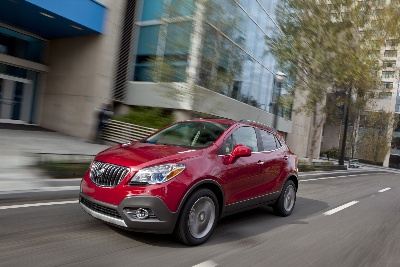 DETROIT – The 2013 Encore luxury small crossover brings a smaller footprint and high efficiency to the Buick showroom, but the brands newest model maintains the commitment to safety, joining all...
© 1998-2020. All rights reserved. The material may not be published, broadcast, rewritten, or redistributed.