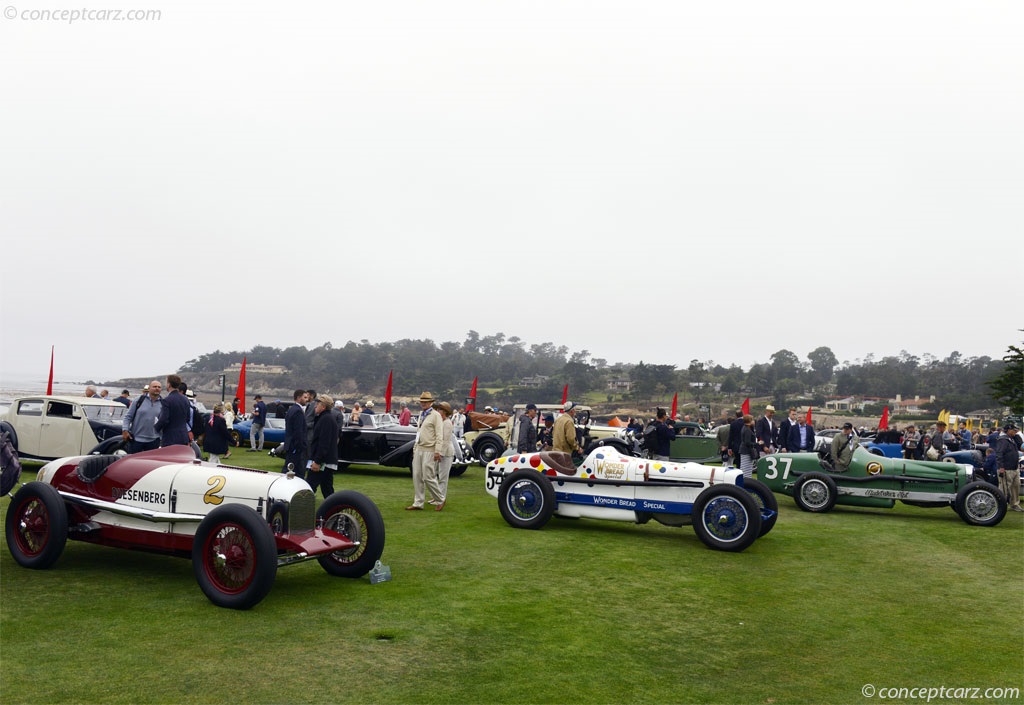 Boattail Racer
What is sometimes forgotten is that Duesenberg was active in racing and was a force in the racing world. In the early 1920s, Duesenberg raced some of the best cars in the world, winning the French Grand Prix at Le Mans and becoming the first American entrant to win that prestigious race. From 1913 to 1937, the Duesenbergs could be found racing in the Indianapolis 500, with eight of the first ten finishers in the 1922 race being Duesenberg, including the winning car. In 1930, there were five Duesenbergs entered into the Indianapolis 500. Peter DePaolo finished 5th which was Duesenberg's highest place in the race that year. This Duesenberg Indianapolis Race Car was first driven at the 1927 edition of the Indianapolis 500. It was raced in various forms until 1937. It was part of the 1929 Duesenberg factory team and placed third with Jimmy Gleason behind the wheel. Had it not been for some poor pit work at lap 195, it may have won the race. Originally owned by Henry Maley, it was entered in the 1930 Indianapolis 500, with Deacon Litz as its driver. Sadly Litz crashed on the 22nd lap, and the race was won by a Miller-Hartz Special driven by Billy Arnold accompanied by riding mechanic Spider Matlock; they took the lead on lap 3 and led for the rest of the race, which stands as an all-time Indianapolis 500 race record. This two-man Duesenberg raced a total of six times at Indianapolis between 1930 and 1937, three times with a Duesenberg 8-cylinder engine and then with Miller-Offenhauser 4-cylinder engines. The car's best finish was in 1933 when it was piloted to 3rd place by Lou Moore, but it also finished 8th in 1935 and 11th in 1937 (It was the last Duesenberg to race in the Indy 500 race). In 1947, the car attempted to qualify for one more Indy 500 with a flat-head Ford engine, but it was unsuccessful.
This car is powered by a 91.5 cubic-inch straight-eight engine fitted with dual overhead cams.

If there was one racer in the Formula One paddock that drivers and spectators alike believed should have scored his first victory before the start of the 1969 season it would almost unanimously be Jochen...
Grand Prix Racers
Model A
Model J
© 1998-2020. All rights reserved. The material may not be published, broadcast, rewritten, or redistributed.