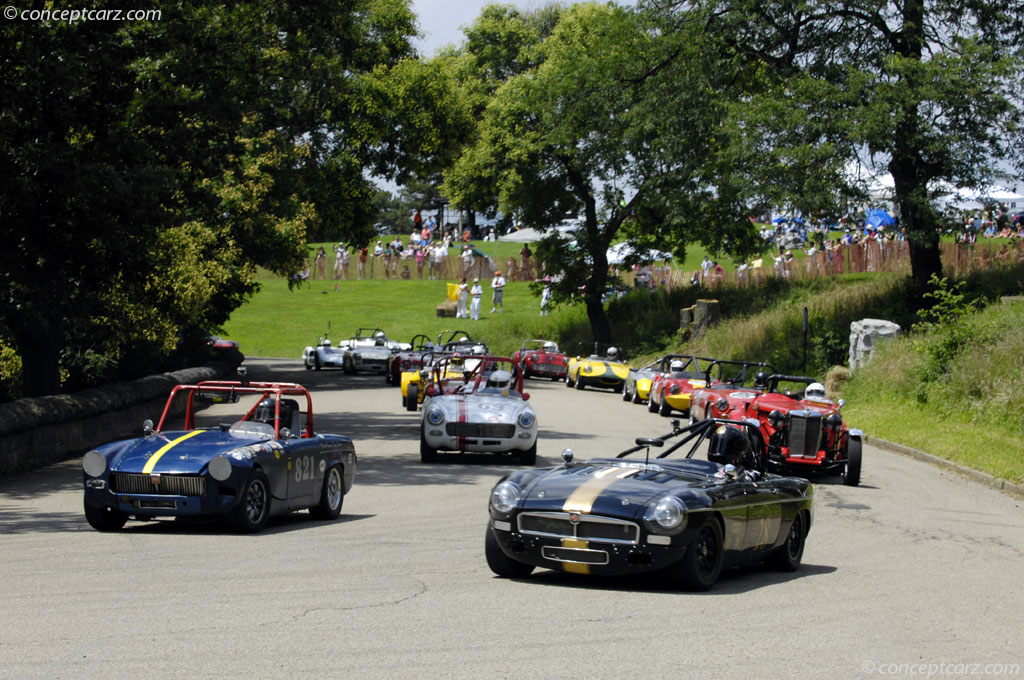 The MG Midget was produced from 1961 through 1979 with just over 226,000 examples produced. The first series was produced from 1961 through 1964 and is known as the Midget MKI. To bring it quickly to market and to save on development costs, among other reasons, the MG Midget was basically just an Austin-Healey Sprite MKII with MG badging. It was powered by a 948 cc A-series engine with twin SU carburetors. The body was suspended in place by a quarter-elliptic rear axle found on the original Sprite. The drum brakes were more than adequate to stop to 46 horsepower vehicle. By 1962 an upgraded 1098 cc engine became available which raised horsepower to 56 and torque to 62 foot-pounds. Due to the additional horsepower, the company placed disc brakes on the front to aid in quicker stopping.In total, there were 16,080 vehicles equipped with eh 948 cc engine and 9601 vehicles with the 1098 cc engine. The Midget was a simple vehicle with few thrills and amenities other than its sporty handling characteristics. There were no external handles to open the door. The vehicle was not very secure due to not having locks and the windows were comprised of sliding Perspex side screens.
The Midget MKII was introduced in 1964 and continued in production until 1966. It brought along with it much-needed updates such as wind-up-windows and external handles. In a sense, the vehicle became more practical. The ride comfort was improved with the removal of the rear springs and the introduction of half elliptical types. Standard horsepower increased to just under 60. In total, there were 26,601 examples produced during this time period.
The MG Midget MKIII was introduced in 1966 and stayed in production until 1974. Again, the engine grew in size and output. Fitted under the bonnet was a 1275 cc engine which produced an impressive 65 horsepower and 72 foot-pounds of torque. Cosmetically, little changed. One of the bigger changes was that the hood was now permanently attached to the car. The grille was slightly modified and the sills were painted black. Wire spoke wheels remained optional equipment with the standard versions being the 'Rostyle' units. By 1971, the square-shaped rear wheel arches became rounded. In total there were 100,246 examples produced during this series.The MG Midget 1500 was introduced in 1974 and produced until December 7th, 1979. Many of the changes that occurred were in cooperation with ever escalation safety and government regulations and standards. A large black bumper could now be found on the front and rear of the vehicle. The ground clearance was raised making the vehicle sit higher. To improve the strength of the vehicle the rounded wheel arches became square. A new engine could now be found under the hood; it was a 1493 cc engine that could also be found in the Triumph Spitfire. All four gears were now synchromesh. In total there were 73,899 examples of the Midget 1500 created.
By Daniel Vaughan | Sep 2006
Concepts by MG