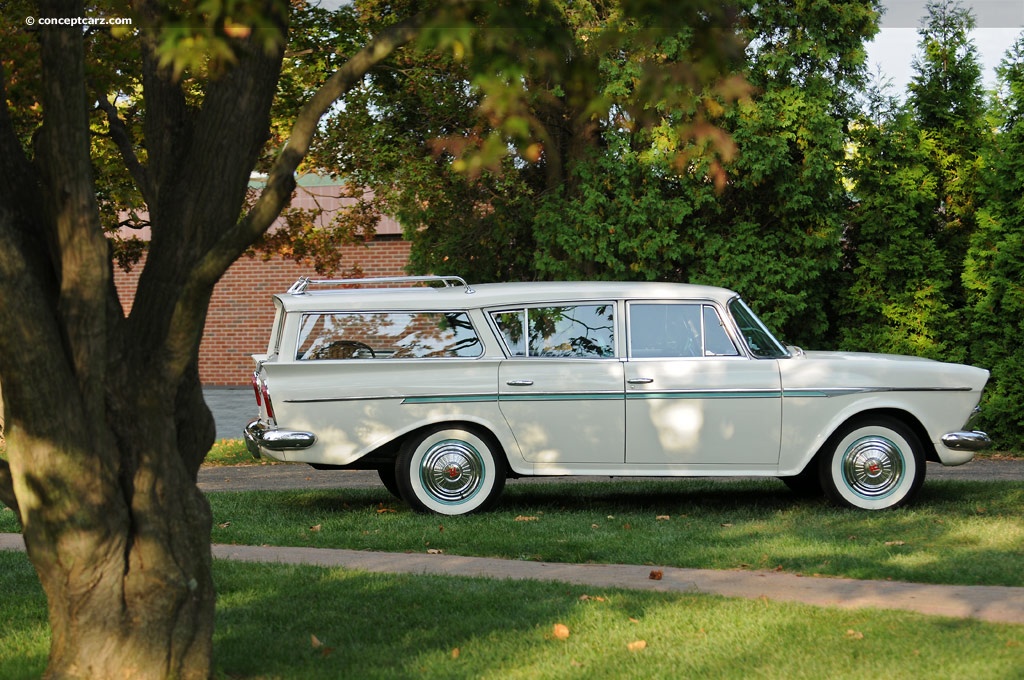 Introduced in 1950, the Nash Rambler was designed to be much smaller than other contemporary vehicles, while still able to accommodate five passengers easily and comfortably. Produced by the Nash Motors division of Nash-Kelvinator Corporation for six years only, the Rambler was responsible for establishing a new segment in the automotive market. Widely considered to be the original modern American compact vehicle, the Nash Rambler was orginally going to be called the Nash Diplomat. Dodge had already reserved the Diplomat name for a two-door hardtop body style, so the Rambler name was resurrected instead.

Introduced during the 1950 model year, the Nash Rambler was the entry model for the low-price segment that had been dominated by models from Ford, Chevrolet, and Plymouth. Riding on a 100' wheelbase, the new model was designed to be smaller in dimension, and lighter in weight than the other popular cars of the time. Nash was able to save on materials in its productions and owners would have better fuel economy by keeping the vehicle smaller. Producing 82 hp, the Rambler's power came from a 173 in³ L-head 6-cylinder engine.

The 'landau' was the designation for the up-maret two-door convertible new Rambler. The Rambler was attempting to gain a positive public image, rather than being seen as an inexpensive little vehicle. The Nash Rambler was equipped with various features that included wheel covers, electric clock, pushbutton radio and whitewall tires.

The Rambler was compact, and the design had a rounded form with an envelop body that enclosed the front wheels. Fortunately thedesign did not impair the vehicles cornering abilities. The Nash Rambler kept the fixed roof structure above the vehicles doors and rear side window frames unlike the traditional convertible of that time period that used frame-free windows. The retractable canvas top used this metal structure as the side rails or guides. The body of the vehicle was considered to be rigid for an open top vehicle, though this design did allow Nash to use its monocque unibody construction on its new compact.

The Rambler line was enhanced to include the Country Club in 1951, a two-door station wagon and a two door hardtop. It wasn't until 1953 that the Nash Rambler received it's first significant restyling which included an all-new ‘Airflyte' styling that the ‘senior' Nash models had received the previous year. Also in this year, a new two-door sedan was added to the lineup.

In 1954 the Cross Country was added to the line-up, which included a four-door station wagon and four-door sedan. The Cross Country rode on a 108' wheelbase, and during the following year, the traditional front wheel wells were open and exposed.

The Hudson Motor Car Company merged with Nash in 1954, with the successor being the American Motors Corpoation.Soon after the merge, Ramblers were badged as Hudson brand cars. Nash Ramblers and Hudson Ramblers were virtually identical, except fo the brand name and some minor brand badging.

The Rambler was no longer branded as either a Nash or Hudson in 1957, but simply as a Rambler in it's own right. A 250-cid V8 engine was finally made available in Ramblers for the first time in 1957. Also, new for this year only was a unique high-performance four-door hardtop sedan model that was named the Rambler Rebel. The Rebel was fitted with AMC's new 327-cid V8 engine which was also used the larger Nash Ambassador and the Hudson Hornet earlier that year.By Jessica DonaldsonReceiving quite an elite status, the Rambler nameplate is responsible for leading the North American auto industry into smaller, more economical vehicle, which eventually received the identity of ‘compacts'. Various companies attempted to build smaller vehicles following the war, with little success. The Nash Kelvinator Corp. of Kenosha, Wisconsin was the one to introduce the first ever compact, the stylish 1950 Rambler.

Introduced at first as a convertible only, the Rambler was an instantaneous hit and the line quickly expanded to include sedans and station wagons. Basically remaining the same, the Rambler only received mild restyling in 1953.

President George Romney took a chance in 1958 and decided to resurrect the smaller Rambler, based on the success of the larger Rambler. He discontinued the large Hudsons and Nashes and chose to concentrate on the smaller models instead. Disgusted and appalled by the size of American cars; which he called ‘gas guzzling dinosaurs', Romney is responsible for coining the word ‘compact'.

In 1958 the all new Rambler was reborn, the Rambler American. Sporting a flashy new mesh grille, and the wheel arches opened up. As the North American economy was fighting a recession, the new Rambler couldn't arrived at a more ideal time as consumers were searching for something smaller and more economical. The Rambler was known as a fuel miser and had won the Mobile Economy Run various times. The Rambler American found a very willing market.

Even though the design of the compact vehicle was old fashioned, 30,640 units of the 1958 model were sold. At a top speed of 86.5 mph, Road & Track magazine reported that the 90-horsepower six-cylinder engine could achieve zero to 60 mph in merely 16 seconds. Faster by 5 seconds than the Studebaker Lark, the 1959 American was a carryover of the 1958. In 1959 AMC added a station wagon that only increased its popularity and the 91,491 units were sold.

Very similar to the 1958 and 1958 Rambler, the 1960 American featured minimal trim changes and the addition of a four-door sedan. 1960 was also the year in which the Big Three, Ford, GM and Chrysler finally responded to the import-car challenge. The Chevy Corvair, the Ford Falcon and the Chrysler Valiant were released, but despite this new competition, AMC managed to sell 120,600 of its Rambler American.

Continuing to be popular, unfortunately the Rambler American lost all of its visual connection with the original 1950 Rambler with the addition of all-new styling, this time square rather than round, though the 100 inch wheelbase was retained.

With unit construction bodies that were susceptible to rust, those early Ramblers are now almost all gone. Though remembered, as the Rambler proved to be reliable, economical and sturdy. The Rambler also performed the very rare feat of having two distinct and successful model runs. A feat that is mostly unheard of in the automobile industry.By Jessica Donaldson

The six-cylinder engine found in the Rambler American developed 90 horsepower from its 195.6 cubic-inches. The rooftop luggage rack was standard on all station wagons. Nearly 50 percent of all Ramblers built in 1960 had automatic transmission. ....[continue reading]