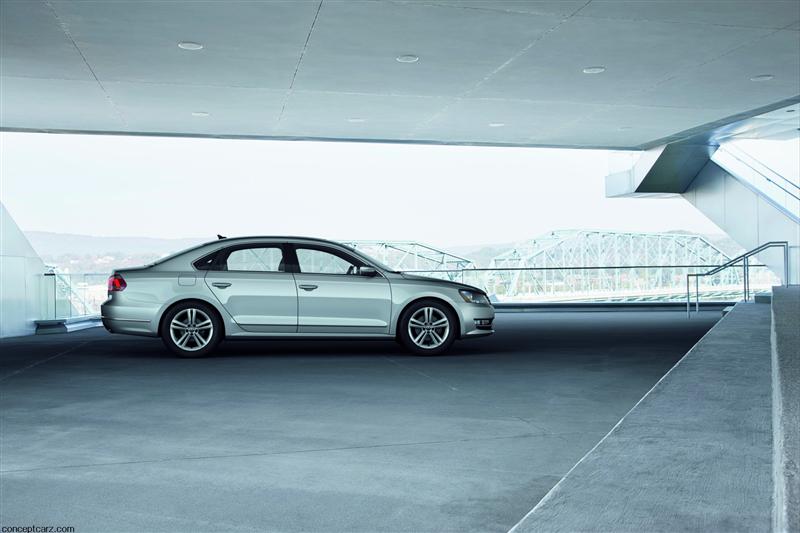 Volkswagen of America, Inc., today announced the world debut of the all-new Passat, a transformational car in Volkswagen's ambitious growth plan for the Ú.S. market.

Designed in Germany and made in America, the Passat was developed as a larger vehicle with premium features and handling characteristics that will perfectly match it with the tastes and lifestyles of Americans. It will be built in Chattanooga, Tenn., at the world's newest, most advanced and environmentally responsible auto assembly plant.

The new Passat, the largest ever, is the only midsize sedan that offers superior German engineering at an accessible price. The Passat TDI — the only clean diesel option in the segment — is expected to deliver 43 miles per gallon on the highway, with a range of approximately 800 miles.

Final pricing will be announced in the spring, but the Passat will start at around $20,000 when it arrives in dealer showrooms later this year. It will come with premium standard features that include automatic climate control and Bluetooth connectivity.

Volkswagen's new Chattanooga plant that will produce the Passat is part of a $4 billion investment by the company in the Ú.S. market. The environmentally friendly facility includes a revolutionary paint shop that significantly reduces emissions. A state-of-the art $40 million employee training center ensures adherence to Volkswagen's exacting quality standards. ( posted on conceptcarz.com)

The Passat will set new benchmarks for safety, driving performance and environmental responsibility in the midsize segment.

The 2.5L five cylinder engine (170 hp/177 lb.-ft.), which is being offered in the Passat for the first time, will be mated to a standard 5 speed manual transmission. (posted on conceptcarz.com) As an alternative, the 2.5 multi port injection engine may be paired with a 6-speed automatic.

The quiet, four cylinder 2.0L TDI Clean Diesel (140 hp/236 lb.-ft.) has the power of a six cylinder gasoline engine and the fuel economy of a hybrid. The Passat TDI is expected to deliver 43 miles per gallon on the highway, with a range of approximately 800 miles. Volkswagen's TDI clean diesel engines, which come with a NOx storage catalytic converter, are among the cleanest engines in the world, fulfilling emissions requirements in all 50 states. Optional on the Passat TDI will be Volkswagen's legendary 6-speed DSG transmission. (posted on conceptcarz.com)

The 3.6 liter VR6 (280 hp/258 lb.-ft.) makes the new Passat a top-flight sport sedan. (concept carz) It offers power and luxury-class driving comfort, with European-type restraint in its fuel consumption — estimated at 28 mpg on the highway.

Gear shifting on the new Passat VR6 is handled by a standard 6-speed DSG; the dual-clutch transmission is considered the most efficient automatic in the world. This technologically advanced six-speed transmission incorporates an automatic dual-clutch system that instantly engages and disengages gears without the need for a clutch pedal. With a special computer controlling the process, one clutch is engaged on the next gear while the clutch from the previous gear is released. The results are crisp, quick shifts, without the loss of power that is experienced with a traditional manual gearbox.

The Passat will be offered in three trim levels, S SE and SEL, with a total of 16 equipment levels. All will offer first-in-class safety and comfort.

The Passat's safety features include Volkswagen's advanced Intelligent Crash Response Systems, which initiates automatic safety protections in a collision — the fuel supply and high consumption electronic equipment shuts off; the doors unlock; the battery terminal disconnects from the alternator cable; the hazard lights switch on.

The Passat will also offer the new Fender premium audio system, designed exclusively for Volkswagen. In a partnership that combined quality automotive engineering and quality sound engineering, Volkswagen and Fender teamed up to bring the raw emotion of live music to the driving experience.

The Passat's balanced proportions give it a unique, timeless and dominant styling reflecting the 'design DNA' developed by Walter de Silva, the Italian design chief for the Volkswagen Group and Klaus Bischoff, the German design leader for the Volkswagen Brand. The signature clean design, with a predominance of horizontal body elements, reinforces the Passat's position as the sophisticated choice in the midsize segment. The bottom line: this car looks much more expensive than it actually is.

The key identifying feature of a strong brand is the styling of its front end. Here the Passat displays the new horizontal brand face, with the grille and headlights forming a single unit. Únlike models in the compact class, the Passat's grille is sculpted in a three-dimensional shape. Moreover, the grille stands more upright and makes a more distinctive and elegant impression in its stricter geometry.

From the side profile, the muscular ridge in the sill area creates a lively interplay of light reflections. Powerfully sculpted wheel arches emphasize the dynamic properties of the Passat. In the balance of the side profile, the roof lines flow toward the back with a nearly coupe-like cut of the rear window. Three side windows create luxury class style with a long, extended glass surface.

The rear section is also dominated by horizontal lines. The lines of the large taillights rise toward the sides, underscoring the dynamics of the elegant rear styling. Another unique feature here is the design of the two-part taillights (integrated in the rear fender and trunk lid).

The Passat shows the look of considerably more expensive cars. The new, larger Passat is 191.7 inches long and has a 110.4 inch wheelbase, which translates into a noticeable increase in rear seating space.

Like the exterior, the interior is also marked by a clean and geometric formal structure. Interior styling consistently follows the maxims of functionality. Controls are attractive and easy to operate.

The instrument panel is similar to that of Volkswagen's flagship vehicle, the all-new Touareg. Chrome trimmed gauges surround a digital multifunction display. A high-end chrome look is also applied to the air vents in the cockpit, and to the surrounds of the radio, navigation system and the climate control panels. The rotary light switch and parking brake handle button are also treated in chrome. Except for the base version, all other Passat trims have chrome interior accents on the window, mirror adjustment and trunk opening switches.

The upper and lower instrument areas are visually distinguished by various decorative accents, depending on the equipment version. Decorative elements in 'Titan' design are used in the S version; the elegant 'Titan Silver Printed' decor is used in the SE version, wood décor 'Autumn Nut Burl' is featured in the exclusive SEL version. The accents not only upgrade the instruments, but also the center console as well as the door trim panels.

The seats are exceptionally comfortable. Even in the base version, the driver's seat is adjustable eight ways, including lumbar support.

The new Passat and the all-new Jetta are expected to be the sales leaders in Volkswagen's plan to significantly increase market share in the Únited States. The company's strategy is built on a broad portfolio of products that offers cars accessible to the majority as well as vehicles for car enthusiasts

Herndon, VA - The world's most fuel-efficient couple has done it again. John and Helen Taylor were determined to break the record for the farthest distance traveled on a single tank of fuel. (concept carz) They decided to attempt the record in the Ú.S. with a stock 2012 Volkswagen Passat SE TDI Clean Diesel vehicle equipped with a six-speed manual transmission. (posted on conceptcarz.com) The previous record for the most miles covered on a single tank of diesel was 1526.6 miles, achieved with a VW Passat 1.6 BlueMotion® diesel in Europe.

The result? A new record of 1626.1 miles, achieved on one tank of ultra-low sulfur diesel fuel under real world driving conditions. That's an incredible 99.5 miles better than the old mark. Over the course of three days and driving through nine states, the couple averaged 84.1 miles per gallon, spending only 4.65 cents per mile. The three-day drive commenced on May 3, 2012 in Houston, TX and ended on May 5, 2012 in Sterling, Virginia. To make the drive as realistic as possible, the couple included 120 pounds of luggage and drove during daylight hours to experience normal traffic situations. Additionally, the couple took turns driving and didn't travel more than 14 hours per day.

'We're excited to have broken the record for the longest distance driven on one-tank of fuel,' said John Taylor. 'The Passat TDI was the perfect car for the trip. It offers plenty of interior and cargo space, yet is frugal enough to help us achieve this record.'

The Passat's 2.0-liter TDI Clean Diesel inline four-cylinder engine produces 140 horsepower and 236 pound-feet of torque and with a manual transmission delivers an EPA estimated fuel economy rating of 43 mpg on the highway. The TDI engine is equipped with a Selective Catalytic Reduction System (SCR) that fulfills emissions requirements in all 50 states. The Passat—built at the world's only LEED Platinum certified automotive factory in Chattanooga, TN—was named Motor Trend's 2012 Car of the Year.

'The Passat was engineered and designed to be a comfortable yet fun to drive alternative in the midsize segment. The TDI Clean Diesel version unites driving dynamics and fuel efficiency that isn't found in the competitive set,' said Rainer Michel, Vice President of Product Strategy, Volkswagen of America, Inc. 'We're honored that the Taylors chose the 2012 Passat TDI as the vehicle to set this outstanding distance record. Their record shows just how economical the Passat TDI can be in the right hands.'

Prior to the drive, the speedometer and odometer were calibrated by a state certified testing station in Houston, Texas. Law enforcement officers from the city of Houston, Texas oversaw validation of mileage, fuel fill-up, and gas tank sealing at the beginning of the drive. A Loudoun County, Virginia Sheriff's Deputy verified completion of the drive and mileage prior to removing the fuel tank seal.

The Taylors have made a career out of driving efficiently and conducting workshops globally on fuel-efficient driving techniques. They have collected more than 90 world fuel economy and vehicle-related records from drives around the globe.Source - Volkswagen

A favorite for consumers searching for a bit more luxury and style in their midsize family vehicle, the Volkswagen Passat fit in the gap between the normal boring family cars and the more expensive ‘out of reach luxury brands. The Passat was featured spunky performance, competent handling, and amazing comfort, even on just the base model. The Passat was built by Volkswagen through six design generations....
Continue Reading >>