VODAFONE McLAREN MERCEDES BRINGS FORMULA 1 TO THE PEOPLE WITH UNIQUE MP4-26 CAR REVEAL IN THE CENTRE OF BERLIN, GERMANY

In a unique event attended by hundreds of fans, Vodafone McLaren Mercedes this morning brought together members of the public to construct and reveal its new MP4-26 chassis, the team's challenger for the 2011 FIA Formula 1 World Championship.

Revealed at Berlin's Potsdamer Platz, the famous public space that sits on the fringe of the old Berlin Wall, the car was built up by dozens of Vodafone competition-winners, fans and customers carrying components into the arena, where the new chassis was gradually pieced together in front of a huge crowd. 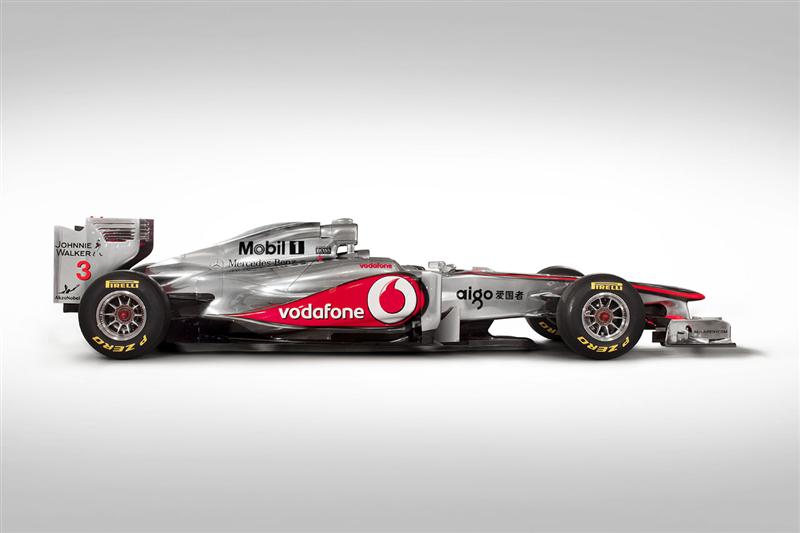 Looking radically different from last year's race-winning chassis, MP4-26 features a range of aerodynamic features designed to take advantage of new rules significantly limiting the amount of downforce that can be derived from the car's underbody.

These most notably include distinctive Ú-shaped sidepods – to feed air more efficiently to the car's rear-end – and a drag reduction system active rear-wing, introduced for 2011 to increase the potential for overtaking.

Beneath the skin, the car houses an all-new electric KERS hybrid system. Vodafone McLaren Mercedes, along with our engine partners Mercedes-Benz HighPerformanceEngines, became the first-ever Formula 1 team to win a grand prix using a hybrid device in 2009, and this new system is expected to further refine that race-winning package.

The team continues for 2011 with the proven driver pairing of world champions Lewis Hamilton and Jenson Button. Between them, they helped Vodafone McLaren Mercedes to five grands prix victories, three one-two results and second overall in the 2010 constructors' championship.

Following today's launch, Vodafone McLaren Mercedes' Gary Paffett will shake down MP4-26 during a private session at the Idiada Proving Ground in Spain on Tuesday February 8 before the team begins track testing at the Circuito de Jerez on Thursday February 10.Source - McLaren

What's changed ahead of the new Formula 1 season

After widescale changes to the technical regulations in 2009 and '10, the 2011 season should prove no different, with a further raft of challenges and opportunities facing our engineers.

With the aim to create more exciting and unpredictable racing, these are 2011's major developments, their primary effects and the ways that Vodafone McLaren Mercedes has approached them:

1. AERODYNAMICS
CHANGE Adjustable front wings & F-ducts out; drag reduction system in
Adjustable front-wing flaps, which were introduced in 2009 to give drivers the ability to dial out any handling instabilities have been dropped to aid simplicity and reduce costs.

Similarly, the F-duct concept, which was pioneered by Vodafone McLaren Mercedes last year to allow the driver to stall the rear wing, reduce drag and increase top-end speed, has been banned. 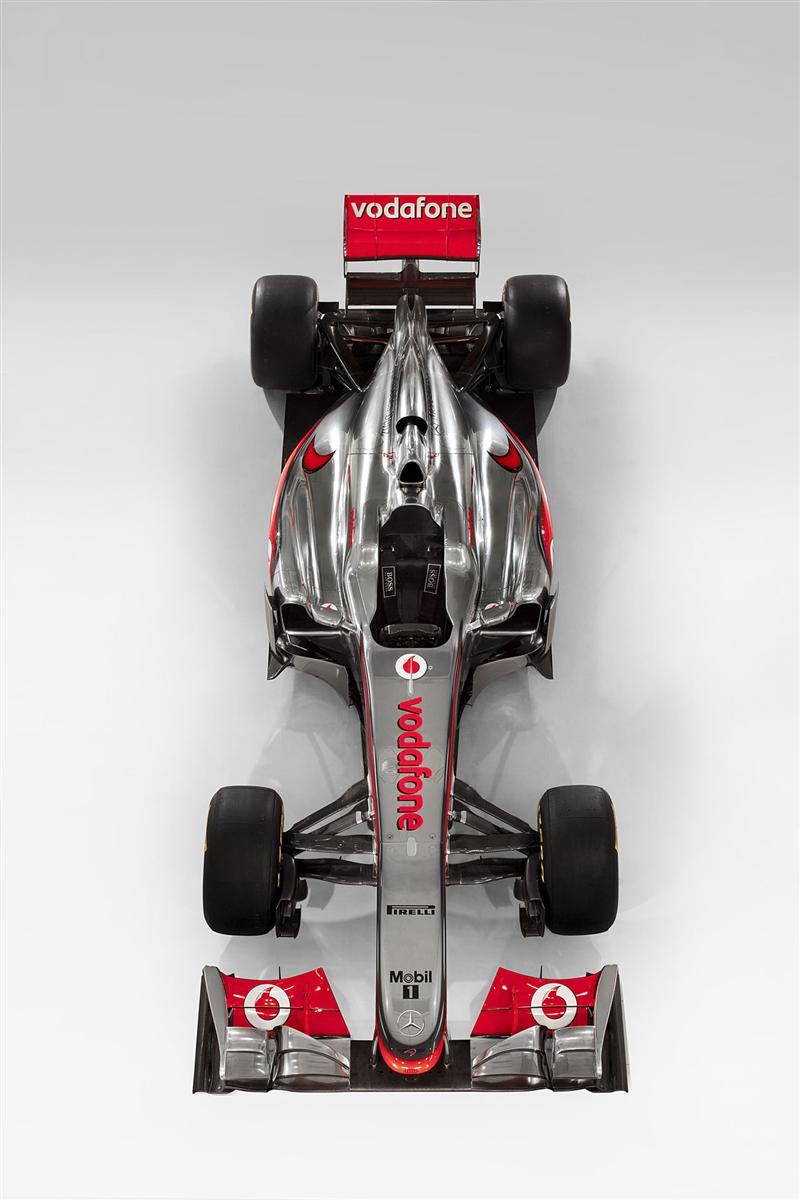 They're replaced for 2011 by a FOTA-led initiative to allow the driver to adjust the rear-wing flap within certain deployment zones controlled by the regulations: the drag reduction system.

The drag reduction system's active rear wing use is unlimited during qualifying, but after two race laps, drivers will be able to adjust the angle of their rear wings between two set positions – at specific points on the circuit and, even then, only when a driver is less than one second behind another.
EFFECT Considerably greater end-of-straight speeds, particularly in qualifying when deployment is unregulated. In races, the drag reduction system should hopefully encourage more overtaking. Potential for its exploitation around restarts, out of yellow-flag periods and between backmarkers could lead to a refinement of its permissible use as the season develops.
CHANGE Double diffusers banned
The wording of the regulations that allowed the use of double diffusers has been rewritten for 2011. New rules mean the diffuser volume is also subtly smaller this year.
EFFECT Limits the increasingly complex and costly ‘arms race' that came from the double-diffuser rules loophole.
While the diffuser will still be a key player in car development, both rule changes mean its overall effect will be reduced – so expect development focus to shift to other areas of the car.

2. POWERTRAIN
CHANGE KERS hybrid reintroduced
Subject to a unanimous teams' agreement to block its use in 2010, KERS hybrid returns this year. As before, it produces 60kW at maximum power and 400MJ per lap and is fully controlled by the driver.
EFFECT If everyone uses a hybrid system, and deploys it at the same points, then it won't be as great a differentiator as it was in 2009. The system won't store enough energy to allow maximum deployment every lap, so judicious drivers could benefit. Úse of double-deployment during qualifying will mean a very big jump between qualifying and race pace.
CHANGE Gearbox life extended from four to five races.
EFFECT An incremental increase, but a valuable cost-saving one: gearboxes could already theoretically last for five races in 2010, so this change will be more about managing the margin and optimising practical use.

3. MECHANICAL
CHANGE Pirelli joins Formula 1
The tyre monopoly switches from Bridgestone to Italian manufacturer Pirelli, which have very different degradation and wear profiles to the Japanese rubber
EFFECT Probably the biggest variable to overcome in 2011: the advantage from quickly adapting to the new tyres could be critical to the championship.
Judging from last year's Abu Dhabi test, both wear and degradation looks quite high. As a result, existing one-stop races are likely to become two-stoppers, and those drivers able to manage and exploit their tyres could profit the most.
CHANGE Minimum weight of the car raised from 620kg to 640kg
EFFECT Weight increase brought about to allow for easier packaging of the hybrid system. It also won't marginalise the bigger drivers. Cars will be heavier on track, and slower through the corners.
CHANGE Fixed weight-distribution
EFFECT Agreed by all teams as protection against the random possibility of the new Pirelli tyres favouring one particular weight distribution. To avoid the potential of a lottery, the teams wrote a regulation fixing forward weight distribution between 45.5 and 46.5 per cent to apply for 2011 season only.
CHANGE Second safety tether fitted to each wheel
EFFECT Reduces the likelihood of wheels breaking away from the chassis in the event of an impact
CHANGE Extended driver protection panels on chassis
EFFECT Protecting the driver from debris penetration

4. SPORTING
CHANGE 107 per cent rule re-introduced
EFFECT For the first time since 2002, any driver who does not set a qualifying time within 107 per cent of the fastest lap in Q1 will not be permitted to start the race. In extenuating circumstances the FIA stewards may grant an exception
CHANGE Ban on late-night working on Thursday and Friday evenings
EFFECT The new working ban effectively means the end of lengthy all-nighters to prep and fit last-minute new development parts during a race weekend. It means teams will need to shift the delivery of new parts to earlier in the weekend.Source - McLaren
Drivers: 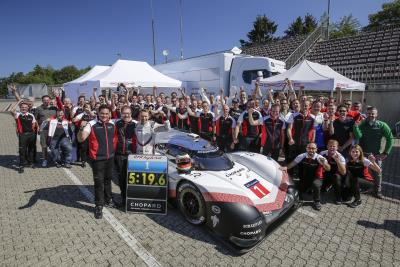 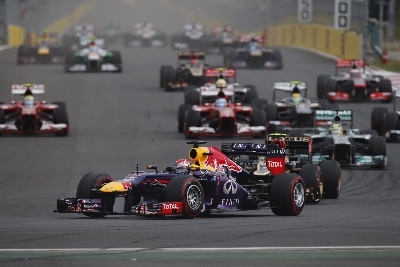 YEONGAM, South Jeolla, South Korea – Sebastian Vettel took his eighth win of the year with a controlled drive to the flag at the Korean Grand Prix, his third consecutive victory at the Yeongam circuit. Mark, unfortunately, was forced out of the... 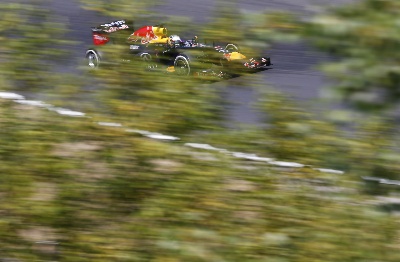 Third And Fourth For Red Bulls In Hungary