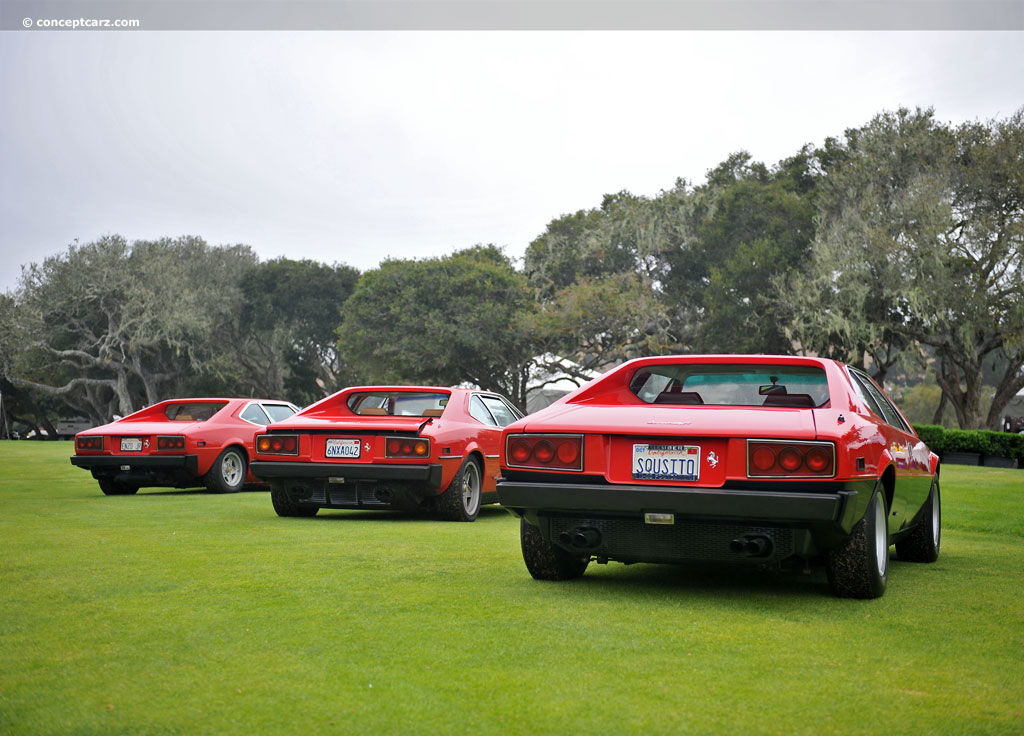 At the 1973 Paris Motor Show, after 20 year of exclusive collaboration with Pininfarina, Ferrari unveiled the Dino 308 GT4. This is a V8 engine model designed by Bertone with a 2+2 seating configuration. The car was positioned in the Ferrari lineup as compliment to the two-seater 246 GT/GTS. The name 'Dino' was retained until the end of 1976 when it was changed to Ferrari due to popular demand. The car remained in production until late 1980, when it was superseded by the Mondial 8.This example is a 1979 European spec vehicle that was imported to the United States in 1982 from Belgium by an individual in Bloomfield Hills, Michigan. The vehicle was driven on a very limited basis for a few years and was then placed in storage from 1988 to 2011. It was sold in December 2011 to Restoration Performance Motorcars in Vergennes, Vermont. A complete restoration was started, but only got as far as the engine and transmission being rebuilt.The current owner purchased the car partially disassembled in June 2014 and had it transported back to Oakland Township, Michigan. It would then undergo a full restoration in September 2014 and was completed in October 2015. All the work was done by the owner except the plating and paintwork. The car was repainted in the original color, Marrone metallic. The interior is original and unrestored, including the carpet. The vehicle was kept in the original, stock condition, with no modifications other than an aftermarket radio and the addition of an MSD ignition.
The Pininfarina designed Ferrari 308 was debut in 1975 and was immediately a success. The vehicles performance, handling, and styling were phenomenal. For the initial 18 months of the 308 GTB's production, fiberglass was predominately used for the bodies, but later switched to all-metal. The fiberglass bodies were around 125 kg lighter. The 308 was capable of producing 255 bhp from its 3 liter, V8, carburetor engine. In 1980, a Bosch K-Jetronic fuel injection system was installed due to new emission regulations. This caused the horsepower to drop to around 215 hp, thus making the 308 GTBi the slowest of the 308 series.
In 1981, Ferrari introduced 4 valve heads for the 3 liter V8's. This 308's now became known as 308 GTB/GTS Quattrovalvole. The engine now produced 240 BHP, and with the extra weight that was imposed due to using all-metal rather than fiberglass, the performance and handling was back to where it was when it began production.
In 1985, Ferrari introduced the 328 GTB/GTS. A vehicle that came equipped with a 3185 cc engine that produced 270 BHP.
By Daniel Vaughan | Aug 2009
One of the most recognizable cars in the world, the Ferrari 308 is probably best known for its role as co-star in the hit TV series 'Magnum P.I.'. The 308 was produced for quite some years, spanning ten years from its introduction in 1975 until the final year of production, 1985. The 308 was replaced by the very similar looking 328 in 1986Ferrari introduced a less inexpensive line of cars called 'Dino' named after Enzo Ferrari's son Dino who died at a young age from muscular dystrophy. Often dubbed the 'baby' Ferrari; this less-expensive model was aimed at less affluent buyers. The Dino was still made by Ferrari with the construction of the Ferrari-designed engine being farmed out to Fiat. To reduce production costs, Fiat shared the use of the engine in their Fiat Dino, a front engined vehicle that didn't look anything like the Ferrari Dino. In 1974 Dino introduced the Dino 308 GT4, or Gran Tourismo 4-cam, with a 3 liter V8 mid-engine. Unfortunately the small V6 of the earlier Dino wasn't powerful enough for this heaver, 4-passenger car.
So this prompted Ferrari to develop an all-new engine for the GT4. This engine no longer said Dino on it, and this time, the whole engine and car were entirely made by Ferrari, and said Ferrari. A truly groundbreaking model, the 308 GT4 2+2 was an exciting achievement for Ferrari. It was the first production Ferrari that featured the mid-engined V8 layout that would lead the way for the history of the company for succeeding decades. This was also the first production Ferrari that featured Bertone bodywork instead of Pininfarina. This caused some dissatisfaction by Pininfarina who lost out by cross-town rival for the design.
Introduced in 1973, the Ferrari 308 GT4 was a mid-engined V8-powered 2+2 car built by Ferrari. The 308 GT4 was produced until 1980 when it was replaced by the Mondial 8. A total of 2,826 vehicles were produced during its production run. The 308 GT4 was sold with 'Dino' badging until May of 1976 when all badging was replaced with 'Ferrari' badging. In November of 1973 the Dino 308 GT4 was debuted at the Paris Motor Show. This car featured angular lines that were totally different from its curvy sibling, the Dino 246. The styling was incredibly unique and controversial for its time, and some journalists even compared it to the Bertone-designed Lamborghini Urraco and the Lancia Stratos. In May of 1976 the 308 GT4 received the 'Prancing Horse' badge, replacing the Dino badges on the steering wheel, hood and wheels. This was the first V8 that Ferrari had ever been put into a road car, and it was a peppy little engine. The Ferrari 308 GT4 handled ‘like a dream car', and was less expensive than ‘true' Ferraris, and was popular as a car for racers who wanted to race a 'budget' Ferrari. It was still not a cheap car, but the biggest problem with this car was the 'wedgy' design by Bertone. Bertone is known best as the company that designed many of Lamborghini's cars, but this wedge shape didn't sell well for Ferrari fans. 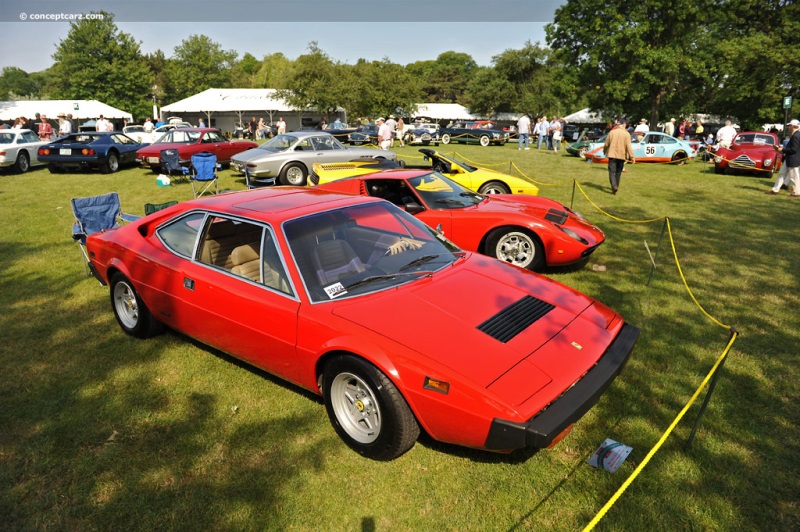 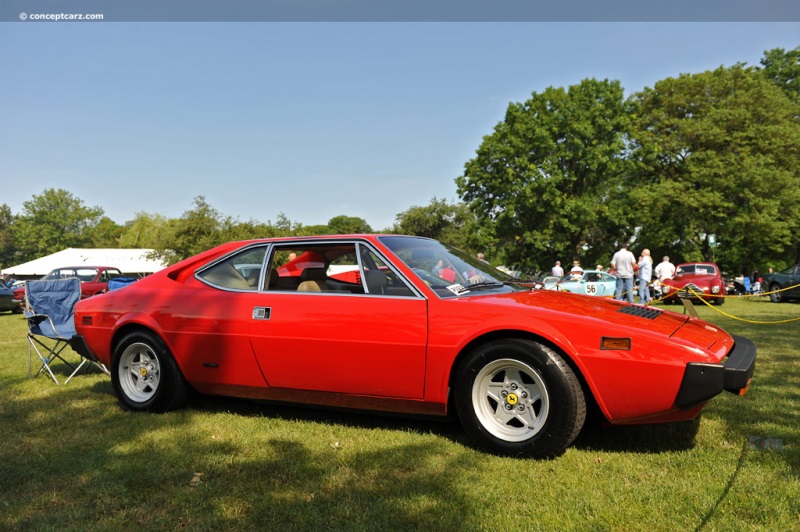 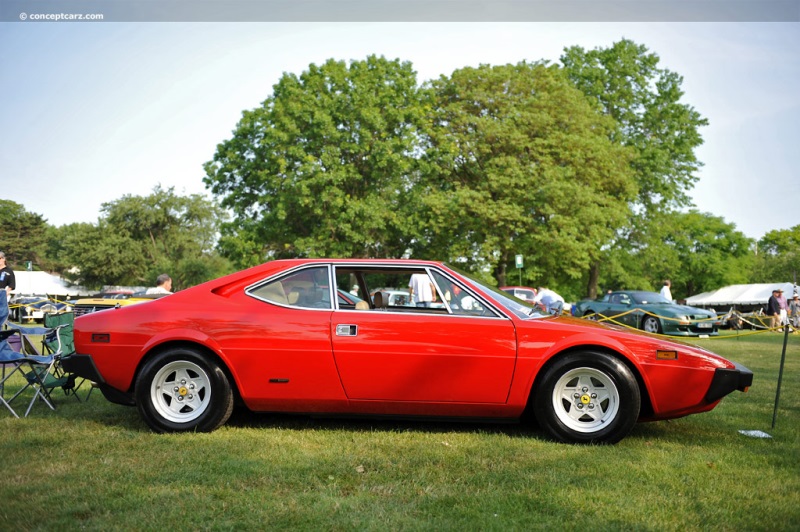 The heart of the 308 series was its three litre V8 engine. The 2926cc Ferrari V8 was something of a departure for the company, which had mostly relied on V12s. With the V8, Ferrari could offer much of the power of their legendary V12s while improving fuel economy and saving space. By placing the engine and transmission transversely Ferrari was able to reduce the length of their new sports cars and concentrate the mass within the wheelbase, a lesson of racing.
The transmission in the 308 was a five speed with reverse all synchromesh unit. Mounted transversely like the engine, the transmission received power through an unassisted single plate clutch. The gears sent power to the rear wheels through a limited slip differential and solid driveshafts with constant velocity joints.Source - Ferrari
Concepts by Ferrari 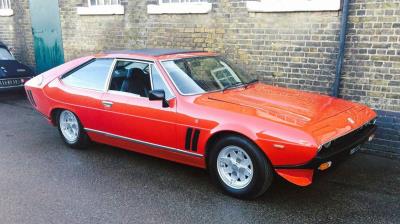 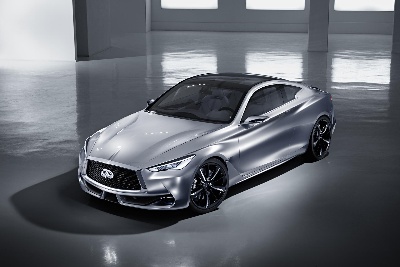 Infinitis vision for a future sports coupe Unique proposition of striking styling and high-performance powertrain in a premium package Previews new family of powerful and efficient engines Hong KongGeneva – Exuding high performance and s...
© 1998-2021. All rights reserved. The material may not be published, broadcast, rewritten, or redistributed.