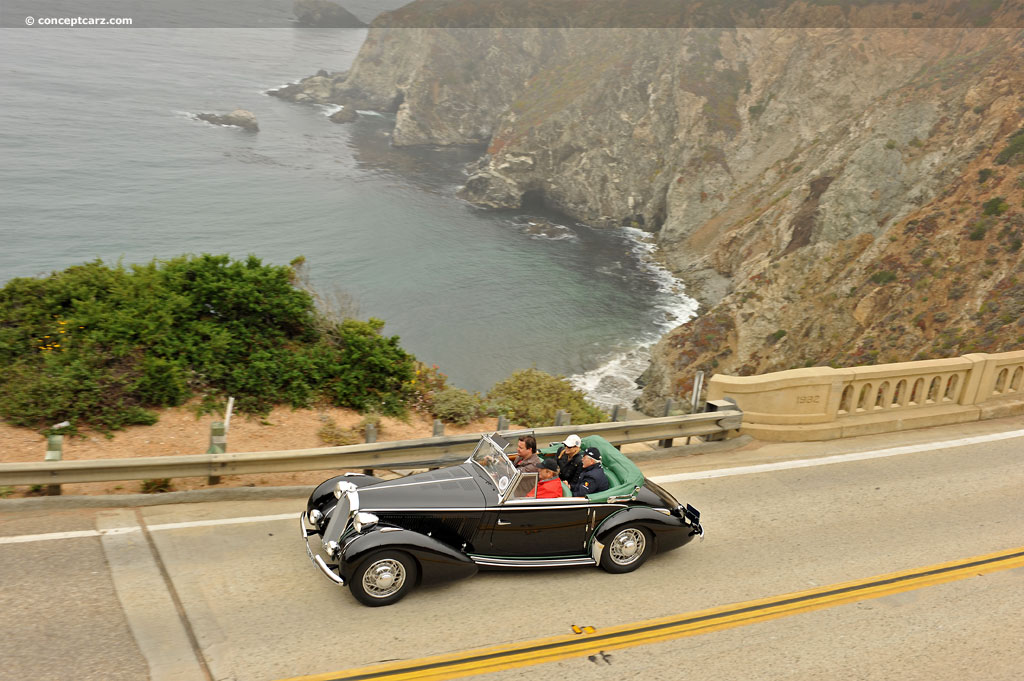 French automakers, just like so many other marque's throughout the world, struggled through difficult economical conditions during the early 1930s with few surviving. One of the French survivors was Darracq/Talbot that was purchased by Italian Major Anthony F. 'Tony' Lago in 1934 from the Sunbeam-Talbot-Darracq (STD) Company. He already had an association with the STD Company as the owner of the gearbox manufacturer. The STD Company had a strong reputation for performance, superior engineering, and durability - a reputation that Lago would attempt to uphold. The sale included the facilities located in Suresnes, France and the rights to use the Darracq and Talbot names. The cars sold in France were known as Talbots while the UK products were dubbed Darracqs.

Engineer and ex-Fiat employee Walter Becchia was tasked with continuing the legacy and to create a new line of six-cylinder engines. After nearly a year of development, the new Talbot Lago models were introduced for 1935 at the 1934 Paris Auto Salon. The introductions consisted of both old and new products; the old products were made new by receiving minor updates and a name change. There were three chassis lengths available and a trio of new six-cylinder engines. The range of engines consisted of a 2.7-liter 15CV, 3.0-liter 17CV and 4.0-liter 23CV. The T-120 featured the 3-liter unit and the T150 had the 4-liter engine. The 3-liter engine used pushrod actuated overhead valves of tradition design. The 4-liter unit was more advanced, with hemispheric combustion chambers, inclined overhead valves, and three-Zenith carburetors resulting in over 100 horsepower. The larger models were fitted with the Wilson pre-selector gearbox.

In keeping with the racing heritage, competition models would soon follow. Built on shorter chassis and often given cycle fender bodies, the T150C was raced with much success during the 1936 and 1937 season. These were later replaced by the T26 which featured a larger, 4.5-liter engine.

The cars that were shown at the Paris Auto Show featured Figoni designed and patented coachwork. Under agreement, the designs could be used the following year on factory production models. What left the factory would vary slightly from the Figoni-bodied examples; the factory-bodied cars were void of running boards that connected the wings in the front and rear together. The two-tone colors and metallic paints, however, was a Figoni designs and used by the factory. Other changes were made along the way to coincide with modern styles, such as the use of chrome and brightwork.

The Talbot T-120 was produced until 1939. Many were specifically tailored to clients' requests by some of the finest coachbuilders of the era. The six-cylinder engine displaced 3-liters and produced about 90 horsepower. Top speed was achieved at around 80 mph.
By Daniel Vaughan | Feb 2014In 1902, the Earl of Shrewsbury-and-Talbot established a company that had strong financial backing, but was without an automobile. Their Ladbroke, England facility would not reach production until 1905, so the eager Earl went seeking an established automaker to provide product to establish his new brand.

His search led him to Adolphe Clement of France, who had been building automobiles bearing his own name since 1897. An agreement was reached, where Clement would provide cars to Talbot, with production continuing in France even after the British car factory came on-line. These early cars were called Clement-Talbots. This brand name would continue for only a short period, for it was dropped when Shrewsbury's operation began producing cars of its own, and Clement was dropped from the badging.

Shrewsbury realized the importance of motor-sports as a marketing tool for his British Talbots. During this time, French versions continued to be produced from the Clement factory, but as time continued, they had less and less commonality with their British siblings.

After several successful racing accomplishments with the Talbot cars, Shrewsbury promoted a new advertising slogan, 'The Invincible Talbot.' This was truly a bold statement, as racing is a continually evolving sport, and new competition is bred on a daily basis. Achieving a high level of success on a continuous basis, is nearly impossible. Being 'Invincible' at every outing, is unthinkable.

Even though the Talbots were not always Invincible, the company's fortunes were positive up to the start of the First World War in 1914, when domestic production came to a stop. A short time later, Lord Shrewsbury elected to leave the company, selling out to Darracq, another French Company. Darracq soon added Sunbeam, another British company, and the new conglomerate became known as STD.

The individual responsible for much of the company's motorsports success, and many of its engine developments well into the mid-1930s, was George Henri Roesch. He has spent a few years working with Renault, before emigrating to England and becoming chief engineer at Clement Talbot, Ltd.

The motor-sports and production car program was considerably successful throughout the mid-twenties. Even with the confusion of origins and product names, when Lord Shrewsbury and Talbot allied with Clement. The British cars continued to sell well in France while the French cars enjoyed strong sales in Britain. The British Talbots were known as Talbots and the French Talbots wore Talbot-Darracq badges.

During the Great Depression, sales declined for STD, and cash reserves soon dwindled. There was a mass resignation by the board of directors following an independent audit, which revealed poor management practices and plenty of other problems. The new leadership was unable to reverse the fortunes of the STD company, and in 1934 the company went into receivership.

Antony Lago
After leaving the Italian Army, Lago (a graduate of the Milan Polytechnic Institute) emigrated to England and found employment with a variety of automotive concerns, including Isotta-Fraschini, the Wilson Self-Changing Gear Co., and briefly with STD, serving with Sunbeam operation in Wolverhampton. He joined Sunbeam shortly before STD's financial demise, and saw an opportunity to rescue the brand. He secured adequate financing and took command of the old factory in Suresnes, France. Talbot became Talbot Lago.

One of the early cars to bear the Talbot Lago name was the T120, which was produced from 1935 until the outbreak of World War II in 1939. It had a stylish design with equally impressive performance characteristics. It had a box section frame and a 3-liter overhead valve inline six-cylinder engine developed by Walter Becchia from a design patented in 1934, prior to STD's collapse. It was an advanced design and would become the predecessor to the famous T150C engine. The powerplant produced 90 horsepower and could carry a roadster to a top speed of over 90 mph.

The six-cylinder unit was mated to a four-speed Wilson Pre-Selector gearbox.
By Daniel Vaughan | Dec 2009

The Talbot-Lago T120 was produced from 1935 until 1939. It had a box section frame and a 3-liter overhead valve straight 6-cylinder engine developed by ex-Fiat engineer Walter Becchia. This T120 was built by the Talbot-Lago factory, hence the title C....[continue reading]