Sold for $671,000 at 2014 RM Auctions - Amelia Island.
Daimler and Benz joined forces in 1926, creating Daimler-Benz A.G. To symbolize this union, a new logo was created. The Mercedes three-pointed star was placed inside of a circle with the names 'Mercedes' and 'Benz' around it, bordered with a pair of laurel branches. The union between these two German companies meant there was now a pair of factories at their disposal. The 'Mannheim'-designated Mercedes-Benz were built at the Benz Works facilities in Mannheim, Germany, while thee 'Stuttgart' cars were built at the Daimler factory in Stuttgart. Both companies had a reputation for creating sporty cars and the union only helped strengthen this characteristic. The Mannheim line-up was introduced in the early 1930s as a replacement to the Type 35. It was designed by Ferdinand Porsche while working at Mercedes-Benz and created by Hans Nibelung. Power came from a inline six-cylinder engine offering 75 horsepower which was sent to the rear wheels via a three-speed manual gearbox. The car had a top speed in the neighborhood of 70 mph.
The Mercedes-Benz 370 S Mannheim Sport Cabriolet was built between 1931 and 1933. Its long bonnet and short tail with twin spare wheels mounted at the rear give the impression of a compact SSK. The 370 S models rested on a shortened wheelbase when compared to its closest siblings, the 350 and 380 models. Performance was lively with 75 horsepower available from the normally aspirated engine, giving them a top speed of 75 mph. The engine was mated to Mercedes' three-speed manual gearbox with overdrive.
Only 183 370 S Mannheims were built, all of which were Cabriolets or Roadsters, and they attracted an impressive clientele, including race driver Rudolf Caracciola.This example features dual rear-mounted spares, giving it the proper Continental appearance. This car bears kommission number 67628, was delivered through the Daimler-Benz branch in Berlin to its first owner on June 8, 1932. The ownership history has been traced back to the early 1950s, when it was in the care of Joe Loecy, of Ohio. Mr. Loecy later sold the car to Ernest J. Toth Sr., also of Ohio. Mr. Toth and his son spent several years restoration the Mercedes-Benz to its original condition. The car's mechanicals were completely rebuilt, and they refinished the body in black and red. The inside features black leather upholstery and the wheels were painted and had polished aluminum rims. This car was shown in regional CCCA activities during the late 1960s, resulting in becoming a Senior award winner. Currently, the odometer shows 30,100 kilometers. The engine is a 3,689cc inline six-cylinder engine fitted with dual carburetors. There is a three-speed manual transmission with overdrive and four-wheel mechanical brakes. 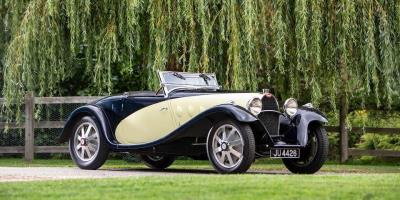 Bugatti Flies The Tricolore At Bonhams

Unique Type 55 is most valuable auction lot sold during retromobile week A magnificent 1932 Bugatti Type 55 Roadster– one of the most important sports cars of Bugattis golden era - was the star lot in the Bonhams Grand Palais Sale, selling for... 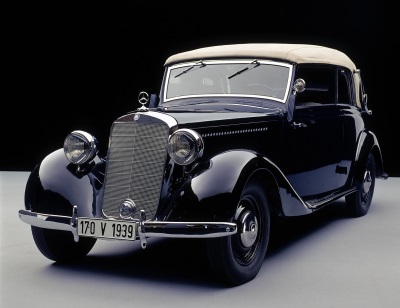 The Mercedes-Benz E-Class is a success story with a great tradition. One of its forebears is the Mercedes-Benz 170 V, which was presented to the world public in February 1936. Driving comfort, downsizing and lightweight construction these were just...

The 1955 24 Hours of Le Mans would end up being the darkest day in all of motorsport when Pierre Levegh launched off the back of Lance Macklins Austin-Healey and crashed into a barrier sending large portions of the car flying through the air acting...
© 1998-2020. All rights reserved. The material may not be published, broadcast, rewritten, or redistributed.