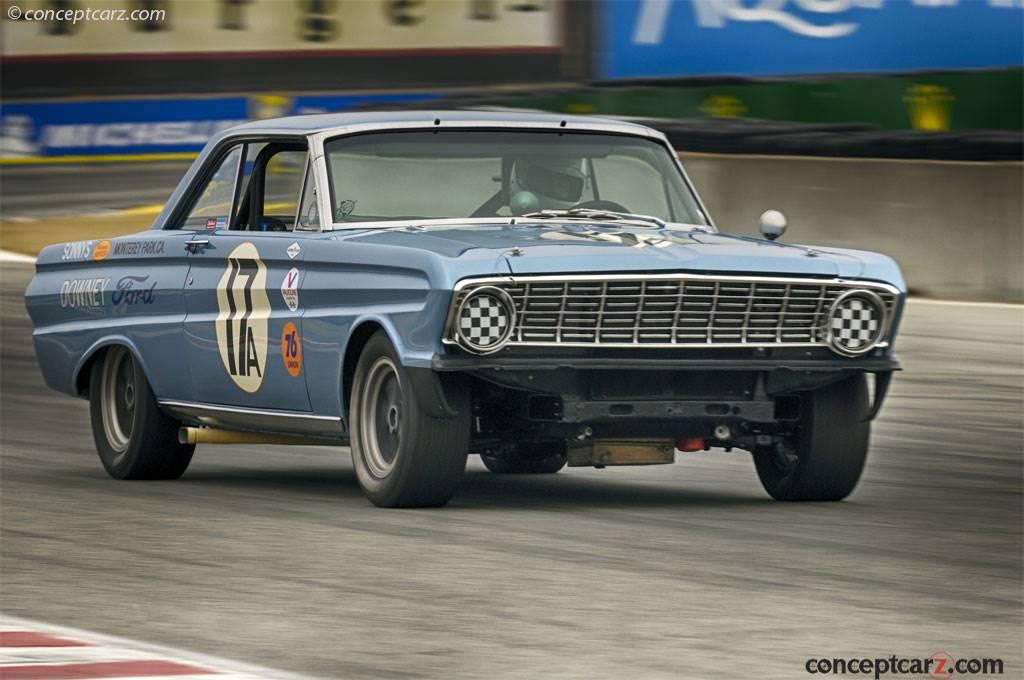 Ford entered the 1960s with its 'Total Performance' marketing strategy that would result in victories at Le Mans and the Indianapolis 500, the latter courtesy of Lotus, as well as bankrolling the most successful Formula 1 engine of all time - the Ford-Cosworth DFV. The Ford Falcon Futura coupe became the company's rally weapon, and although it was compact by North American standards, it was large compared to its European competitors. Among its accolades was finishing 42nd overall at the 1963 Monte Carlo by Bo Ljungfeldt, among 307 entrants. The following year, Ljungfeldt stunned the competition by winning every single special stage of the Rally.

Ford introduced the Falcon on September 21st of 1959 to newsmen throughout the country in a closed-circuit TV News Conference. It was initially offered as an unembellished basic car offered as a 2- and 4-door sedan. By January, the station wagon and Ranchero joined the lineup, and the list of available options continued to grow.

Robert S. McNamara was the General Manager of Ford Division at the time and the driving force for the compact sedan within the Ford lineup. He commissioned a team to create what by American standards of the time a small car, but elsewhere in the world would be considered a mid-size car. McNamara, who was promoted to Group Vice President of Cars and Trucks by the time Falcon was launched, was involved in every stage of the development, insisting on keeping the weight and costs of the car as low as possible. To help keep costs to a minimum, engineer Harley Copp designed a unibody, keeping suspension standard and sourced from Ford's existing parts bin.

The Falcon proved popular, outselling its rival compacts from General Motors and Chrysler when it was introduced in the 1960s. Power was from a small, lightweight 90-horsepower straight-six with a single-barrel carburetor and recorded over half-a-million sales in the first year and over a million sold by the end of the second year. Two new models were introduced for 1961, including a sedan delivery, and a bucket-seat and console sedan model in the higher trim level called the Futura. The following year, a two-door Futura sedan was introduced with a flat rear window in place of the panoramic window on earlier models to bring its design in line with other Ford cars of the era.

The 1964 Ford Falcon Series were given a more aggressive grille and a completely restyled body, with an appearance that was more squared-off and modern. The base engine was an overhead valve 170 cubic-inch engine capable of producing just over 100 horsepower. There were several body styles and trim levels to select from. It was available as a 2- and 4-door sedan, hardtop coupe, sport hardtop, convertible, Sprint hardtop, Sprint Convertible, and station wagons. The top trim level was the 'Futura.' These bodystyles included a chrome horn ring, rear armrests with ashtrays, chrome hood ornament, chrome side window moldings, chrome windshield and rear window moldings. The Futura symbol could also be found on the front fender. There were two horizontal sloping chrome strips on the side of the body. A V8 engine could also be found under the bonnet.

For 1964, the Falcon Station wagons became its own separate series. There were four body styles to select from, a 4-door with seating for six, a two-door version, a Squire station wagon, and a DeLuxe Station Wagon.

Later in 1964, Ford launched the Mustang, based heavily on the Falcon's unitized frame design but with no compromises about its youthful intention. The Mustang could be optioned as the Sprint Package (the 260 V8, a louder exhaust, and a stiffer suspension), resulting in only a small number of Falcon Sprint models sold. Even with the 289 V8 in late 1964, the Sprint was overshadowed by the Mustang and was discontinued after 1965.

The Ford Motor Company produced the Falcon from 1960 to 1970 and during its lifespan, was offered in a wide range of body styles including two- and four-door sedans, two-door and four-door station wagons, two-door hardtops, convertibles, a sedan delivery, and the Ranchero pickup. For several years, the Falcon name was also used on passenger versions of the Ford Econoline van. Variations of the Ford Falcon were manufactured in Argentina, Australia, Canada, Chile, and Mexico.

The second-generation Falcon never really had a chance against its glamourous sibling, the Mustang.
by Daniel Vaughan | Oct 2011

This Ford Falcon Hardtop is finished in Wimbledon White with the origianl Futura hardtop. Power is from a 170 cubic-inch performance six-cylinder engine mated to a 2-speed automatic transmission.....[continue reading]

This 1964 Ford Falcon Drag Car is a former world record holder (the 1973 AHRA National Record Holder). It has a HiPo 289 engine with two 4-barrel carburetors. It has the original McCoy graphics and lettering and is one of the most recognized Falcon D....[continue reading]

This 1964 Ford Falcon Sprint is a '63 Prototype car' that was used as an SCCA Trans-American FIA/GT race car. It has fiberglass doors, front fenders, hood and trunk lid. The car was built by Shelby team driver Bob Johnson and was sold in 1967 to SCCA....[continue reading]