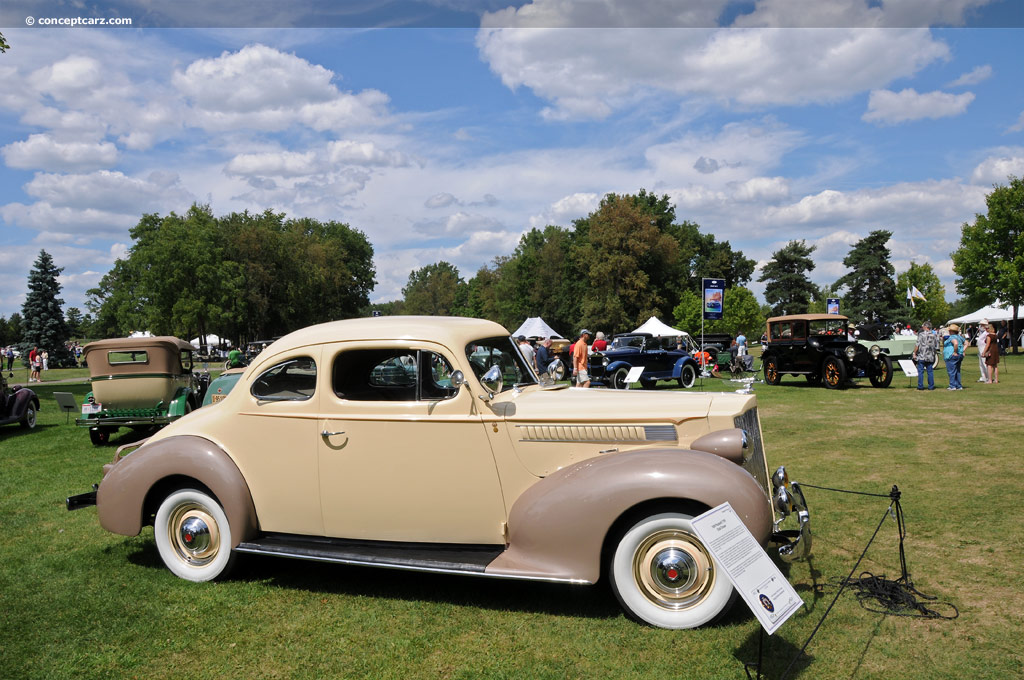 Many automakers did not survive the 1930s due to the effect of the Great Depression. Packard attempted to beat the stock market crash and the resulting economic conditions by manufacturing ever more opulent and expensive cars than it had prior to October 1929. While this tactic worked for some manufacturers - such as Cadillac who had the financial resources of General Motors - it was a risky gamble for Packard. Packard did have a better cash position than other independent luxury marques, which helped it weather the storm. Packard was able to keep costs to a minimum due to the single line with interchangeability between models.

In the mid-1930s, Packard expanded its client base by producing more affordable cars in the medium price range. In 1935, they introduced its first car under $1,000, the Model 120. The public eagerly agreed, and sales more than tripled that year and doubled again in 1936. To produce the 'entry-level' 120 and Six, Packard built and equipped an entirely separate factory. By 1936, Packard's labor force was divided nearly evenly between the medium-priced 'Junior' models and the high priced 'Senior' lines (Twelve, Super Eight, and Eight), although more than ten times more Juniors were produced than Seniors. The Senior models continued to use more traditional coachbuilding techniques that were labor and cost-intensive, while the 120 models used modern mass-production techniques.

The 1939 Packard Six 1700 was powered by an L-head six-cylinder engine that displaced 245 cubic-inches and produced 100 horsepower. It had a three-speed selective synchromesh transmission with column-mounted gearshift controls and a single plate clutch. The wheelbase measured 122 inches and several body styles were available, including a business coupe, club coupe, convertible coupe, station wagon, and 2- and 4-door Touring Sedan.

The exterior design remained mostly unchanged over the prior year. Inside, there were several noticeable changes, including a column-mounted gearshift. Another change was an optional overdrive system called 'Econo-Drive.'

In 1940, the Packard Six became the One-Ten Six, the Junior line received styling updates, and over 62,300 examples of the One-Ten were built. Production of the One-Twenty (now with the hyphen) increased to 28,138 units. The popular Six (One-Ten) and One-Twenty (known as the Eight in 1942) remained in production until the United States' involvement in World War II.
by Daniel Vaughan | Aug 2012

Alvan Macauley became president of the Packard Motor Car Company in 1916 when Henry Joy retired. Macauley would remain in that position until 1938. Packards flagship vehicle during the 1910s and 1920s was the Twin Six and it was a very popular vehicle with those who could afford it. To stimulate sales, generate additional revenue, and to boost production, Packard created a scaled-down version,....
Continue Reading >>

Packard was the leading luxury marque at the start of the Classic era. It was one of the oldest car companies in America, dating back to the first Packard rolling out of the factory in 1899. The company had begun life as the Ohio Automobile Company b....[continue reading]

The Packard One-Twenty was a lower-priced eight that was added to the product line in 1935. It was so successful that it convinced Packard management that a range of models in the mid-priced market would help provide essential financial stability dur....[continue reading]

This 1939 Packard Custom Sedan is equipped with a six-cylinder engine and backed by a three-speed transmission. It is described as 'very original.'....[continue reading]

Honda today honored 32 suppliers that provide indirect products and services to Honda operations across the U.S., including Honda automobile manufacturing and powersports plants. The 32 companies receiving awards were selected from more than 6,000 North...